The dagger-sharp satire of HBO's "Veep," returning for its final season, feels all too real now 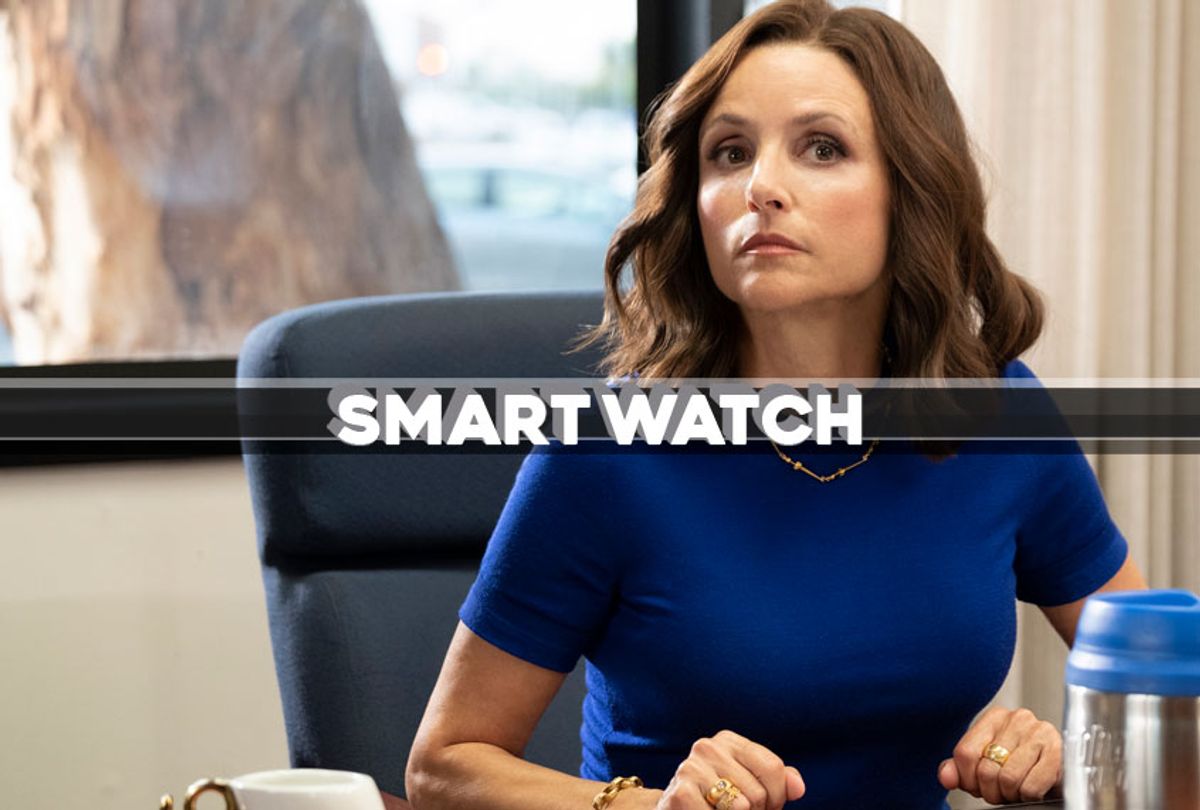 Generally when farfetched satire morphs into reality a person may be tempted to weigh whether the work in question, however relevant, remains funny. Of course, when “Veep” first debuted in 2012, nobody could have predicted how far around the bend politics would hurtle. Initially dropped into the midst of a relatively normal presidency, albeit one weathered by racist birther nonsense and other phobic conspiracy theories, Julia Louis-Dreyfus’ Selina Meyer was introduced to us as an exaggerated version of everything we imagine politicians to be.

In 2019, she and her petty, selfish club of solipsistic enablers are but a more clever version of the morons actually running the institution, only a bit more feckless. On one hand, she realizes the dream of America having its first female president. On the other, she crashed spectacularly.

Although the series' once-distorted reflection of the Beltway's worst tendencies has suddenly become clear and proportional, “Veep” has only sharpened its comedy daggers for its seventh and final season. Wisely, showrunner David Mandel learned from the meanderings of the sixth season, returning to the source of Meyer’s vigor for its final go-round: the campaign trail.

No politician shines as brightly or behaves at their most crass and venal as they do when they’re dancing for votes and money. The difference with Selina is that she wears her disdain as elegantly as her impeccable blouses, barely masking her annoyances with a gleaming white smile.

“Veep” smartly returns Hugh Laurie to the fray as Selina’s main rival and most reliable hate-screw Tom James, perhaps the only being as hungry for power and validation as she. Selina's inner circle keeps the foul-mouthed insanity on the rails and the campaign moving more or less on track, as usual. But in this last run of episodes, the actors don’t behave as if they’re on a victory tour so much as circling back to an already-great series’ peak performances. Tony Hale’s Gary is as obsequious and weird as ever, balanced out by Kevin Dunn’s Ben Cafferty as Selina’s beleaguered campaign manager and Gary Cole’s worn out strategist Kent Davison, two men so used to everything going wrong that they can’t even bother to get worked up over significant stumbles.

Smartly, the series gives a central subplot to Anna Chlumsky’s much abused and underappreciated Amy, whose ill-conceived sexual interlude with self-absorbed Dan (Reid Scott) doesn’t win her sympathy or softness from a team of co-workers who have never offered her so much as a pinky in the way of support. The difference is that now it seems to be dawning on Amy and Dan that the sabotaging hijinks each has participated in or corrected all these years are getting them nowhere, and perhaps it’s time to eye the horizon with a little more seriousness.

Meawhile, Matt Walsh’s Mike McLintock, booted from the fold only to land a position with BuzzFeed (print edition), discovers — much to everyone’s surprise — that he’s actually not completely inept at something. Compared to the perpetually horrible Jonah (Timothy Simon), who continues to punch way above his weight class in jumping from Congressman to presidential candidate, Mike looks like a genius.

What’s crazy is the notion that the series doesn’t overtly count anyone out in this party-agnostic sack race to the White House, regardless of how insane the proceedings get. Everyone’s a little insufferable; even Selina’s daughter Catherine (Sarah Sutherland) and daughter-in-law Marjorie (Clea Duvall) seem almost too sensible to be believed.

They, along with guest stars Diedrich Bader, Patton Oswalt and Sam Richardson, at times serve as a Greek chorus of sanity amidst the rapid-fire spray of expletives and off-color one-liners. Or I should say Richardson’s Richard Splett goes along with the crazy flow more than he protests, which in a way makes him an apt stand-in for those of us who are willing to sit by and watch Washington's failure show unfold with disinterest, regardless of its detriment to democracy.

The raucous good time of these new half-hours notwithstanding, one does wonder whether “Veep” will leave us in an uplifting place or choose to taxi on a runway between sweet victory and brutal reality. Meyer’s slogan is “New. Selina. Now.” Even she isn’t sure what that means, or whether it’ll close the sale.

But if the span of time between 2012 and now has taught us anything, it's that the American voter will place anyone in power who can hawk a bill of goods in an exciting way. The difference between the show’s fiction and our new reality is that Meyer probably isn’t bent on destroying the planet for the delight of watching the little guy suffer. After all, without the people on her side, who would stroke her ego?

It takes a high level of stamina for a person keep all his machinations and lies sorted out, especially when the person in question is a spy. "Mrs. Wilson," the three-part “Masterpiece” limited series airing its first two hours this week, isn’t about the secret missions undertaken by Alexander “Alec” Wilson, but his legend as it was witnessed through the perspective of his wife Alison.

Alison met Alec when they both worked for British intelligence and quickly fell under his spell. She was a typist, he an operative and the author of several popular thrillers, and handsome enough to make any woman leap at the opportunity to be Mrs. Wilson. Only after Alec dies does Alison discover that she is not the only woman to succumb to his charm.

“Mrs. Wilson” is a quiet piece that revolves almost entirely around Ruth Wilson's performance as the title character — her own grandmother. Alec Wilson is Ruth’s grandfather (played here by the perfectly cast Iain Glen) and she constructed the miniseries from Alison’s memoirs. Thus the focus remains tightly on the character of Alison as she strives to find answers about who her dashing, adventurous husband truly was. Just when she believes she's uncovered the truth, another subfloor collapses beneath her.

Flanked by Glen and a flinty performance by Fiona Shaw, Ruth Wilson, familiar to “Luther” viewers as the chilly sociopath Alice Morgan, overflows with feeling and pathos here, no doubt informed by her closeness to the story. And there are moments where Wilson simply slays the scene with such ferocity that one ceases to be distracted by the realization that she’s playing her own father’s mother.

The mind-boggling nature of this conundrum of the human heart, laid bare on the screen, is fascinating enough to warrant spending time with this period piece, but the close-to-the-bone performances keep a person locked in.

As someone who loved the perfection of what ended up being season 1 of “Barry,” Bill Hader’s dark comedy about a hit man determined to retire from the business who accidentally reconnects to his humanity by way of an acting class, I greeted the news of its second season with a load of mixed emotions.

“Barry” was originally conceived as a limited series, one that ended in a flawlessly devastating moment in which Hader’s guilt-ridden killer is denied his smooth transition into happily ever after. On a weekend getaway where all seems right with the world at last, the very nice female cop for whom his acting coach Gene Cousineau (Henry Winkler) has fallen discovers Barry's secret. With agonizing regret, he has to end her. The season's close came moments after this, culminating in the sort of ambiguous heart-punch that would have been lovely to leave right as it was — cut to black, the end, full stop.

But now that I’ve seen the first episodes of its second season, it is nice to have Barry back, even though I still hold that shows conceived as one-and-done stories should not be extended.

“Barry” is an exception, somewhat, because it contains enough weird, sweet, funny, rumpled and sinister characters to make a few more half-hours worth watching. Winkler’s Emmy-winning rendition of drama teacher Cousineau is reason alone to justify a stay on the schedule. Just know that “Barry” is no longer a comedy per se but a dive into an increasingly sad and hollow man’s attempt to grasp some shred of happiness that keeps eluding him, as a number of clowns (some of them killers) float in his midst.  Having said that, Hader (who also netted an Emmy for his performance) maintains the tautness of his portrayal.

One bonus is that due to more screen time for Anthony Carrigan’s Chechen mobster Noho Hank and Stephen Root as Barry’s reluctant former handler Fuchs, this new season evolves from a solo feature into a loose ensemble act where nobody can truly trust anyone. Barry can’t even trust Gene, a man grieving the loss of his great love, who finds new inspiration in digging up his student’s long-suppressed landmines. Whether this new method is for the sake of art or to twist the emotional knife in Barry's center is hard to say as the season begins. But the dynamic is captivating enough to make us want to see this addition to Hader's caper through to the finish.