Donald Trump proves tax code spawns risk, debt & speculation for which everybody else pays the price

Rigged tax code protected Trump as one hair-brained, over-leveraged investment after another died on the vine 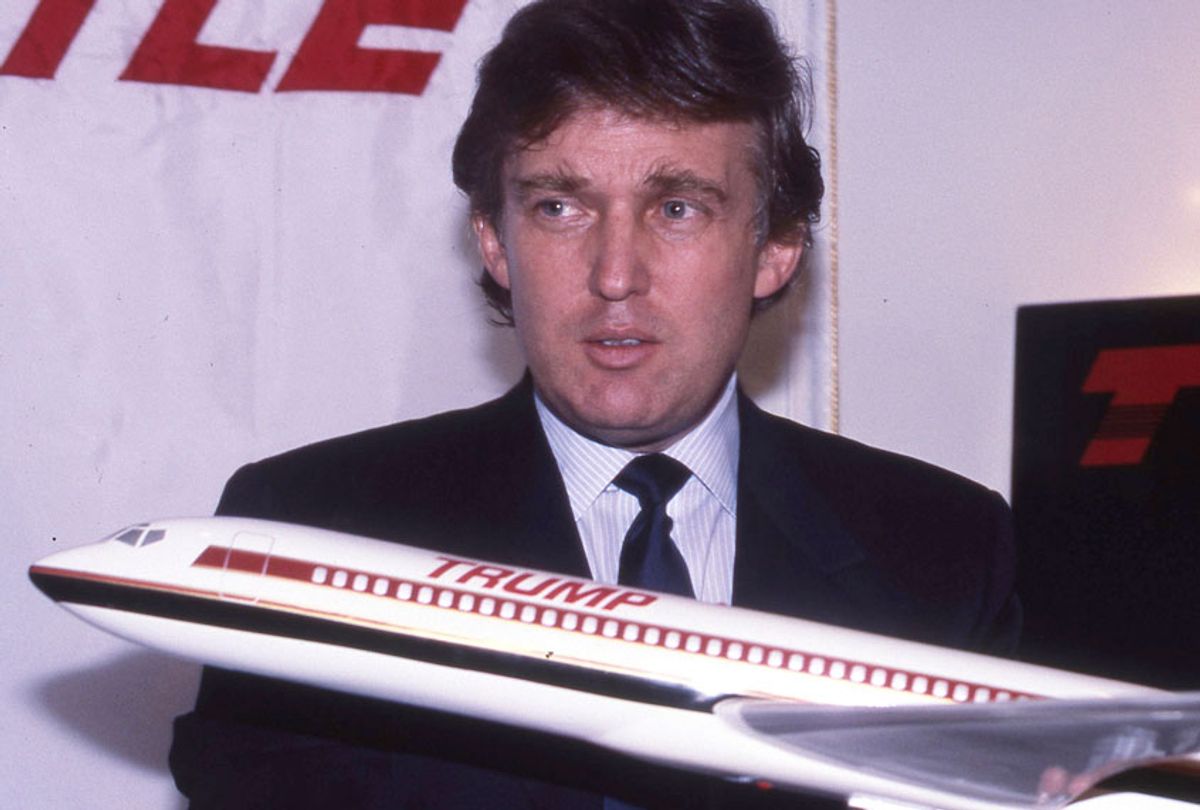 Donald Trump at a press conference to mark the launch of his Trump Shuttle airline on June 8, 1989 at the Plaza Hotel in New York City. (Walter McBride/MediaPunch /IPX)
--

The New York Times disclosure that Donald Trump  was able “to avoid paying income taxes” for years, while he racked up $1.17 billion in losses, tells you all you need to know about the American system of taxation that rewards risk, debt and speculation because it so completely insulates the greediest among us from the real world consequences of all three.

The Times compared their Trump file “with detailed information the I.R.S. compiles on an annual sampling of high-income earners. His core business losses in 1990 and 1991 — more than $250 million each year — were more than double those of the nearest taxpayers in the I.R.S. information for those years.”

We know that our tax system taxes wages we earn at a much higher rate than the profits the rich earn off their investments. But it’s more perverse than that because it actually incentivizes the most predatory traits of vulture capitalism.

To be sure, over the years the plume of red ink coming out of the Trump corporate octopus has proven toxic for an army of small business owners and investors.

In Atlantic City, corporate entities tied to Trump filed for bankruptcy four times since 1990, allowing the companies to shed hundreds of millions of dollars in debt, but leaving a long list of businesses that did not get paid. The losers included small businesses and tradespeople.

Back in October 2015 when I interviewed Trump for CBS MoneyWatch he was nonchalant about the human carnage of his Atlantic City serial bankruptcies. "That's part of the process," he said. "I wanted to use the bankruptcy law to my own advantage. Should I have used it to somebody else's advantage? These people may have gotten clipped at the end, but they made a lot of money along the way with me."

To plumb the depths of the despair the Donald had wrought all I had to do was cold-call ministers from congregations in and around Atlantic City.

Rev. John Scotland, pastor at the Community Presbyterian Church in Brigantine, near Atlantic City, said Trump "has no regard for who he hurts. He's devastated small businesses and tradespeople down here. He victimizes people and tells them he's teaching them a lesson."

Rev. Scotland put me in touch with Bill Gamble of Absecon, New Jersey who had the misfortune of carpeting Trump’s Castle Hotel and Casino. “I don't hardly know a contractor that didn't get hurt by Trump," Gamble said.

Carpeting The Castle Hotel and Casino was a project that took a crew of 10 workers three months to complete. "The carpet guy is always the last guy after the carpenters and electricians, so they push you and have you work double shifts, which runs up the overtime."

To dismantle this rigged system that rewards the rich and punishes everybody else we have to educate ourselves on its built-in features. It not just the rate of taxation, or the facility with which the wealthy can avoid taxation, but it’s also the behaviors that the tax system rewards.

and a Global Justice Fellow at Yale University. He is an expert on the American tax system and was one of the founders of the Tax Justice Network, a British based NGO that tracks trends in off-shoring and corporate tax avoidance.

“We had a lot of neo-conservative economists back in the 1980s and early 90s arguing that we should have lower taxes on capital than labor because that would encourage economic growth,” he said in a phone interview. “We basically went off on a binge during that whole period and I think Trump was on the scene making one bad investment after another.”

In commercial real estate, building owners benefit from a precept that buildings lose their value over time even though their actual cash value has grown, sometimes exponentially. That so-called ‘depreciation’ can be deducted from their taxes as well as the interest from the debt which moguls incur when they borrow, as they almost always do, to purchase multi-million-dollar properties.

They can further shelter their wealth and profits through forming trusts so they can pass along their fortune while greatly reducing, if not zeroing out, any possible tax liability.

“We have generous tax deductions and depreciation allowances and it is especially true in the case of the real estate industry where Trump is ensconced,” said Henry. “You have this combination of accelerated depreciation and interest deductibility which just encouraged everybody to go head over heels into highly leveraged real estate investments.”

He continued, “There’s a whole chapter to be written in the history of Trump and the role of the tax system in giving him a repeated rebirth.”

Brian Aryai, is the CEO of Icon Compliance Services and had a distinguished career as a Special Agent with the IRS. He says the Trump saga is emblematic of the

“unfairness of the tax code, when as a business entity you can have massive losses year after year for tax purposes, while in reality, you are earning millions or billions.”

“Add to that shortcoming dwindling resources for enforcement, scarcity of audits, and you have a toxic formula for an extremely inequitable tax code,” Aryai wrote in an email. “We only have our legislators to blame for creating this mess, where the average worker on a W-2 wage pays a higher rate than the fat cats flying to their favorite vacation spots on private planes . . . . Finally, powerful and well-funded lobbying forces maintain the status quo and keep our legislators in check to prevent corrective action.”

But it is not just the Federal tax code that was made even more favorable for the Donald Trumps of the world by the  GOP 2017 re-write.

Local governments control zoning which determines what can be built and where. That, in turn, determines the potential value of the real estate. The denser and more commercial the use usually the higher the value of the land.

Nowhere are the zoning stakes higher than in New York City where international capital sees real estate investments as one of the world’s safest investments.

James Parrott, the Director of Economic and Fiscal Policies at the New School’s Center for New York City Affairs says, even as the city struggles to build affordable housing, it makes developers like Donald Trump even wealthier overnight by “up-zoning” their real estate but the public gets no cut in the action.

“in most of the re-zonings the City does it involves up-zoning that permits a denser scale of development or permits commercial where manufacturing or residential had only been permitted before,” Parrott said. “That has the potential in most cases to tremendously increase the value of that land and all of that accrues to the developers.”

He continued, “So, New York City, especially in the last 15 years has had a lot of real estate development and rezoning and the city has tremendously, through its actions,  bolstered the incomes of the billionaire real estate developers . . . . and Donald Trump benefited from that when he was active in that area but he certainly was not alone.”

“Why can’t you think of a mechanism that would allow the city to capture some of that appreciation in land value?” asked Parrott. “The city has not done that of course because the real estate investors write the rules.”

To get a sense of how the gears of this oppressive mill of injustice grind contrast how we treat the millions of Americans behind in their student loans with the likes of Donald Trump.

Americans can’t escape the indenture of their student loans because they can’t discharge them through bankruptcy.  But that same bankruptcy code enabled Trump to repeatedly escape the consequences of his bad business bets and behavior.

There, in a nutshell, is what’s so upside down about this country. Our system uses student debt as social control for millions who tried to invest in themselves, but it extends carte blanche to a snake oil salesman like Donald Trump who was never been given a reason to learn impulse control.