Karen Gillan, who plays Nebula in "Guardians of the Galaxy," made an insightful observation about Gunn's artistry 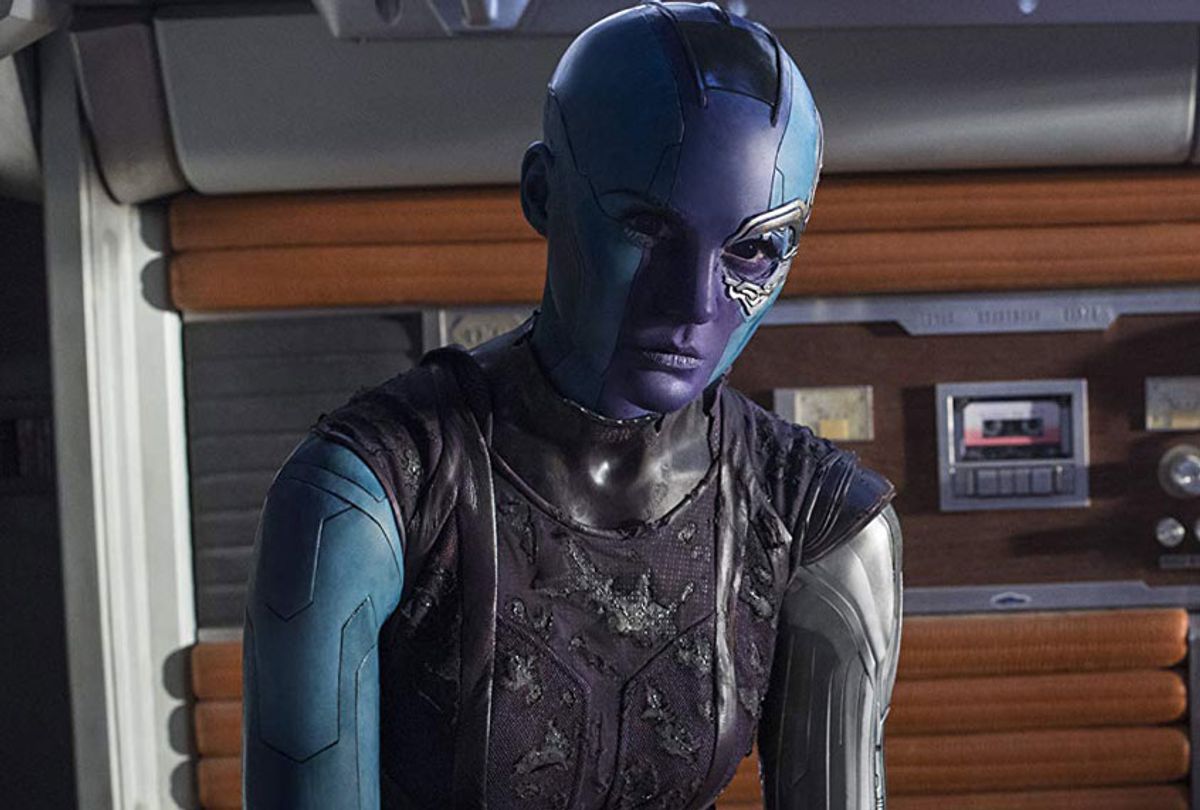 Karen Gillan in "Guardians of the Galaxy Vol. 2" (Marvel Studios)
--

Hollywood is often an ugly place — not on the outside, perhaps, but certainly on the inside — and tales of nobility and selflessness, while they certainly do happen, are painfully rare. A similar point can be made about finding high-quality art in major blockbuster franchises: Some of them veer from the safe creative formulas and become memorable and good instead of generic and disposable, but that happens rather infrequently.

As a result, when a story emerges from Hollywood of people being kind and recognizing the value of individual artistry, it should be embraced as an antidote to the siren song of cynicism.

This brings us to the kind words recently uttered by "Guardians of the Galaxy" star Karen Gillan about James Gunn, the writer and director of the Marvel Cinematic Universe's most eccentric, playful and out-of-the-box franchise. Gillan — who plays Nebula, the blue-skinned daughter of Thanos (Josh Brolin) who wishes to murder her dad for repeatedly torturing her as a child — was talking to the Los Angeles Times about Gunn's firing and reinstatement.

For those of you who don't recall, the "Guardians of the Galaxy" helmer was publicly fired from the third movie in July after right wing trolls drew attention to distasteful jokes he had made years ago. Gunn offered a heartfelt apology for his jokes and the entire cast of "Guardians of the Galaxy" wrote a public letter defending him. In their statement asking Disney to rehire Gunn, the cast made it clear that were "not here to defend his jokes of many years ago" but to express support for someone they viewed as a friend from having worked on two movies with him. They thanked him for helping them "tell the story about misfits who find redemption," said they looked forward to working with him in the future and expressed concern about "character assassinations" and "weaponizing mob mentality."

When Disney actually did rehire Gunn in March, thereby allowing him to complete the "Guardians of the Galaxy" trilogy, Gillan seemed to sum up the thoughts of the cast when she tweeted, "We are groot." In her interview with the Times, she elaborated.

"I was so happy because it truly feels like we’re part of this little family on 'Guardians,'" Gillan explained. "And to have your leader ripped away from you is a really weird feeling. I feel that it wouldn’t be the same type of 'Guardians' movie without him. So much of it is his personality. The sense of humor, his taste in music, the characters — there’s so much of him in there, so that would have been quite a strange sensation to make it without him. We were just so happy when he came back. It feels like everything’s as it should be now."

There is a lot to unpack in those comments, and they are worth exploring in depth.

First, there is her astute analysis of what makes the "Guardians of the Galaxy" films so fresh and vital, especially when compared to other entries in the superhero genre. Because blockbuster films costs hundreds of millions to make, and are expected to gross hundreds of millions more in return, studios have a habit of stifling creativity in order to guarantee a bankable product. This is especially true of the Marvel Cinematic Universe, where the need to make each film into an episode of a glorified television show often outweighs the desire to provide each motion picture with its own ethos, its own sense of identity.

That has never been a problem with the "Guardians of the Galaxy" franchise, and a tremendous amount of the credit for that rests with Gunn. As Gillan pointed out, his sense of humor, deft use of music and ability to create three-dimensional rogues are all instrumental to the success of the first two films.

The running joke in "Guardians of the Galaxy" is that the supposed heroes are violent, socially inept and frequently dishonest scoundrels who aren't too far removed from the criminal pasts that caused them to meet one another in the first place. They have good hearts and ultimately want to do the right thing — both for the galaxy and for each other — but they are also highly dysfunctional.

Star-Lord has a dangerous mix of braggadocio and stupidity, Rocket Raccoon pushes people away with cutting jokes that conceal deep inner pain, Drax's inappropriate bluntness frequently makes everyone else uncomfortable and Groot's self-sacrifice causes him to go from being an adorable baby to an angsty teenager.

Yet beneath the quips and edgier moments, the series also has a tremendous amount of heart. This is true for every major character, from the paternal relationships between Rocket Raccoon and Groot or Yondu and Star-Lord to the budding friendship between lonely characters Drax and Mantis. Gunn puts tremendous care into making sure that every character in the ensemble receives an arc, even potentially throwaway teeth-gnashers like Taserface (Chris Sullivan). Never is this more apparent, though, than in the rivalry between Nebula and Gamora. As Gillan told the Times, "James Gunn created this character with these really clear motivations for being the way that she was, so it was easy to perceive her as a villain. But then to look at her reasons behind that, you understand her and have more empathy towards her — and then she’s not so much of a villain anymore."

Finally there is the music. The soundtrack is as much of a character in the "Guardians of the Galaxy" series as the titular heroes themselves, with the movie wisely incorporating Star-Lord's '70s and '80s playlists into the story (he carries music with him to connect with his home world, Earth, and remind him of his mother). It's telling that, after the first "Guardians of the Galaxy" movie brought Blue Swede's cover of "Hooked on a Feeling" back to the limelight, other superhero films also tried to sell themselves by connecting their brand with a beloved rock classic ("Suicide Squad" with Queen's "Bohemian Rhapsody," "Thor: Ragnarok" with Led Zeppelin's "Immigrant Song"). Yet while those songs work to capture the ethos (or at least the intended ethos) of those films, the soundtrack in "Guardians of the Galaxy" is necessary to understanding its deeper meaning. There is even an entire scene in the second film where Kurt Russell's villainous character Ego deconstructs "Brandy You’re a Fine Girl" by Looking Glass for Quill — and does so to strong dramatic effect in the main story.

While "Guardians of the Galaxy" is an ensemble effort and it would be unfair to shortchange the rest of the creative talent behind the series, it's fair to say that Gunn is the auteur force behind why those movies stand out. While there are many great Marvel movies, "Guardians of the Galaxy" is the only series that one could plausibly argue might appeal to people who don't like superhero flicks. It works just as well as science fiction, fantasy, action, thriller or adventure, and in an industry where studio mandates frequently override individual initiative, the fact that Gunn has left such an indelibly personal stamp on a major franchise (one that had been obscure before he touched it) is a testament to his talent.

It is also, of course, a reflection on the fact that he is clearly deeply loved by the people who work with him. That is no mean feat in Hollywood, and when Gillan described being part of a "little family," it is hard not to see the parallel between the dynamic which obviously existed on the set and the stories being told in the movies themselves. This didn't have to be the case — plenty of great movies have been made by people who pretended to love each other when the cameras were rolling and then hated each other as soon as they stopped — but apparently, at least this once, the underlying friendships were real even if the story told through them was an illusion.

In an industry where mandated mediocrity and personal mendacity are too often the norms, it is refreshing to hear of a story where people supporting each other prevailed — and in the name of a blockbuster film franchise that also deserves to be regarded as quality art.