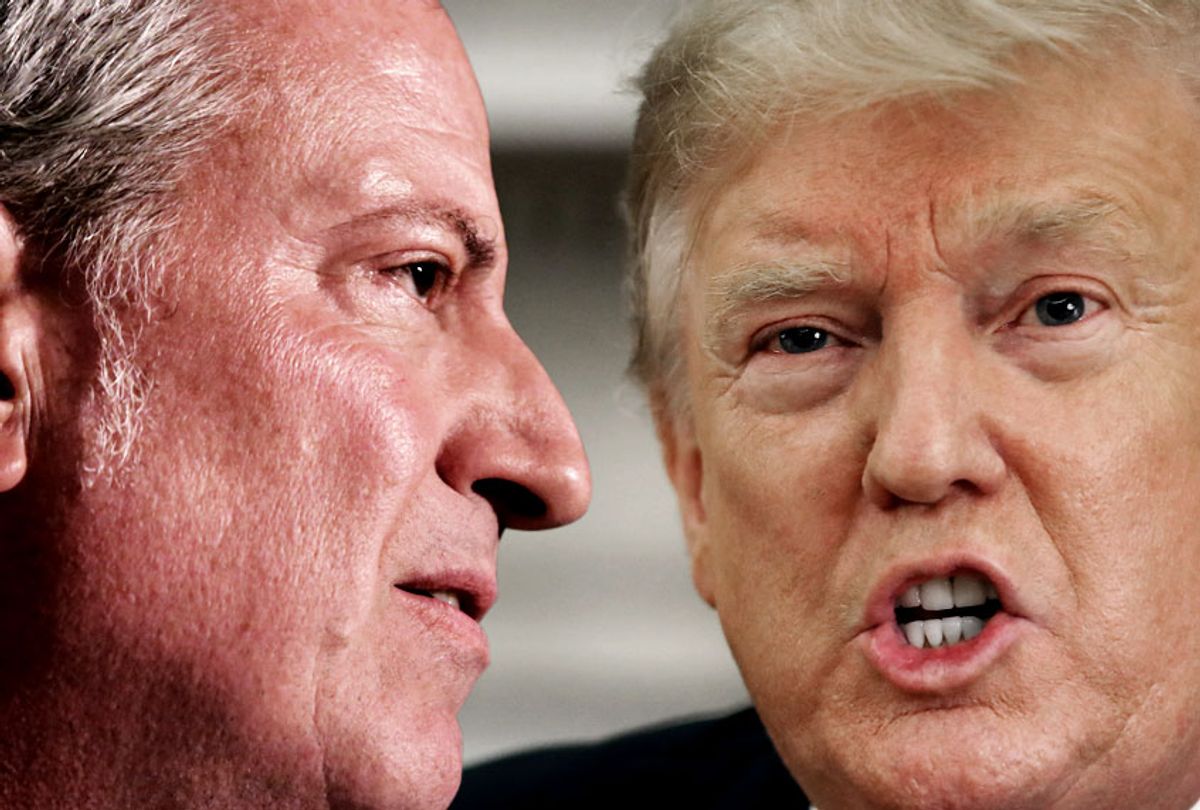 New York City Mayor Bill de Blasio has placed the Trump Organization on notice. And if they do not clean up their act in terms of global warming, it could prove costly.

In a statement released Monday, de Blasio said that "our message is loud and clear. We’re tackling climate change head-on with NYC’s Green New Deal and are the first city in the world to require all big buildings to cut their emissions, with the goal of a carbon neutral city by 2050. President Trump – you’re on notice. Your polluting buildings are part of the problem. Cut your emissions or pay the price."

An accompanying news release also declared eight big buildings in the city owned by Trump to be "dirty" and "inefficient," claiming they "pump approximately 27,000 metric tons of greenhouse gases into our air each year — the equivalent of 5,800 cars." In total, de Blasio warned the Trump Organization it could owe $2.1 million a year in fines beginning in 2030 if it does not act now:

The release also did not mince words about the impact of man-made climate change, which Trump has repeatedly denied to be a serious problem.

"Over many decades of study, scientists have reached an overwhelming consensus that climate change is occurring now and is caused by human activities," the mayor's office  said. "Extreme weather events, which are growing in frequency and severity around the world, demonstrate the consequences of a warming planet and the risks associated with climate denial. In New York City, Hurricane Sandy resulted in the deaths of 44 New Yorkers and caused $19 billion in damages and lost economic activity. Projections show that a Sandy-like storm in the 2050s could cause $90 billion in damage and economic loss, nearly five times Sandy’s impact."

Trump Tower is not alone in facing financial penalties for its alleged greenhouse gas emissions — nor is it even the entity in New York City facing the largest fine. Those distinctions belong to Time Warner Center at 10 Columbus Circle and Mount Sinai Medical Center at One Gustave Levy Place, both of which could face a $5.5 million fine by 2030, according to Business Insider. Google's New York City office will also reportedly be impacted by de Blasio's new policy and could have to pay $4.3 million in fines if it does not decrease its emissions by 2030.

De Blasio's plan is for the city's largest buildings to reduce their greenhouse gas emissions by 40 percent by 2030 — and by at least 80 percent by 2050. The mayor's office claims that buildings in the city are responsible for 70 percent of all emissions.

Salon has reached out to both de Blasio's office and the Trump Organization for comment.