Elizabeth Warren is right: Fox News is a hate machine Democrats should avoid

Bernie Sanders and Amy Klobuchar did Fox News town halls. Warren has refused — and she's right, for many reasons 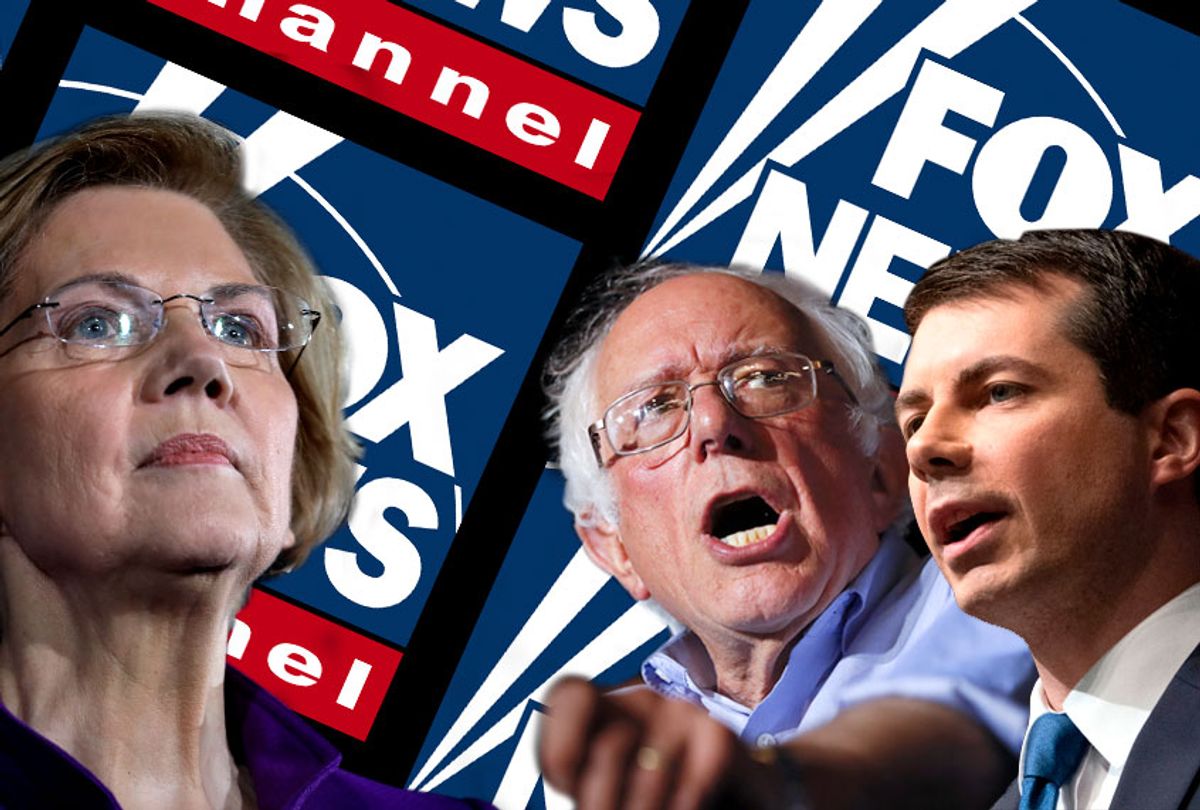 Sen. Elizabeth Warren announced on Tuesday that she would decline a town hall opportunity on Fox News Channel because she does not want to encourage what she called their "hate-for-profit" business model. The Democratic presidential candidate explained that her appearance would only serve to legitimize the cable news giant at a point when advertiser support is declining.

"I’ve done 57 media avails and 131 interviews, taking over 1,100 questions from press just since January," the 2020 presidential candidate wrote in a series of tweets. "Fox News is welcome to come to my events just like any other outlet. But a Fox News town hall adds money to the hate-for-profit machine. To which I say: hard pass."

Warren is clear in her reasoning, and spot on. In recent years, the conservative cable news giant has bled advertisers as it has dealt with self-imposed scandal after scandal. Public pressure on advertisers forced the network to drop marquee names like Bill O'Reilly and Glenn Beck, while sending others, like Laura Ingraham, Tucker Carlson and Judge Jeanine Pirro, into hiatuses to quell the controversy around their most inflammatory rhetoric. Warren’s decision not to prop up the network allows her to take a stand as the Democratic candidate willing to stand up for her own convictions in the heat of a campaign. It also puts her in line with Democratic National Committee chair Tom Perez, who took some heat for his decision not to allow a primary debate on the network.

But Warren’s decision not only the principled choice, it is also the pragmatic one. Publicly pledging to do what Democratic activists have demanded for a decade or more allows Warren to further ingratiate herself to the base and stand out in a crowded field. After all, this is the race for the Democratic nomination first. Fox News viewers aren't necessarily up for grabs quite yet.

As Warren’s recent campaigning in deep red states has shown, her campaign is attempting to bypass Fox News to reach its viewers. Fox News has dominated cable news viewership for years, even beating both MSNBC and CNN combined sometimes. But even the most-watched shows on the channel only pull in about 3 million viewers — or about 1% of the U.S. population.

Still, many criticized Warren’s decision to ignore Fox News. The only way to speak to those in a bubble is to go into the bubble, as Salon’s Matthew Rozsa and others have argued. By this reasoning, tuning out Fox News is a missed opportunity for any candidate trying to cast the widest possible net.

“One of the reasons I came on this show is that I believe candidates for office, whether Democrat or Republican, have to go not just where it’s comfortable, but where it’s uncomfortable,” Sen. Amy Klobuchar of Minnesota, another Democratic presidential candidate, told Fox News anchor Bret Baier in February. Klobuchar has since appeared on a Fox News-hosted town hall.

But if a voter is in the Fox News bubble, one town hall isn't going to burst it. Besides, most of the bubble is during the prime time slots filled with Fox's big stars, and there's no way the channel will air any Democratic candidate’s town hall over “Hannity.”

In any case, any perceived benefit of going on Fox News is completely destroyed when the channel's right-wing commentators are guaranteed to get the last word.

Fox News’ real power as a propaganda faucet is on the internet, where it dominates social media shares on outlets like Facebook. Although Bernie Sanders’ Fox News town hall was widely perceived as successful (he got wild applause for mention of Medicare-for-all!), the Fox News website posted no viral clip of Sanders explaining why health care is a human right. Instead, Sanders' answer to a gotcha question on why he failed to personally cut a check to the IRS if he wants higher taxes was weaponized for wide dissemination. If Warren did a Fox News town hall I'd fully expect about three questions on policy and a dozen or so about her ancestry. Invariably, those would be the clips Fox News pundits would immediately use to attack the candidate.

Leftist views, no matter how "populist" they may be in reality, are only covered on Fox News when the channel's hosts and producers can spin them as embarrassing or toxic. This is especially true when it comes to Warren, a favored target of President Trump's Twitter abuse. The right-wing media machine specializes in vilifying and dismissing women and smarty-pants types, as we saw all too clearly in the 2016 campaign. Warren made the right call.