Salon Quiz: Can you tell the "electable" Democratic candidates apart?

If you're having trouble telling Tim Ryan from Jay Inslee from a Brooks Brothers model, we're here to help, sort of 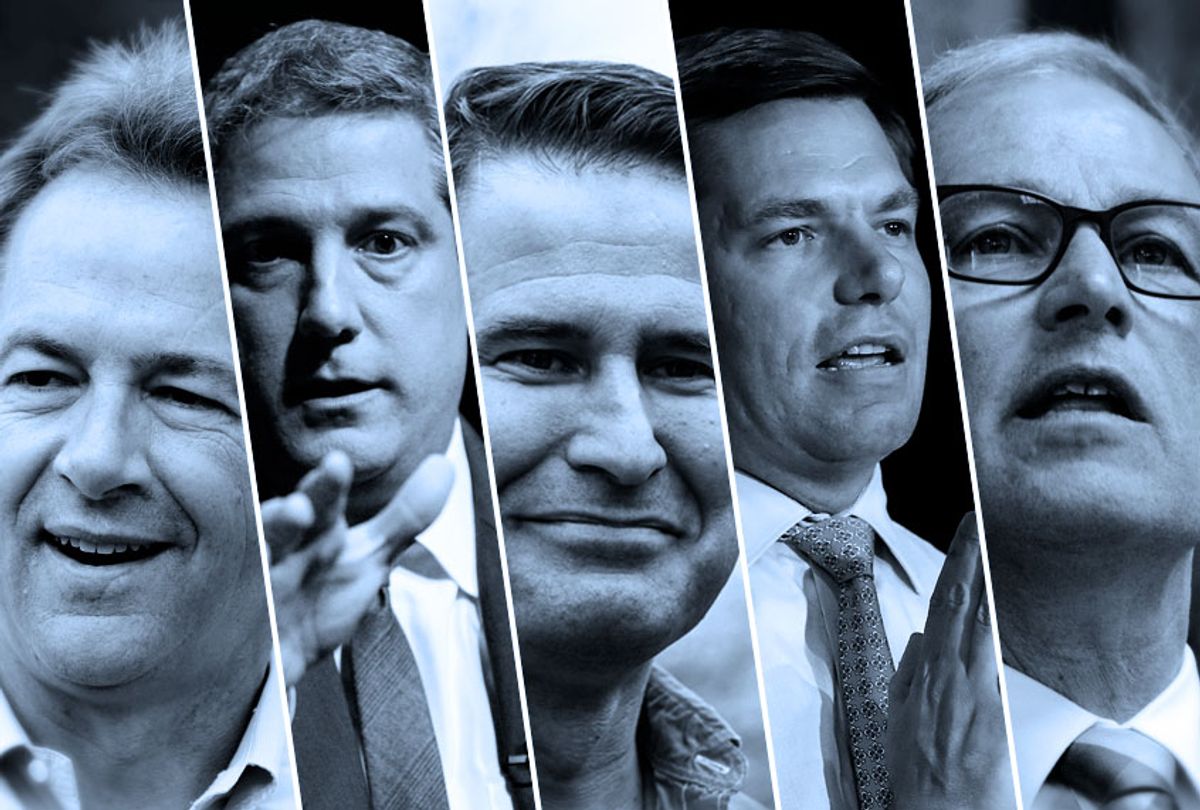 The always-sensible and never-wrong common wisdom of mainstream media punditry has decreed that what Democrats need to beat Donald Trump in 2020 is an "electable" candidate. What does this mean? Unfortunately, it's difficult for anyone to define the nebulous concept of "electability," but one gets the impression it means looking more like former Vice President Joe Biden, who washed out early in two previous Democratic primary campaigns before, and less like Barack Obama or Hillary Clinton, both of whom got millions more votes than the Republicans they ran against.

"Electable" appears to mean someone who, you know, would be equally comfortable in both Brooks Brothers and REI. It's someone whose wife — or husband, let's not be homophobic — probably buys most of his clothes for him. He's fond of talking about how he wants his daughter to grow up to be whatever she can be, and makes sure to thank his wife for handling all those domestic chores he just doesn't have time for. If he weren't running for office, you can imagine him be starting his own microbrewery or podcast (if he doesn't already have one).

Thanks to the siren call of "electability," the Democratic primary field is thicker with white guys than a Radiohead concert. The latest to announce is New York City Mayor Bill de Blasio, bringing the number of these candidates — let's call them the "electables" — up to 13 out of 23.

With a field that crowded, it's understandable that voters might be struggling to tell the Seth Moultons from the Eric Swalwells. It's at the point where the candidates may be forced to wear numbered jerseys — which do not have sleeves that can be rolled up in a workmanlike-like manner — to distinguish them during the debates.

So Salon is here to help, in a manner of speaking, with a quiz that can test how much you know about the electables.

1. Of this list of potential candidates, which has not actually announced a run for president (yet)?

a) Scotty McCreery b) Russell Dickerson c) Chase Rice d) Chris Stapleton e) Come on, you're just trolling — those are names you pulled of the Billboard Country Hot 100.

2. Without going over, how many of the electables could you plausibly imagine having Boz Scaggs and/or Daryl Hall play their inaugural party? Answer here: _______

3. What percentage of the electables can you say for certain isn't that guy your mom or sister brought as a date to your wedding, who was nice enough but whose name you are sorry to say you can't remember?

4. Policy time! Which candidate is running on a platform of cleaning up D.C., restoring our nation to its original promise and being a guy you have heard Midwestern guys who drive trucks might consider voting for?

a) Pete Campbell, as portrayed by Vincent Kartheiser b) Your neighbor who seems nice and keeps his lawn maintained really nicely c) A group of six candidates who have combined into a pleated-pants Megazord to save space on the debate stage d) That good-looking guy from the Marvel movies franchise, you know who I mean, the one the girls like.

5. Without peeking, try to guess correctly which candidate will deny on the campaign trail that House Speaker Nancy Pelosi speaks for him.

7. On a scale of 1-10, predict how likely it is that the  13 electables will face a minor campaign scandal when it is discovered that while they are frequently photographed in a Dodge Ram or Chevy Silverado pickup, the family car back home is, in fact, a Prius.

8. At some point in the campaign, candidates will be asked to supply a list of their current favorite musical artists, in order to humanize them and give the newspapers some light, non-political material. (Pro tip: This is known in the trade as "color," which is kind of a funny word to apply to these guys.) Such a list will be written by communications staff eager to make the candidate seem well-rounded but not too worldly, hip but not edgy, and open to diversity without being too woke.

With that in mind, which musical performer will crop up the most on "electable" candidate lists?

9. Right now, former Vice President Joe Biden owns the "electable" lane, pulling out well ahead of the other electables, as well as candidates like Sen. Elizabeth Warren and Sen. Kamala Harris, who continue to be "unelectable" despite pulling huge crowds at rallies.

Clearly, Biden is the threat that the electables need to take out if they have any chance. So what will be the strategy?

a) Working together, create a flying-V formation on the debate stage to obscure the audience view of Biden in hopes they'll forget he was there b) Jostle to stand next to Biden on stage, puffing out their chests and standing tall, hoping to look more electable by comparison c) Talk about football a lot, and also beer, and if that's not working, talk about that time they had to change a tire by hand when it was raining "like a son of a gun" d) None of the above, because, at the end of the day, they're mostly hoping Biden will remember their names and pick them for the VP slot.

10. Running for president is hard work, but even the hardest working man needs to take some downtime to unwind and relax. See if you can match up the 13 electables to the way they spend their increasingly precious free time on the campaign trail.

We can only hope this quiz helps clear things up for those going into the Democratic primary campaign faced with the impossible problem of deciding which of these eminently electable candidate is most electable of all. Just remember that it's outside the spirit of the quiz — and, apparently, the entire campaign — to ask questions about whether the media metrics for what constitutes "electability" might be off. Remember the last time the Democrats focused on "electability," when they picked John Kerry as the perfect guy to beat George W. Bush in 2004. That worked out great! So there's no reason to think it won't work now.