Abortion rights are under serious attack: Here's how men can join the fight

Men don't have to join a #SexStrike or become the center of attention. They just need to care about women as people 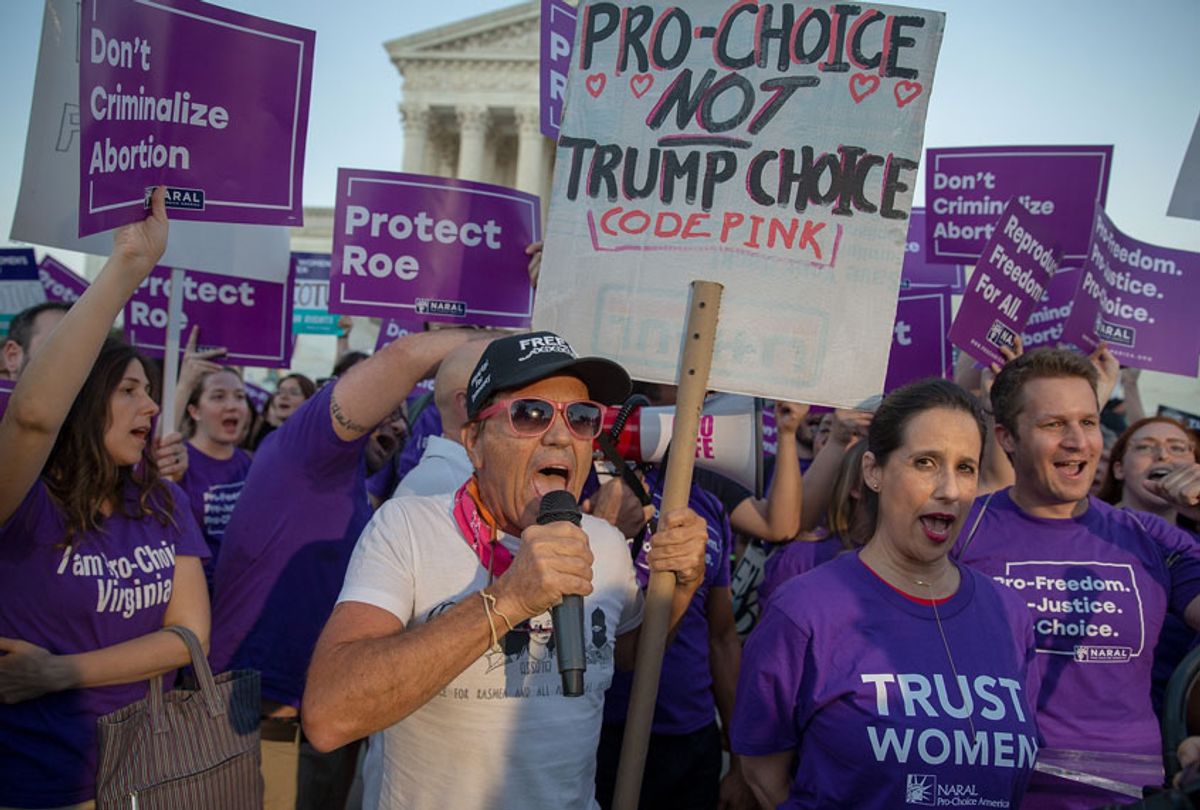 Pro-choice and anti-abortion protesters demonstrate in front of the U.S. Supreme Court on July 9, 2018 in Washington, DC. (Getty/Tasos Katopodis)
--

In the face of the red-state race to see who can ban abortion the fastest and the most — Missouri just joined Alabama, Georgia, Ohio, Kentucky and Mississippi in stripping women of basic bodily autonomy rights — the debate over abortion is heating up. Women are speaking out about their abortions, hoping to humanize the procedure in face of anti-choice propaganda that paints abortion patients as either sluts or imbeciles. Feminist activists and female celebrities are raising the alarm, decrying the nearly all-male group of legislators who have decided to treat women and doctors who are involved in a common, safe and necessary procedure as criminals.

But those Republican legislators only represent a small portion of men. According to PerryUndem, nearly as many men as women — 71% of men vs. 75% of women — support upholding Roe vs. Wade. And 59% of men, compared to 66% of women, want state legislators to protect or expand abortion access.

So there's a real question in all this: What about men? Men still control the majority of political power in this country. There is good reason for feminists to believe that if ostensibly pro-choice men did more to fight for reproductive rights, they would have the power that women frankly lack to stop this minority of men from imposing their will on the rest of us.

Besides, since cisgender heterosexual men are the proximate cause of nearly all abortions, it follows that they have a moral obligation to do more to help the women in their lives who already must deal with the physical burdens of managing sexual reproduction, even without all this political oppression.

But it turns out that it's tricky, trying to figure out how to deal with the question of men and reproductive rights. Feminist activist and actress Alyssa Milano discovered this when she called for a "sex strike," calling it "a way to target straight, cisgender men so they may feel the physical consequences of our reproductive rights being systematically eliminated."

This suggestion was immediately met with outrage from other feminists — and glee from conservatives — on the grounds that Milano was doing what anti-choicers are already doing, which is trying to bully women into sexual abstinence. Milano's point, of course, was that men need to do more and care more. That's important. But her "solution" just makes things worse, not better.

To create a better avenue of engagement for men on the reproductive rights issue, it helps to understand how anti-choice activists — those who would like to see abortion banned, or at least virtually eliminated — understand the role of men.

Unlike pro-choicers, antis have spent a lot of time thinking about men and abortion, which is no surprise. Cisgender straight men are the only people who are really people to them, and are therefore central to their ideology.

Having spent over a decade immersing myself in anti-choice propaganda for reporting purposes, I have a pretty good handle on how they think about men and sexuality. The widely held view is that men can't and won't respect women as equals, much less love them in that context. Sex is framed as a necessary form of bait to lure men into marriage, which they are otherwise eager to avoid. Contraception and abortion, in this view, degrade the process by which women induce men to set aside their natural disinclination to make a lifelong commitment to a member of the inferior sex, by making it too easy for men to get the only thing they really want from women.

That's oversimplifying it a bit, to be sure. There's also a lot of chivalric idealization in anti-choice circles, celebrating men who "rescue" women from abortion clinics, overcoming their natural caddishness in order to make an honest woman of their sex partner, whether she likes it or not. But basically, there's a sense that women are foolishly letting men get the milk without buying the cow, and that some degree of compulsion is required to restore the monogamous social order anti-choicers desire.

Understanding the blunt sexism of conservative views on gender relations also makes why some well-meaning attempts by feminists to engage men  on the reproductive rights issue have the potential to backfire.

The proposed "sex strike," for instance, only reinforced what conservatives already believe about men: They don't care about women as people, and are only interested in them as an avenue for sexual release. It also reinforced the conservative view that sex isn't something that women ever really enjoy for its own sake — at least not the "good" kind of women — but is instead a commodity they use to manipulate men. Unsurprisingly, conservatives rushed forward to tell women that instead of sex-striking for abortion rights, they needed to sex-strike in order to trap men into marriage.

That's why I also blanched at feminist video host Liz Plank suggesting that men join the women who are speaking out about their abortions:

Plank's suggestion isn't as wrong-headed as Milano's "sex strike," but still, I blanched. The anti-choice line about abortion is frequently that it's something caddish men use on women who are too dimwitted to leverage that unintended pregnancy into a marriage proposal. (The idea that a woman might not want to marry a man who needs his arm twisted is rarely considered in their view.)

Sure enough, below Plank's tweet came replies claiming that a "real man would ... take care of his child and the mother" and that any "man who would pressure his partner into an abortion to advance his own career is trash." Other respondents claimed that nobody "benefits more from abortion than dirtbag men" and that the whole process is "so degrading to women".

If this view were limited to anti-choicers, that would be no big deal. Unfortunately a lot of politically moderate Americans also hold some version of the idea that marriage and children are things that women always long for and toward which men must be dragged along reluctantly. While the truth is that most abortions are mutually beneficial decisions, the idea that women are being exploited or manipulated by men in these situations is still compelling to many people.

Amid all these pitfalls, it's no wonder that so many men stay far away from the issue, even if they support abortion rights. But there is a way for men to speak out and stay engaged: By putting women first.

That doesn't come easily to a lot of men, who are used to being the center of attention in political discourse. Like many things, it starts to feel more natural with practice. They don't need to be pressured into endorsing a sex strike. Instead, they need to be seen voluntarily and selflessly standing up. Not for themselves, and not because they're getting laid. But because they believe women have value outside of that.

It means a lot to see men's faces at pro-choice rallies, men sharing pro-choice memes on social media, men wearing pro-choice T-shirts and speaking out in other ways. The sad fact of the matter is that men have more social power than women, so when men speak out, it counts for more. All they need to do in order to be effective is to use their words to say that women matter, not just as wives or girlfriends or mothers, but as people.