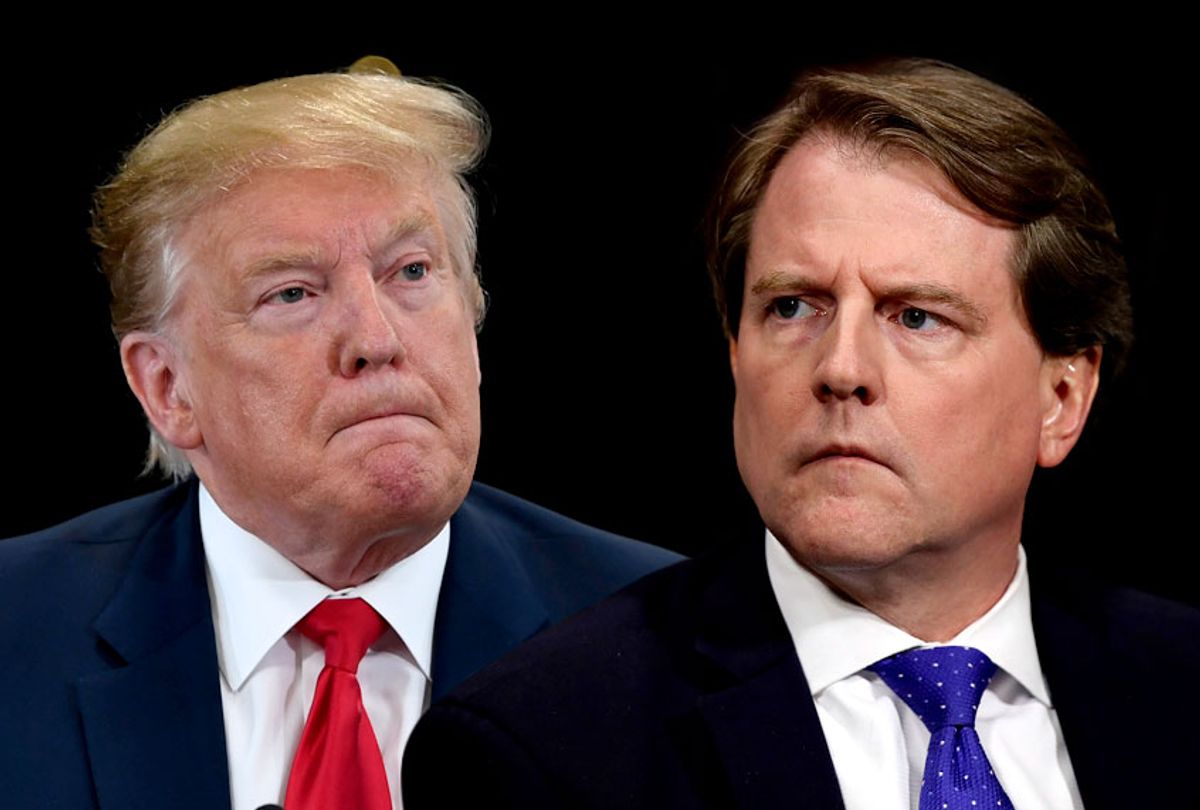 Don McGahn defied a congressional subpoena on Tuesday after President Trump ordered his former White House counsel not to answer questions intended to probe whether the embattled commander-in-chief obstructed justice in the course of special counsel Robert Mueller's investigation.

Current White House counsel Pat Cipollone sent a letter Monday to House Judiciary Committee chairman Jerrold Nadler, D-N.Y., saying that the Justice Department "has advised me that Mr. McGahn is absolutely immune from compelled congressional testimony with respect to matters occurring during his service as a senior adviser to the president." He added, "The president has directed Mr. McGahn not to appear at the Committee's scheduled hearing."

McGahn's lawyer also sent a letter confirming the White House's orders, arguing that "Mr. McGahn . . . must honor his ethical and legal obligations as a former senior lawyer and senior adviser to the president. In short, it is our view that the committee's dispute is not with Mr. McGahn but with the White House . . . Mr. McGahn remains obligated to maintain the status quo and respect the president's instruction."

"Their pattern is to tell the committee at the very end that someone's not coming in — the night before," Nadler explained. "I mean, he's been on schedule for a month. And all of a sudden, they tell us the night before. But this is part of the pattern of the president, and Rudy Giuliani and the White House generally intimidating McGahn from testifying — acting lawlessly to prevent him from testifying about the obstructions of justice, which he testified to —  the president's obstructions of justice, which he testified to by Mueller."

He added, "So you're dealing with a lawless president, who is willing to go to any lengths to prevent testimony that might implicate him — that does implicate him."

When Nadler said the House Judiciary Committee would move to enforce the subpoenas against McGahn and Attorney General William Barr in court, Cuomo pointed out that it could take "forever" to complete that process. In response, Nadler pointed out how, earlier that day, a federal court had rejected an argument made by the Trump administration, which was similar in scope to the one being used to block both McGahn and Barr from testifying.

Nadler reiterated his disgust with McGahn during Tuesday's House Judiciary Committee hearing, one in which an empty chair where McGahn was supposed to sit was left vacant for cameras to see, according to NBC News.

"This conduct is not remotely acceptable," Nadler said during his remarks. "Mr. McGahn did not appear today, because the president prevented it — just as the president has said that he would 'fight all subpoenas' issued by Congress as part of his broader efforts to cover up his misconduct."

He added, "Our subpoenas are not optional. Mr. McGahn has a legal obligation to be here for this scheduled appearance. If he does not immediately correct his mistake, this committee will have no choice but to enforce the subpoena against him."