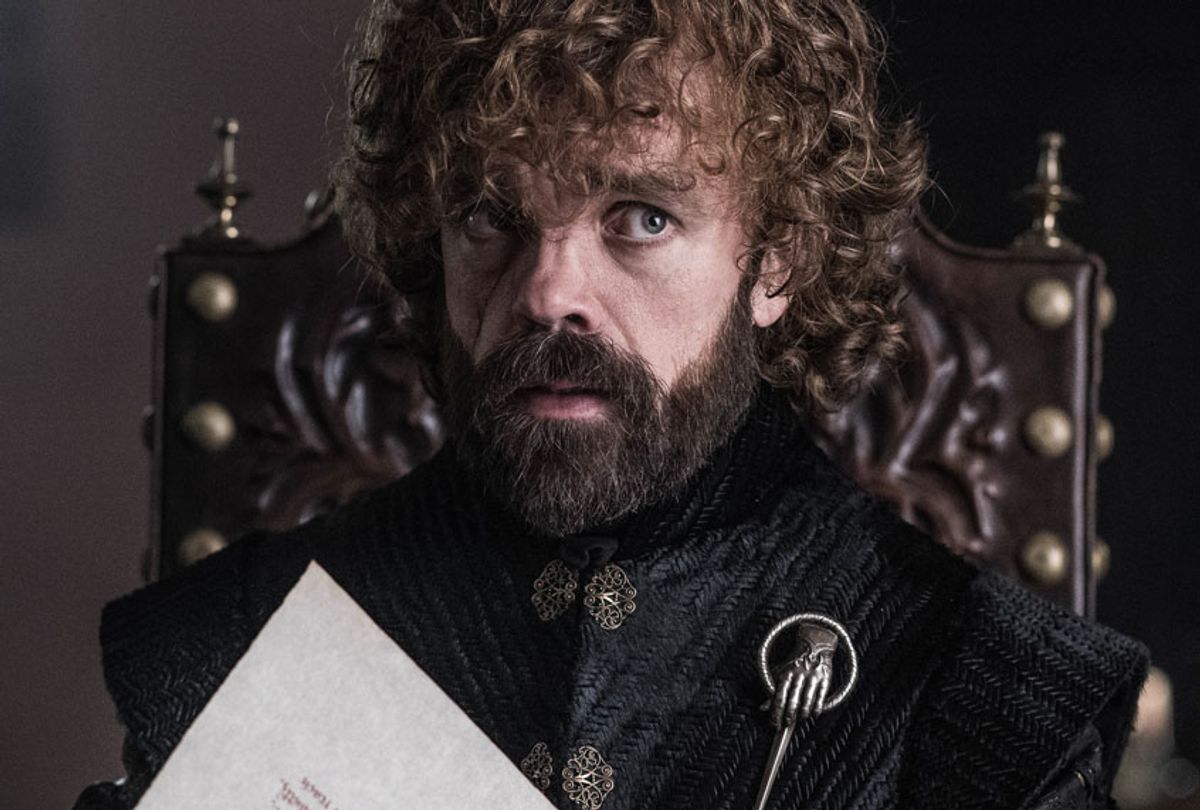 Spoilers for the series finale of "Game of Thrones" follow.

When reflecting back on the TV version of "Game of Thrones" fan favorite Tyrion Lannister (Peter Dinklage), it must be said: There is something courageous about a television series that is brave enough to reimagine Richard III as a hero.

I'm referring to the character from William Shakespeare's classic play, of course, not the real-life King of England who served from 1483 to 1485. Indeed, the factual human being has been so obscured by the Bard's fiction that popular conceptions of him usually hew more closely to the myth than the person. Despite being depicted in the play as a deformed hunchback with a withered hand, an archaeological excavation of his remains several years ago revealed nothing more than a mild case of scoliosis. His right shoulder would have been slightly higher than the left one, but hardly enough to count as a hideous deformity.

Of course, as my colleague Amanda Marcotte brilliantly observed, the medieval literature from which "Game of Thrones" drew its inspiration was notoriously bigoted against physical abnormalities. If one was disabled or disfigured, the assumption went that you were weak or evil. Part of the reason the series finale to "Game of Thrones" was so subversive is that it upended this trope by having the seven (er, six) kingdoms wind up being ruled by a paraplegic young adult, Bran Stark (Isaac Hempstead-Wright) and, by proxy as Hand of the King, by Tyrion himself.

Lest you think I'm reading too much into this: George R. R. Martin himself has admitted that he is a big fan of the play "Richard III." It is exceptionally unlikely that a man who puts as much time into crafting his stories as Martin would utilize the "deformed royalty" trope without being aware of its connection to one of English literature's most famous royal characters.

Yet part of what makes Tyrion Lannister so fascinating is that his story is a Bizzaro World version of Richard III. His deformity, dwarfism, actually signifies superior virtue in the "Game of Thrones" universe rather than moral shortcomings — not in spite of the rampant medieval prejudices of those around him, as his nickname "the Imp" confirms, but because his oppression helps him empathize with the less fortunate. Similarly, instead of lusting for power like Richard III, he only comes to it reluctantly, and when it is given to him he uses it compassionately (one hesitates to say wisely, given his spotty track record as Daenerys Targaryen's Hand).

Finally, in his closing scene of the series, Tyrion finds out that he isn't doomed to have his name dragged through the mud by future generations, despite the decisions that helped lead to the burning of King's Landing. The fate of his legacy, though bittersweet, is still a marked improvement.

As Tyrion looks through a work of history depicting the wars since the death of King Robert Baratheon, Tyrion speculates, "I suppose I come in for some heavy criticism."

"Oh, he's kind to me? I wouldn't have guessed," Tyrion casually responds, not reading between the lines of Tarly's discomfort. After finally picking up on Sam's painful silence, Tyrion finally insists on being told what is said about him.

"I don't believe you're mentioned," Sam at last admits, prompting Tyrion to give a quick pained look before hurriedly closing the book and pretending the slight to his memory doesn't bother him.

This is a cruel blow to the proud royal, of course, but it is more fair than Richard III's fate. The real-life Richard III is believed to have been a better-than-average ruler; despite Shakespeare's calumnies against him, modern historians give King Richard III credit for creating a court where the poor could be heard out, prohibiting restrictions on the sales of books, establishing a fairer bail system and generally having a reform-minded disposition. Yet Shakespeare, for his own personal reasons, needed to depict him as an immoral and Machiavellian schemer.

"Shakespeare, like his contemporaries in Tudor England, was bound to his queen and wary of censors," Kyle Kallgren, a YouTuber and self-identified Bardolator (whose informative and entertaining video series on Shakespeare's modern adaptations I cannot recommend enough), told Salon by email. "If he was going to write a piece about a Yorkist king, who would die in battle against Elizabeth I’s grandfather, it would benefit him politically to display the Tudor claim to the throne as flatteringly as possible. Hence Shakespeare plays up Richard’s war crimes, his hypocrisy in regards to religion, his constant backstabbing and emotional manipulation — all this is meant to turn the audience against York and legitimize Henry Tudor’s uprising against him, which in turn legitimizes the Tudor claim."

Kallgren also noted the parallels between Tyrion and the historical Richard III, though not so much the literary one.

"I honestly don’t see many parallels between the literary Richard and Tyrion, save for the fact that their physical disabilities are often used to marginalize them," Kallgren explained. "Tyrion’s no saint — he did kill his former lover and his father, after all — but he’s never framed as a villain to the audience. Tyrion is a wisecracking hero for most of the show. However, he’s framed (literally) in the world of his story as a villain. He’s wrongly blamed for the death of Joffrey and put on trial, and in Essos we see his deeds dramatized with Tyrion in the role of the villain."

One could argue that it says something positive about our era that we empathize with rather than deplore our versions of Richard III. In addition to showing how our views toward physical abnormality have become more humane, it also reveals that we perceive the capacity toward empathy as the true sign of a worthy leader. Shakespeare's Richard III may have been marked as evil by his twisted body, but his downfall was his inability to care about anyone other than himself in his climb to power. In "Game of Thrones," by contrast, Tyrion's stunted body makes him care all the more about "cripples and bastards and broken things," and that's a very good thing in a world, much like our own, where those are the people who most desperately need help from the powerful.