Kellyanne Conway accuses Nancy Pelosi of classism: "She treats everybody like they’re her staff"

Conway claims Pelosi treated her like a "maid," provoking a confrontation in the Cabinet Room of the White House 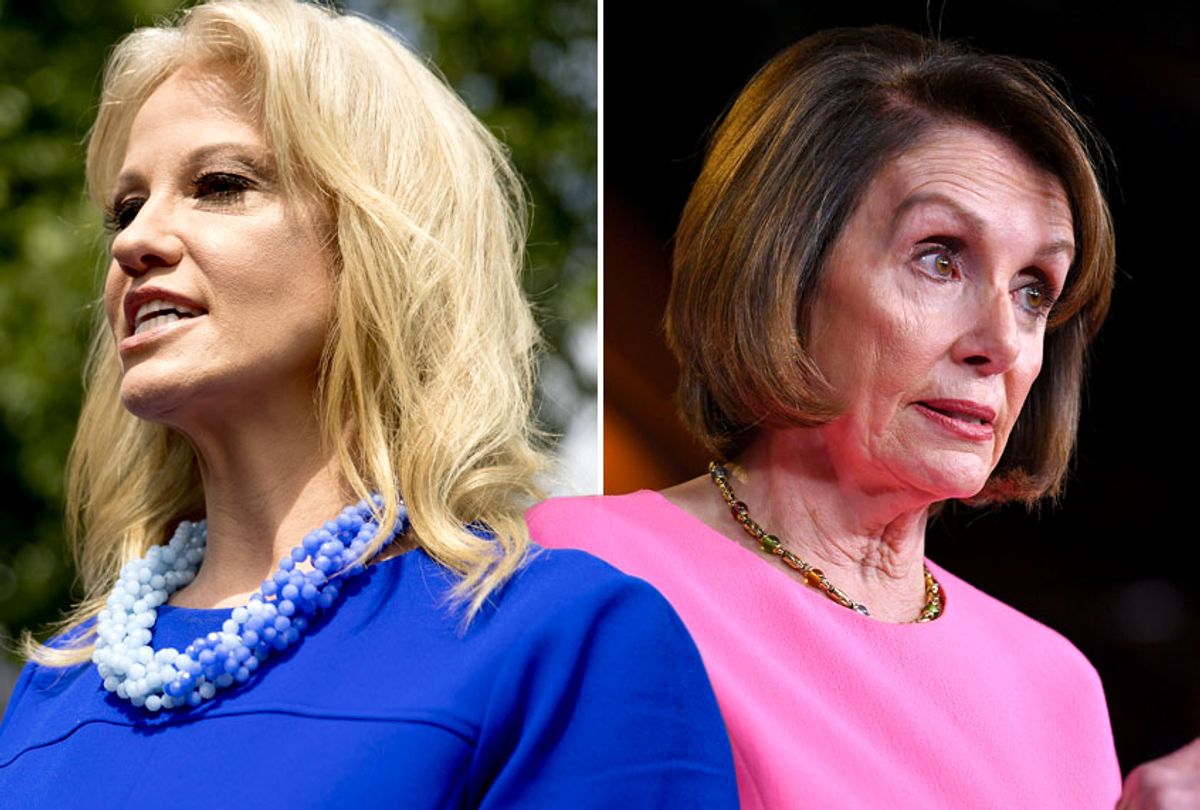 White House counselor Kellyanne Conway suggested that Speaker of the House Nancy Pelosi behaved in a classist and sexist fashion when the pair interacted after a brief meeting in which President Donald Trump stormed out.

Conway claimed that she and Pelosi began to exchange harsh words after Trump abruptly ended the meeting between himself, Pelosi and Senate Minority Leader Chuck Schumer on the grounds that they could not productively discuss policy as long as they continued investigating the White House.

"When she was finished, I said respectfully, ‘Madam Speaker, would you like to address some of the specifics the president talked about?'" Conway recalled to Fox News. The White House counselor claimed that Pelosi replied by saying, "I don’t. I talk to the president. I don't talk to staff."

Conway said she perceived the interaction as being rooted in Pelosi's wealth, and perhaps to an extent, an insincerity in her role as an advocate for women.

"Because let's face it, she is the sixth-most rich member of Congress," Conway claimed. "She treats everybody like they’re her staff. She treats me like I'm either her maid, or her driver, or her pilot or her makeup artist — and I'm not."

She added, "I said to her, ‘How very pro-woman of you.’ Per usual, because she is not very pro-woman. She is pro some women — a few women."

Conway also implied that the confrontation between Trump, Pelosi and Schumer was a publicity stunt.

"She was the one who came to the mics and said that the president was engaged in a 'cover-up,' which is nonsense," Conway said. "All she had to do was either move her meeting to later in the afternoon with her caucus — where she's under enormous pressure to get on with impeaching the president, which she doesn't want to do right now. Or she could have said, 'I won't talk to you right now. We're on our way to the White House to work on infrastructure. Let's meet at two or three, and I'll give you the rundown of the whole day.' But no, they can't resist going out and giving a live running commentary of what her more outrageous, liberal hellbent on getting this president out of the White House members are pressuring her to do."

Pelosi has refused to comment on her exchange with Conway, although earlier one of her spokespeople said she had told the White House counselor, "I’m responding to the president, not staff." Immediately after the tense meeting with Trump, Pelosi told reporters, "He just took a pass, and it just makes me wonder why he did that. I pray for the president of the United States, and I pray for the United States of America."

Schumer expressed similar thoughts, telling reporters that "now that he was forced to actually say how he would pay for it, he had to run away. We are interested in doing infrastructure — it's clear the president isn't."