Trump and Ben Carson: King and court jester of the kakistocracy

Trump's clownish HUD secretary is a perfect emblem of his incompetent misrule, but the disorder is much larger 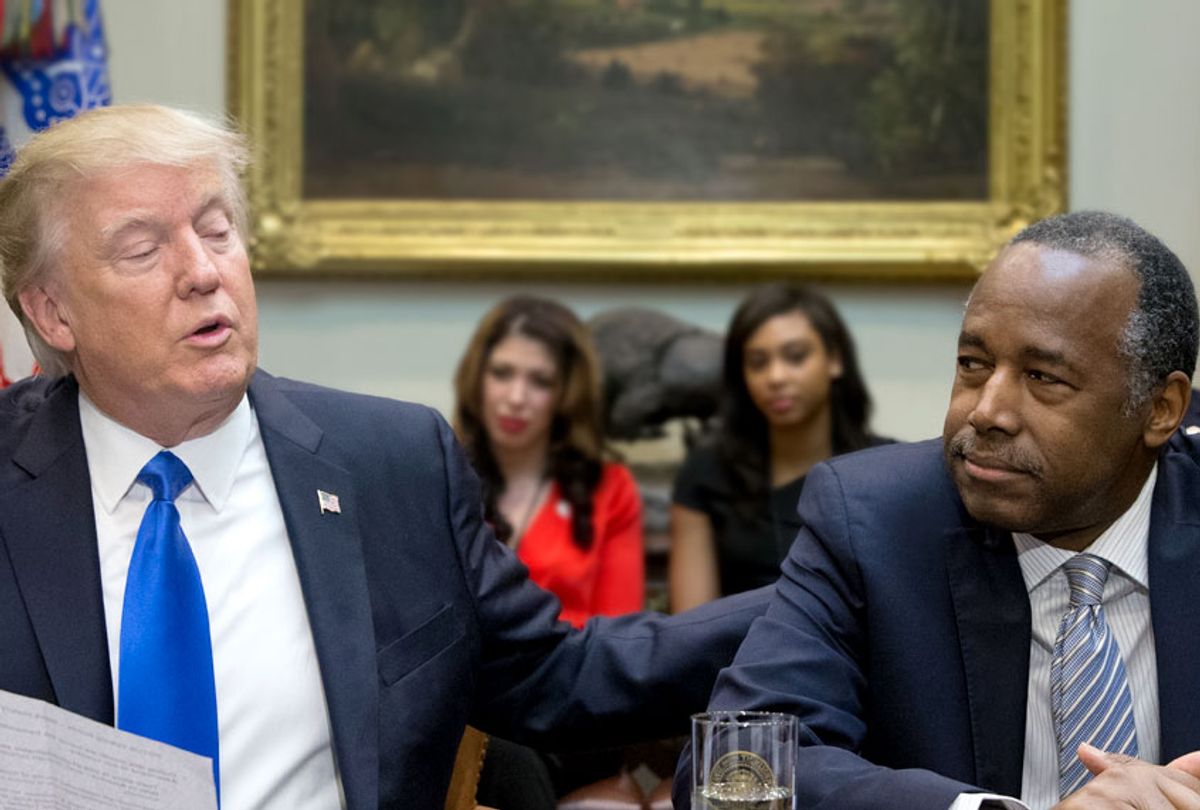 Donald Trump is the leader of the American kakistocracy — a term that means rule by the stupid, ignorant, lazy and profoundly incompetent. Sophia A. McClennen predicted this accurately in a Salon essay published a full month before Trump was inaugurated. As business professor André Spicer described it in a Guardian op-ed, a kakistocracy is "the wicked disorder that can result when expertise and ethical judgment are aggressively and systematically pushed aside."

On Wednesday, in keeping with his ceremonial duties as king of the kakistocrats, Donald Trump stood at a lectern in the Rose Garden after reportedly throwing a temper tantrum during a (very brief) meeting with House Speaker Nancy Pelosi and Senate Minority Leader Chuck Schumer. Trump proclaimed, "I don't do cover-ups" and announced that there would no trillion-dollar infrastructure bill as long as Democrats in Congress dared to investigate him.

Along with the seal of the President of the United States, Trump's lectern was festooned with a placard that read "no collusion" and "no obstruction," and included other supposedly favorable details about Robert Mueller's investigation, at least as massaged and misrepresented by Attorney General William Barr.

The net effect of Trump's press conference was akin to a scene from Mike Judge's satire "Idiocracy" but with one key difference: Judge's fictional President Dwayne Elizondo Mountain Dew Herbert Camacho is more intelligent than Donald Trump, possesses more charisma and after his own fashion actually cares about the welfare of the United States.

Given his horrible public and private behavior and his gross defects in character and morals, Donald Trump's "no collusion, no obstruction" is the political equivalent of an attorney asking a defendant in court, "When did you stop beating your wife?" That the president of the United States must repeatedly deny engaging in criminal behavior is a de facto confession to virtually everything Trump has been accused of doing.

And of course Trump chose to lie, as usual. During his Wednesday press conference Trump chose a lie of omission: the other part of the ABC News infographic which he and his minions chose to discard detailed all of Trump's allies who have been charged, convicted or imprisoned because of Mueller's investigation.

A king has a court. This is especially true in a kakistocracy. Donald Trump's favorite jester of the moment is Ben Carson, the famed brain surgeon now turned secretary of Housing and Urban Development.

On Tuesday, Carson testified before Congress, displaying no evidence of the supposed intelligence that enabled him to become one of the country's most celebrated pediatric brain surgeons.

During his testimony, Carson could not answer basic questions about his job and what it entails. He appeared to lack even the most elemental expertise necessary to serve in a cabinet-level position — for any agency.

In an effort to diffuse the laughter and dodge the barbs thrown at him for his amazing display of incompetence, Carson then tweeted a photo of himself smiling while holding a bag of Oreos.

A joke about a black conservative who works for a racist president proudly holding up a bag of Oreos writes itself. Unfortunately the joke is so obvious that it is rendered crude and dull, and would likely end up on the cutting room floor at "Saturday Night Live" or "The Jeffersons," or might have made the cut as a skit featuring Artie Lange's "That's My White Mama" character on "Mad TV."

Ben Carson is not the only jester in the court of the king of the kakistocracy. Donald Trump has filled key governmental positions, from the cabinet level down, with individuals who are manifestly unqualified for their jobs. This takes several forms. In some cases these people have no training for the jobs they have been assigned. Federal judges with lifetime appointments, for example, who possess little if any knowledge of the law and the Constitution. Their qualifications? Enforcing the will of the extreme right by overturning women's reproductive rights, smothering the civil and human rights of nonwhites, LGBTQ people and other groups, killing unions, overturning labor and environmental laws, and making it harder for Democrats to vote as a way of ensuring the Republican Party's continued rule.

There are other members of Trump's kakistocracy who may have the intelligence and ability to run portions of the government effectively but have no desire to do so. Why? Destroying American government and democracy is their primary goal. In the service of gangster capitalism, the government and the very idea of the commons must — as anti-tax crusader Grover Norquist once put it — be shrunk down to the point it can be drowned in the bathtub. As Norm Ornstein said of the Trump regime in a 2017 essay in the Atlantic, "Awful as the grifterish mentality and behavior may be, worse is the other part of kakistocracy — inept, corrupt, and disruptive governance."

American kakistocracy as led and enforced by Donald Trump and his agents is not a simple matter of incompetent and broken governance. A kakistocracy has a broad impact on society. Writing at openDemocracy, Amra Ali explains it this way:

Therefore, kakistocracy will not only capture rule by the “stupid” and the “worst,” but how they push human relationships, that form the controlling governmental machinery, into a degenerative state.

The American kakistocracy is not an indictment of Donald Trump and other members of the country's elite alone. Trump's movement would have little power or legitimacy if there were not many millions of Americans who share his values. (Most polls continue to report that nearly 90 percent of Republicans support him.)

Nearly two and a half years into Trump's regime, it is obvious that his voters and other rank-and-file supporters love him. They love him for his ignorance, boorishness, crudeness, anti-rationality, irrationality, the fact that he proudly does not read and other willful deficits of the intellect and mind. In their eyes, these are not disqualifications but positive attributes that elevate him above all other leaders.

Philosopher Henry A. Giroux summed much of this up in devastating detail in a recent essay here at Salon:

Thinking is now viewed as an act of stupidity, and ignorance a virtue. All traces of critical thought appear only at the margins of the culture, as ignorance becomes the primary organizing principle of American society. For instance, two-thirds of the American public believe that creationism should be taught in schools and most of the Republican Party in Congress do not believe that climate change is caused by human activity, making the U.S. the laughingstock of the world. Politicians endlessly lie, knowing that the public is addicted to extreme violence and shock, which allow them to drown in overstimulation and live in an ever-accelerating overflow of information and images.

News has become entertainment and echoes reality rather than interrogating it. ...

Unsurprisingly, education in the larger culture has become a disimagination machine, a tool for legitimating ignorance that now plays a central role in the formation of an authoritarian politics that has gutted the ideologies, policies and institutions that are crucial to a substantive and thriving democracy.

I am not talking about the kind of anti-intellectualism that has a long history in the United States. I am pointing to a more lethal form of ignorance fueled by a manufactured type of illiteracy that is often ignored. What I am referring to is a mode of illiteracy that is both a scourge and a political tool power designed primarily to make war on language, meaning, thinking, and the capacity for critical thought.

In tragic fashion, Donald Trump is proof that the myth of American meritocracy may, if turned upside down, actually be true: Anyone can become president, if he is a rich white man craven and stupid enough to appeal to the worst instincts of Americans and rule over a kakistocracy.