Elaine Chao did not divest from stock in construction-materials company despite her promise: report

"Upon confirmation, I will resign from my position with Vulcan Materials," Chao previously told an ethics official 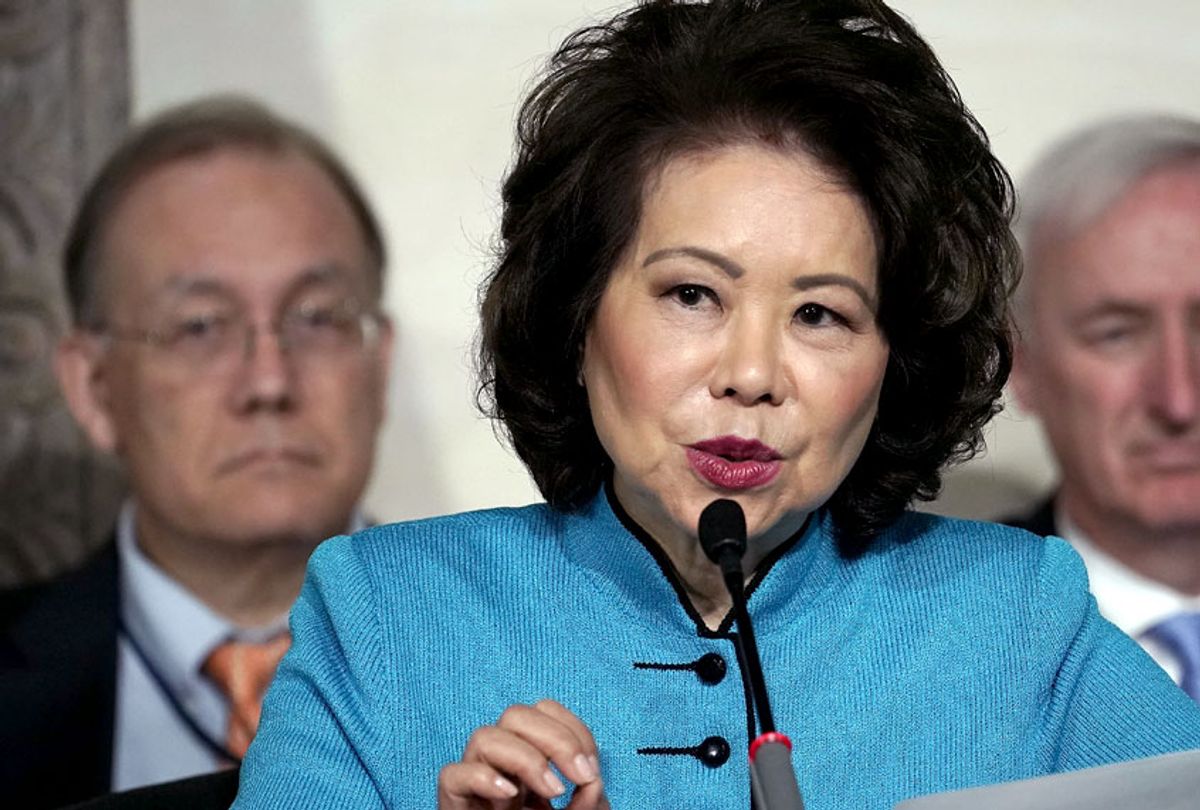 Secretary of Transportation Elaine Chao never divested herself from stock in a construction-materials company despite promising an ethics official she would do so, a new report reveals.

"Upon confirmation, I will resign from my position with Vulcan Materials," Chao wrote in a letter to Judith S. Kaleta, the Transportation Department's designated agency ethics official, prior to being confirmed as secretary. "I hold vested deferred stock units with Vulcan Materials. I do not hold any unvested deferred stock units, stock options, restricted stock or common stock."

Despite this promise, Chao has retained shares in Vulcan Materials, which specializes in creating the crushed stone, sand and gravel mix used in road-paving and building, according to the Wall Street Journal. The outlet also noted shares of Vulcan Materials have increased in value by 13 percent since April 2018, when Chao said she would cash out of the stock, earning her more than $40,000 in the process.

The company claims she was given shares as deferred compensation for her roughly two-year stint on the corporation's board of directors. An ethics official in the Department of Transportation (DOT) claims Chao's shares in Vulcan do not pose a conflict of interest, because she has recused herself from matters involving the company. A DOT spokesman also defended Chao by claiming the ethics agreement was flawed, because Vulcan's corporate policy is to compensate directors' deferred share units in shares of the corporation's stock.

Walter Shaub, who headed the Office of Government Ethics until July 2017, told the Journal that "if you look at her ethics agreement, it provides for a complete disentanglement of her interest from Vulcan Materials, and that’s what was represented to the Senate. For the head of the DOT to have a financial interest in an asphalt company — that is not sending a message to employees of DOT that she is making ethics a priority."

Chao seemed to acknowledge the importance of not allowing her business connections to influence her official conduct in her original ethics letter, writing that "until I receive the cash payment of my vested deferred stock units, I will not participate personally and substantially in any particular matter that to my knowledge has a direct and predictable effect on the financial interests of Vulcan Materials, unless I first obtain a written waiver, pursuant to 18 U.S.C. § 208(b)(1)."

Prior to serving as Trump's transportation secretary, Chao was perhaps best known for her stint as former President George W. Bush's labor secretary. The wife of Senate Majority Leader Mitch McConnell, Chao also holds the distinction of being both the first Chinese American and the first Asian American woman to hold a position in a presidential Cabinet. The latter has caused her to face racist attacks from right-wing Republicans like Don Blankenship, who during his 2018 Senate campaign said that Chao was the daughter of a "wealthy Chinaperson" and falsely claimed that "there’s a lot of connections to some of the brass, if you will, in China." In an apparent reference to McConnell, Blankenship also claimed, "I read in books that people think he's soft on China."