The court did not take up the part of the law which bans abortions because of fetal disability, race or gender 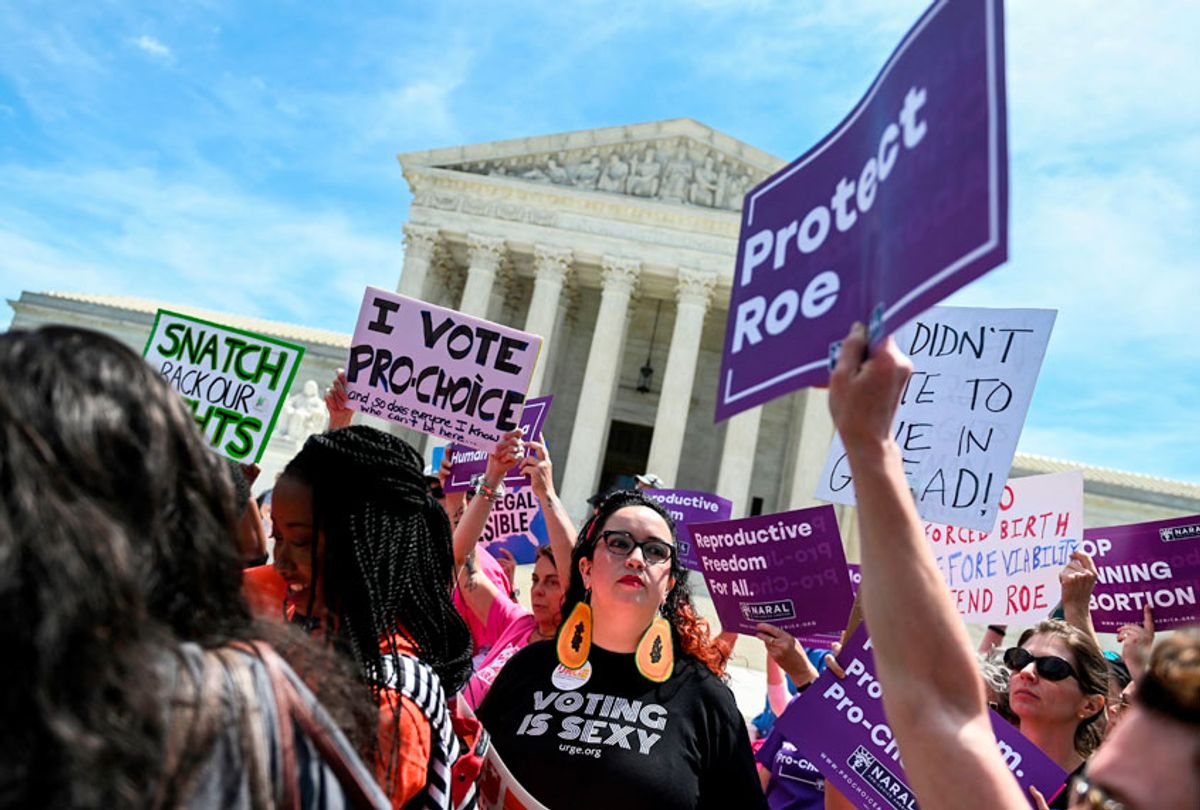 Abortion rights activists rally in front of the US Supreme Court in Washington, DC, on May 21, 2019. (Getty/Andrew Caballero-Reynolds)
--

The Supreme Court on Tuesday left in place a provision of an Indiana abortion law requiring abortion providers to dispose of fetal remains in the same way as other human remains — in other words, burial and cremation.

The nation's highest court did not take up part of the law banning what the state of Indiana calls discriminatory abortions — those sought because of the characteristics of the fetus, including gender, race or disability.

The Indiana law in question was signed in March 2016 by Vice President Mike Pence, who was the governor of theHoosier State at the time. It was barred from going into effect last year by the Seventh U.S. Circuit Court of Appeals.

The court's decision was unsigned and just three pages long, and it emphasized that its decision upholding the fetal-remains provision "does not implicate our cases applying the undue burden test to abortion regulations."

The court noted it was not taking a position on "whether Indiana may prohibit the knowing provision of sex-, race-, and disability selective abortions by abortion providers." It said that since the Seventh Circuit is the only appeals court to have taken up the question, "we follow our ordinary practice of denying petitions insofar as they raise legal issues that have not been considered by additional Courts of Appeals."

The decision to decline to schedule a review of the opinion of the Seventh Circuit comes after a host of states, including Alabama, Georgia, Ohio, Kentucky, Mississippi and Missouri, have passed laws that restrict abortion. Lawmakers have said they hope the bills, along with similar proposals currently under consideration in more than a dozen other states, will incite a blockbuster Supreme Court showdown over the right to abortion the court established in Roe v. Wade.

Justice Clarence Thomas on Tuesday said that while he agrees with the Supreme Court's decision not to take up a challenge to Indiana's abortion provision at this time, he believes it will need to consider the issue soon.

"Although the Court declines to wade into these issues today, we cannot avoid them forever," Thomas wrote. "Having created the constitutional right to an abortion, this court is duty bound to address its scope. In that regard, it is easy to understand why the District Court and the Seventh Circuit looked to Casey to resolve a question it did not address. Where else could they turn? The Constitution itself is silent on abortion."

Thomas expressed his support for the provision of the law requiring fetal remains to be buried or cremated.

"I would have thought it could go without saying that nothing in the Constitution or any decision of this Court prevents a state from requiring abortion facilities to provide for the respectful treatment of human remains," he wrote in a lengthy opinion.

Justices Ruth Bader Ginsburg and Sonia Sotomayor indicated in separate opinions that they would have upheld the Seventh Circuit's decision completely blocking the law form going into effect.

"The case implicates the right of a woman to have an abortion before viability and to obtain it without undue interference from the state," Ginsburg wrote, arguing that Indiana's petition should have been completely blocked.

Indiana has one more controversial abortion case awaiting a possible Supreme Court review, involving a state mandate that would require women to undergo an ultrasound at least 18 hours before getting an abortion. The Seventh Circuit held that the law placed "an undue burden" on a woman's constitutional right to seek an abortion "without any known benefits to balance it" and also blocked its implementation. Indiana appealed the decision to the Supreme Court, which will consider the petition this Thursday.