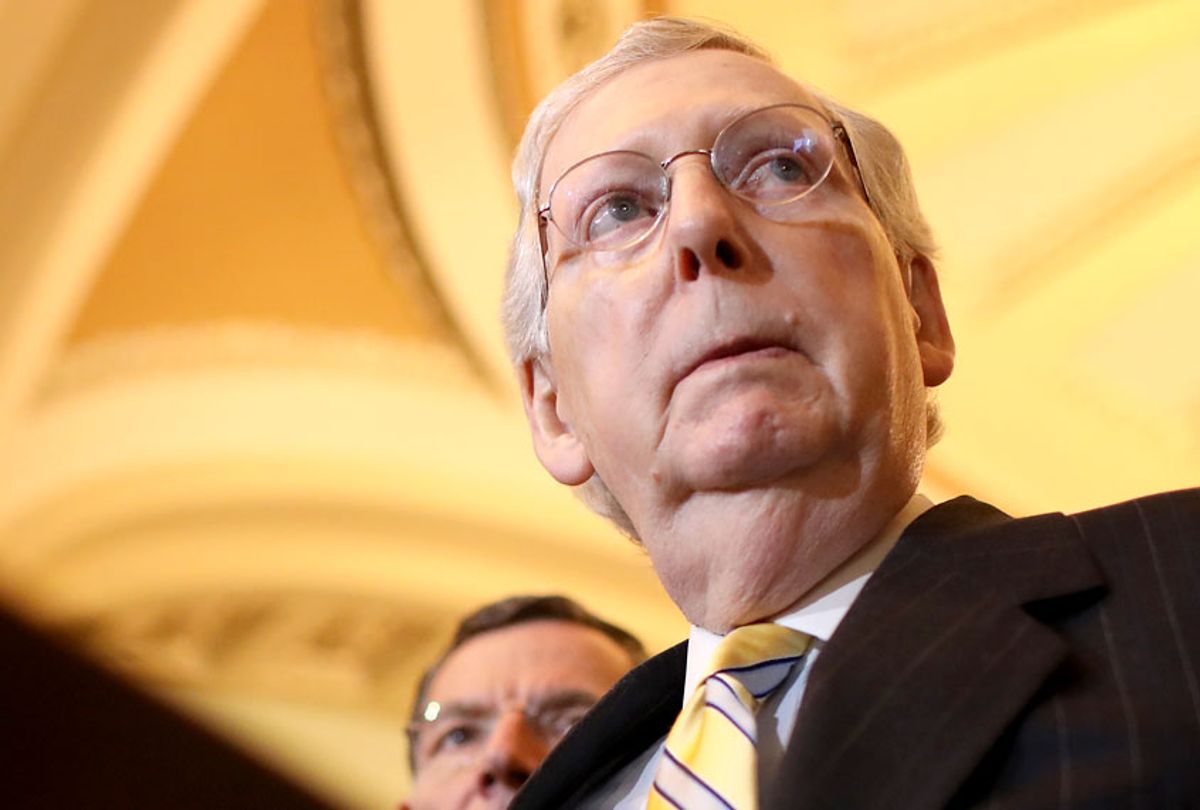 Senate Majority Leader Mitch McConnell has been accused of hypocrisy for saying he would push through a Supreme Court nominee if a vacancy opens up in 2020, despite applying a different standard to former President Barack Obama in 2016.

McConnell made his position known during a Paducah Chamber of Commerce luncheon in his home state of Kentucky. An attendee asked the senator, "Should a Supreme Court justice die next year, what will your position be on filling that spot?" McConnell responded by taking a long sip from his beverage before smiling. "Oh, we'd fill it," he replied. The audience responded to his assetion by laughing loudly, according to CNN.

McConnell led a controversial and ultimately successful effort to block the confirmation of Merrick Garland, a Senate-approved appeals court judge appointed by Obama to serve on the Supreme Court in 2016 after the unexpected death of Associate Justice Antonin Scalia. At the time, McConnell and fellow Republicans argued senators needed to wait to consider a nominee until after the 2016 presidential election in order to give the American people an opportunity to decide who they wanted to see on the bench. Democrats claimed McConnell simply tried to rob the party of a Supreme Court appointment, which they had earned by virtue of Obama's re-election to a second term in 2012.

McConnell and his fellow Republicans not only denied Garland a seat on the bench, but they refused to even hold hearings on his candidacy. After Donald Trump defeated Hillary Clinton in November, Republicans eventually confirmed his nominee Neil Gorsuch to the court. One year later, after the retirement of Justice Anthony Kennedy, Brett Kavanaugh was appointed to the nation's high court.

Senate Minority Leader Chuck Schumer responded to McConnell's comment by tweeting, "Senator McConnell is a hypocrite" along with an illustration. He later added, "Seriously it’s no surprise. @SenateMajLdr McConnell lives for GOP judges because he knows the GOP agenda is so radical & unpopular they can only achieve it in courts. Anyone who believes he’d ever allow confirmation of a Dem President's nominee for SCOTUS is fooling themselves."

Julián Castro, the former Secretary of Housing and Urban Development who is running for president in 2020, expressed similar thoughts in a tweet. "We’ve known all along how hypocritical the @senatemajldr is," the Democratic candidate wrote. "But his shamelessness at stealing a Supreme Court seat is appalling."

He continued, "As President, I will work with the entire Senate to get my appointments confirmed, but won’t hesitate to make a recess appointment to the Court if the Senate refuses to consider my nominee."

A spokesperson for McConnell explained to CNN that the difference between 2016 and 2020 is the same party — in this case, the GOP — now controls both the Senate and the White House.

"I remember during the tax bill, people were agonizing over whether one part of the tax bill was permanent or not. I said, 'Look, the only way the tax bill is permanent depends on the next election.' Because people have different views about taxes in the two parties and they approach it differently when they get in power," McConnell said during the recent luncheon.

He added, "What can't be undone is a life time appointment to a young man or woman who believes in the quaint notion that the job of the judge is to follow the law. That's the most important thing we've done in the country, which cannot be undone."