GOP tax cut bill had nearly no effect on growth, GDP or wages

Trump and Paul Ryan poured all their political capital into the GOP dream of big tax cuts. Their effect was minimal 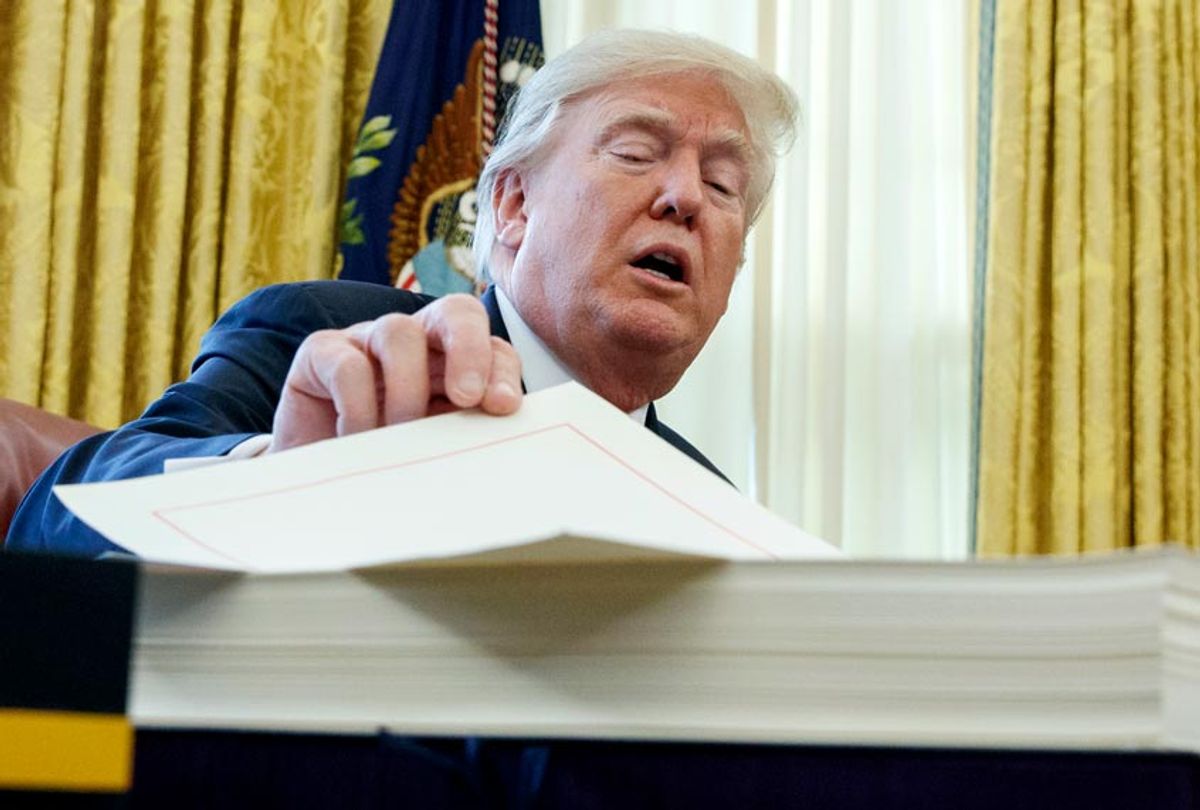 Donald Trump prepares to sign the tax bill in the Oval Office of the White House, Friday, Dec. 22, 2017, in Washington. (AP/Evan Vucci)
--

President Trump’s 2017 tax cuts had nearly no positive effect on economic growth or wages but saved corporations a ton of money, according to a new report from the nonpartisan Congressional Research Service.

Trump bragged last month that he was “absolutely right” that the tax cuts would be “rocket fuel for the American economy” but the new report shows that the positive effects of the law have been minimal and largely helped corporations without doing much to boost hiring or wages.

“The growth effects tend to show a relatively small (if any) first-year effect on the economy,” said the report from the CRS, a nonpartisan think tank that produces economic analyses for members of Congress.

Though Trump bragged that the tax cuts would pay for themselves, the report found that the growth spurred by the tax cuts amounted to 5% or less of the growth needed to fully offset the revenue loss from the Act,” or just 95% short of Trump’s estimate.

The study found that while wages grew a little, the inflation-adjusted wage growth “is smaller than overall growth in labor compensation and indicates that ordinary workers had very little growth in wage rates.”

The report’s authors also debunked Trump’s claim that money was being repatriated from offshore tax shelters. “The evidence does not suggest a surge in investment from abroad in 2018,” the report stated.

Trump also bragged that the tax cuts were resulting in big bonuses for employees, but the report threw cold water on that claim too.

“While evidence does indicate significant repurchases of shares, either from tax cuts or repatriated revenues, relatively little was directed to paying worker bonuses, which had been announced by some firms,” the report said. “With US employment of 157 million, this amount is $28 per worker. This amount is 2% to 3% of the corporate tax cut, and a smaller share of repatriated funds.”

The study did find one big winner: large corporations.

Despite the additional money, the authors of the report said it was “premature” to say that these companies are investing more capital than they had been.

“To date this pattern has not been observed,” they said.

With the much-hyped economic growth failing to cover 95 percent of the cost of the tax cuts, Trump has proposed huge cuts to programs that help the poor, elderly and disabled to make up part of the deficit.

The budget proposal released by the White House in March called for massive cuts to Medicare, Social Security, Medicaid, the Centers for Disease Control and Prevention and National Institutes of Health, food aid and welfare programs, student loan programs and housing programs.

House Democrats ripped Trump’s plan for “using the levers of government to help wealthy individuals and corporations at the expense of hardworking Americans,” adding that the proposal is a “cynical document replete with backward priorities, broken promises, and blatantly dishonest gimmicks.”