Robert Mueller's past imperfect: A man trapped in a vanished world

Had we but world enough and time, this coyness, Bobby, were no crime. But dude — even your grammar is a tell 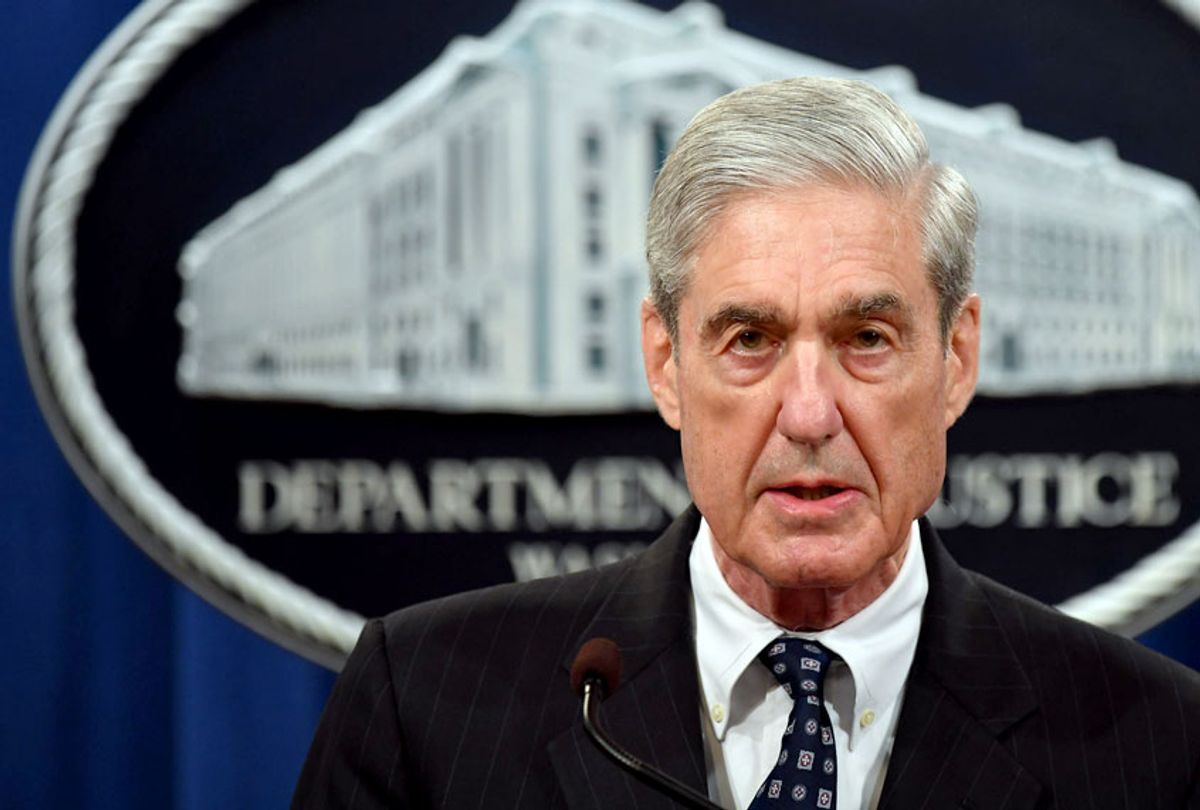 I doubt I need to convince anyone who is likely to read this article what Robert Mueller meant to convey during his brief televised appearance at the Justice Department on Wednesday. He believes Congress should impeach President Trump, or should at least explore that possibility seriously.

After nearly two years of investigation, the now-former special counsel has concluded that the president of the United States probably or certainly obstructed justice. (I’ll get to exactly what Mueller said later, because that’s important.) Indeed, Trump has repeatedly obstructed the investigation into his own obstruction of justice, and has no doubt also obstructed the investigation into that secondary obstruction (and so on!), a Möbius strip or Quaker Oats conundrum that epitomizes the dream-logic at work in this administration, and for that matter in America in 2019.

Mueller knew he could not indict a sitting president — "knew" and “could not” in this case being terms of art not backed up by any clear guidance from Congress, the Constitution or the Supreme Court — and concluded that in the absence of potential criminal proceedings it would be unfair to make a criminal accusation. There's a certain mechanical logic to that, whether or not it makes any sense in moral terms.

As Mueller put it, in an almost coquettish turn of phrase that would have merited a curt nod of approval from his long-ago rhetoric instructors at St. Paul’s School in Concord, New Hampshire, “the Constitution requires a process other than the criminal justice system to formally accuse a sitting president of wrongdoing.” That’s so interesting! I wonder whether that process has a name?

As Rep. Alexandria Ocasio-Cortez observed on Twitter, Mueller appeared to be playing a game of Taboo with Congress. Excitement is building, and Nancy Pelosi is on the clock: Can she guess the magic word?

But if Mueller meant to tell Congress, with an extended sidelong glance at the American public, Hey, here’s the evidence, now do your damn jobs, the next question for almost everyone becomes why the hell he didn't just say that. Neither Watergate special prosecutor Leon Jaworski nor the notorious Bill Clinton scourge Ken Starr were the least bit coy about the incriminating nature of their findings. So what’s with all the indirection and artful circumlocution and what-the-meaning-of-is-is tightrope walking?

Although Wednesday was surely not a fun day at the White House, Mueller left just enough room between what he actually said and its obvious implications for Trump’s minions and camp followers to cling, however half-heartedly, to the narrative that he has been completely or mostly or at least sort of exonerated. (Or that the whole thing has been a witch hunt, logical consistency being no longer a virtue.)

That kind of ambiguity is immensely frustrating for people who still hold out hope that this whole affair — that is, the Trump presidency — will have some satisfying resolution, with Lindsey Graham wearing sackcloth and weeping in repentance, and mythical Trump voters in their mythical heartland diners gazing into their cups of watery coffee with a newfound sense of perspective on America’s story and what it all means. Instead we got an extended both-sides news analysis in the New York Times on Wednesday evening, nominally arguing that no one in Washington could agree on how to decode Mueller’s message. Since that’s an enormous lie, the actual point of the article, as I read it, was to urge Pelosi to heed the wise words of those who urge her to avoid impeachment — such as former Republican Sen. Jeff Flake, in mainstream-media-land the very definition of a disinterested source.

Mueller may yet be dragged before Congress, apparently against his will, to deliver more cryptic comments we can parse for nuggets of hidden meaning. But as for why he said what he said on Wednesday, and why he said it the way he said it, that’s not much of a mystery. Law professor John Q. Barrett, who was an associate independent counsel during the Iran-Contra investigation, described Mueller to the Times as “rooted in the Justice Department” and possessed of “a kind of G-man temperament.”

In a similar vein, Michael Tomasky’s Times op-ed waxed borderline poetic on the “clash of Robert Mueller’s two Americas,” one of them the land of elite prep schools and military service and old-line bipartisan collegiality that Mueller “has served with rectitude and dignity.” Tomasky doesn’t even say what the other America is, and I guess he doesn’t have to: It’s being made great again!

If those are our only two choices, I’ll definitely take whatever is behind Door No. 3, but we get the point: Mueller is a straight shooter, an institutionalist, a believer in process over politics. Or to put it another way, he's an old guy from a nosebleed-aristocratic background, who was reared on powerful myths about his own nation. He's trapped in a story about the past that is corrupting the present, an American dilemma since well before Jay Gatsby.

A friend who has a long track record in Democratic politics and once worked for Bill Clinton put it more directly: Consensus-building moderates who put their trust in the existing system, he said, “have no strategy for dealing with fascism.” As for me, I can see Mueller’s two Americas right there in the text of his remarks, in his literal grammar.

Most news sources reported Mueller as saying, in the closest thing to a money quote, “If we had confidence that the president clearly did not commit a crime, we would have said so.” Understandably, everyone was rushing toward the meaning of that sentence, but the transcription is not accurate.

Mueller actually said, “If we had had confidence” — an entirely correct and appropriate usage of the past perfect, an English tense hardly anyone uses in conversation and most people apparently cannot even hear.