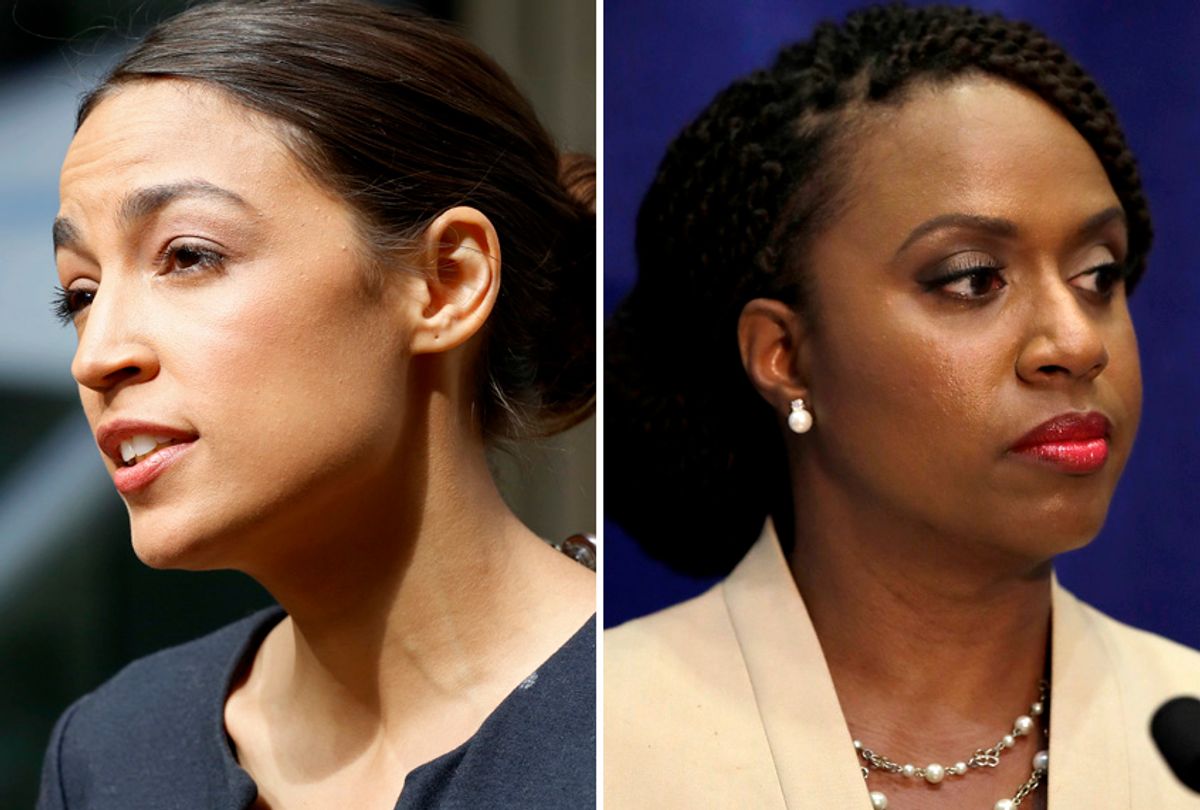 Progressive Democrats are going on record with their displeasure over the establishment higher-ups' decision to protect incumbents, a reflection of the party's division over a vendor blacklist.

On Sunday, the New York Times published an article from reporter Jennifer Steinhauer in which a number of the party's rising stars took public positions against a March decision by the Democratic Congressional Campaign Committee (DCCC) to blacklist vendors who work with anyone — including primary challengers — who runs against an incumbent Democrat.

As Common Dreams reported at the time, the policy says the DCCC "will not conduct business with, nor recommend to any of its targeted campaigns, any consultant that works with an opponent of a sitting member of the House Democratic Caucus."

Rep. Jahana Hayes, D-Conn., who won her seat by beating fellow political newcomer Mary Glassman in a primary contest for retiring Rep. Elizabeth Esty's seat in 2018 before winning the general election, said that the policy is choking off the possibility of fresh ideas and and a new generation of leaders.

"If I waited my turn, I wouldn't be here," Hayes told the Times. "There is a gatekeeper mentality that sometimes can diminish new ideas."

That point was echoed by Steve Welchert, a spokesperson for Crisanta Duran, who is challenging Rep. Diana DeGette, D-Colo., in next year's primary.

"It is having a chilling effect on everyone's capacity to move forward," said Welchert, who also called the DCCC policy "bullying."

Other Democrats Steinhauer spoke to were more specific in their criticism, citing the party's incumbent bench of white men as the main thing that will be protected by the new rules. Two-thirds of the caucus's longest-serving members are white, and two-thirds are men.

"It is hard enough for challengers, for a lot of reasons," said the consultant, Amy Pritchard, who worked last year for Representative Ayanna Pressley, Democrat of Massachusetts, in her successful campaign to defeat a 10-term Democratic incumbent. "And this policy is a bridge too far. I'd like to see a majority of women in Congress, and it’s not going to happen with this policy."....

The new policy will most likely block candidates seeking to follow in the footsteps of Ms. Pressley, who is black, and Representative Alexandria Ocasio-Cortez of New York, who is of Puerto Rican descent, both of whom defeated veteran white male Democrats last year, Michael Capuano and Joseph Crowley.

"The only time they support getting more women is when male incumbents leave or die," said Winstead.

"It makes sense that the incumbent faction would try to block the challengers," writer David Menefee-Libey said on Twitter, adding that he was referring both to candidates and the entrenched consultant class that runs Democratic campaigns.

Menefee-Libey's read was similar to that of NBC News reporter Jonathan Allen, who put the DCCC action in the context of where the organization gets its money — and who it protects. They're not necessarily the same people, said Allen.

"The DCCC is an incumbent-protection organization funded in part by member dues," Allen said. "But, over time, its budget has grown as a result of fundraising outside of members and their big-dollar supporters. So, they're now asking grassroots to fund incumbent-protection services."

Thus far the policy has only been softly enforced, but it's had an effect.

In April, Common Dreams reported that Marie Newman, an Illinois Democrat challenging anti-choice incumbent Rep. Dan Lipinski, was having trouble finding people to work on her campaign due to the blacklist. Earlier that month, a story at The Intercept showed the same issue was being navigated by McKayla Wilkes, who is running to replace longtime Democratic Rep. Steny Hoyer of Maryland, the current majority leader.

"But," Barrow said, "the progressive grassroots will have their backs."