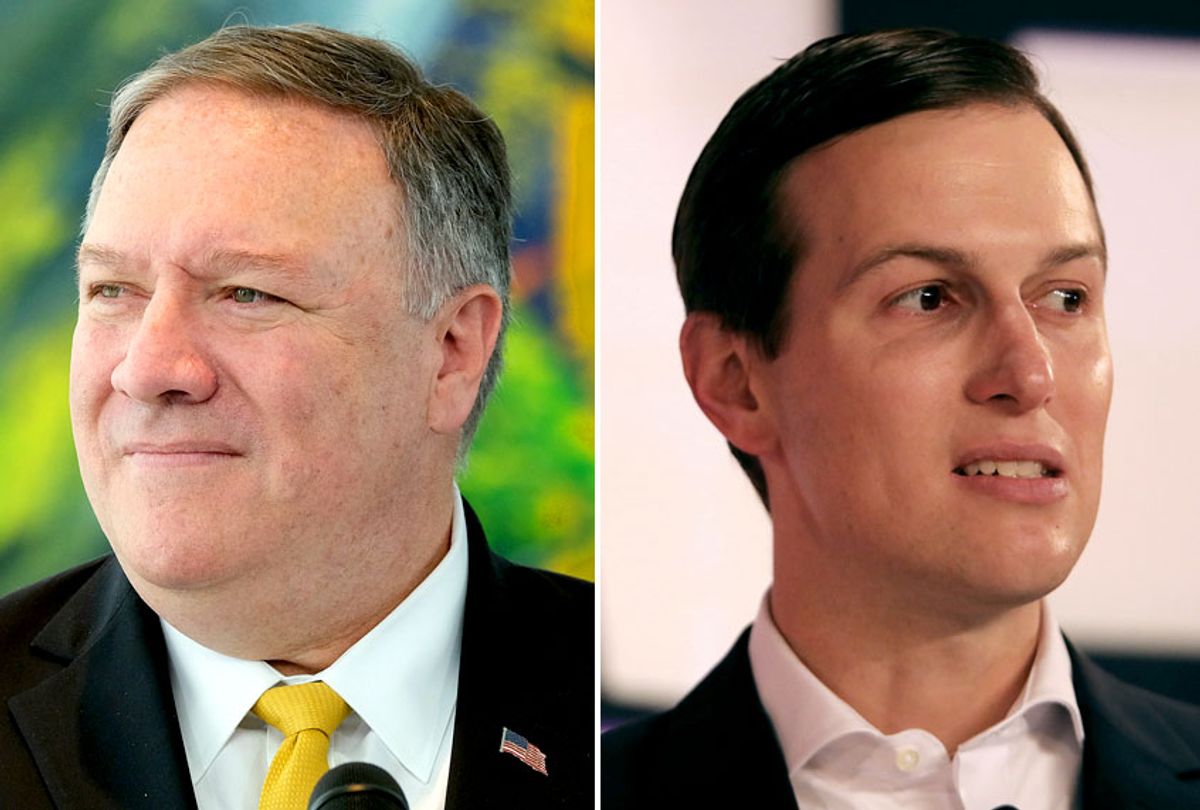 Secretary of State Mike Pompeo admitted that the Trump administration's Middle East peace plan could be seen as "unexecutable" while Jared Kushner, the president's son-in-law and senior adviser, suggested that Palestinians aren't capable of governing themselves.

Kushner, who's in charge of the administration's supposed peace plan, made the comments in an interview that aired Sunday on "Axios on HBO." He told interviewer Jonathan Swan that there is a "high bar" for Palestinians to be rid of Israeli interference.

Kushner said that before Palestinians can be seen worthy of investors' money, they "need to have a fair judicial system ... freedom of press, freedom of expression, tolerance for all religions."

As Swan noted, the Trump administration has taken numerous actions that suggest it's not an honest broker in forming a peace deal. For example, the administration closed its consulate general in Jerusalem; Trump's ambassador to Israel said the country is "on the side of God"; the administration moved the U.S. embassy from Tel Aviv to Jerusalem; and it cut millions in humanitarian aid to Palestinians, including funds for the United Nations Relief and Works Agency for Palestine Refugees in the Near East (UNRWA).

"Can you not see why [Palestinians] might not want to talk to you and that they might not trust you?" asked Swan.

"The actions we've taken were because America's aid is not entitlement, right? If we make certain decisions — which we're allowed to as a sovereign nation to respect the rights of another sovereign nation — and we get criticized by that government the response of this president is not to say, 'Oh, let me give you more aid.' So, again, that was a result of decisions taken by the Palestinian leadership," Kushner continued. "With regards to the Palestinian people, I do believe that they want to have a better life, and I do think that they're not going to judge ..."

"They don't mind the aid being cut?" interjected Swan.

"They're not going to judge anything based on trusting me or trusting anyone else," said Kushner. "They're going to judge it based on the facts and then make a determination — do they think this will allow them to have a pathway to a better life or not?"

Kushner's interview aired the same day as comments by Pompeo at a private meeting of the Conference of Presidents of Major American Jewish Organizations last week were leaked.

In the remarks, first reported Sunday by the Washington Post, Pompeo said the Trump administration's Mideast plan could be "unexecutable" and "may be rejected."

"I get why people think this is going to be a deal that only the Israelis could love," he said. "I understand the perception of that. I hope everyone will just give the space to listen and let it settle in a little bit."

If Israel annexes the occupied West Bank, Pompeo said the administration would weigh "what would be the best ways to achieve the outcomes that we think are in America and Israel's best interests."