The prenup shows Trump's $100,000 child support payments for daughter Tiffany would stop if she joined the military 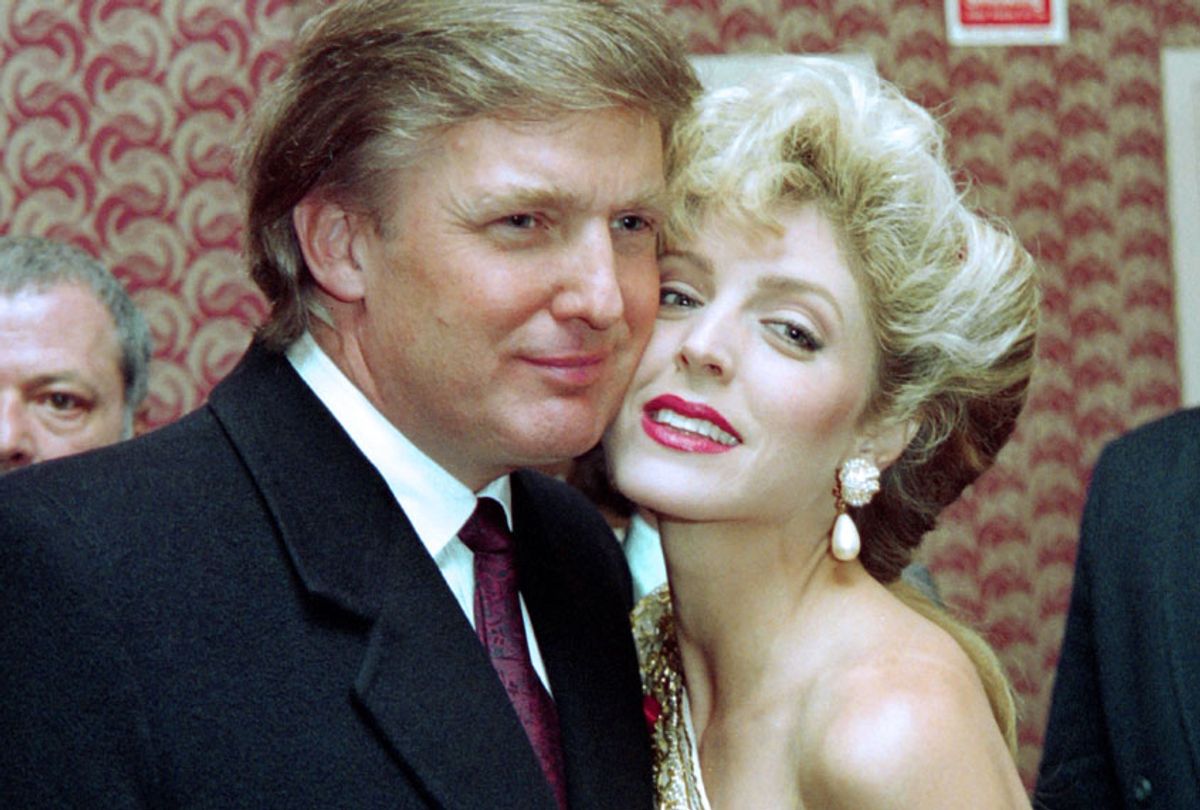 Donald Trump and Marla Maples pose as they confirm published reports that the actress is pregnant with his child, April 7, 1993. (Getty/HAI DO)
--

President Donald Trump's newly revealed prenuptial agreement with his second wife Marla Maples provides a new window into how the former real estate mogul, who has sought to conceal his personal finances, made his fortune — and how he attempted to keep his businesses afloat.

The pair's relationship began in true Trumpian fashion, with the words "Best Sex I've Ever Had" splashed on the front page of the New York Post in 1990 and attributed to Maples alongside a picture of a beaming Trump, her soon-to-be-husband. But the prenup, signed a year after Trump divorced his first wife, Ivana Trump, details how Trump attempted to protect his assets from Maples in the event of a divorce. (After four years, the pair, indeed, separated. Maples moved to California, where she raised their daughter, Tiffany, and largely stayed out of the public eye.)

Since the beginning of his tenure as a real estate developer, Trump has presented himself as a self-made billionaire, who launched a business empire by building on his father's success of engaging in riskier business ventures and relying on his "master" dealmaking skills. He once even allegedly posed as a Trump Organization official to inflate his net-worth in order to land on Forbes' list of the richest people in America — and his approach to the 1993 prenup was no different.

Despite claiming he was worth $1.17 billion in the agreement, Trump "in all likelihood" was not an actual billionaire at the time, Vanity Fair reported Tuesday. (In fact, Trump lost nearly $1.2 billion between 1985 and 1994, The New York Times reported earlier this year. Those business losses kept him off Forbes' annual list of billionaires from 1990 to 1995.)

"More than anything, the prenup shows how fiercely Trump wanted to protect the money he did have," Vanity Fair noted. The magazine continued:

Maples reportedly wanted $25 million, but Trump agreed to pay her only $1 million if they separated within five years, plus another $1 million to buy a house. Trump also would stop making $100,000 child support payments for Tiffany when she turned 21. The agreement states that Trump's payments would cease earlier if Tiffany got a full-time job, enlisted in the military, or joined the Peace Corps.

Maples agreed to the deal. "She was telling people it was love," a source who knew her told Vanity Fair. In five years, Maples had hoped Trump "would renegotiate a better deal."

The terms of the prenup were not the only mystifying detail to emerge from the agreement. In financial statements included in the contract, Trump "provided extremely optimistic values for his real estate assets," according to Vanity Fair. He stated the Trump Taj Mahal in Atlantic City was worth $1.25 billion, despite frequently missing debt payments. (The casino found itself in bankruptcy court just a year after it opened.) He also "valued the Trump Castle and Trump Plaza casinos $450 million and $650 million, respectively," and both went bankrupt in 1992.

Trump's accountants at Spahr, Lacher & Sperber did not affirm his hazy math, telling the magazine they "have not audited or reviewed" the numbers Trump provided. "Assets are presented at current values estimated by Trump using various valuation methods," they added.

While Trump has been steadfast in touting his financial success, he has also been reluctant to release his tax returns to the public, despite mounting pressure from Congress.

Treasury Secretary Steven Mnuchin has rejected a subpoena from the House Ways and Means Committee to provide six years of Trump's tax returns, arguing the request to turn over the president's returns would create a dangerous precedent. House Democrats, meanwhile, have argued they need to see the president's returns to ensure the IRS was conducting audits properly, and they're expected to sue in federal court to enforce the subpoena.

Democrats have been on a quest to obtain Trump's tax returns, since he bucked decades of tradition when he refused to release them during the 2016 election cycle. Although not required by law, every major party presidential nominee since the 1970s has chosen to publicly release his or her tax returns except for Gerald Ford, who only released a summary. Financial disclosures can help paint a fuller picture of a candidate's business positions and interests by providing information about financial dealings, such as investments, donations, business relationships, assets and possible conflicts of interests.

Trump has made clear he does not want to turn over his tax returns, claiming he cannot disclose them since he is being audited by the IRS — even though an audit does not prevent a taxpayer from releasing his or her own tax documents. The White House has indicated it plans to continue to fight congressional requests for information about the president's finances.

Democrats have requested Trump's returns as part of their wide-ranging investigations into potential conflicts of interests posed by his business dealings. Republicans, meanwhile, have criticized the request as merely a pretext for a political attack.