"She sounds like Donald Trump at his best," the host of "Tucker" told his conservative viewers on Wednesday 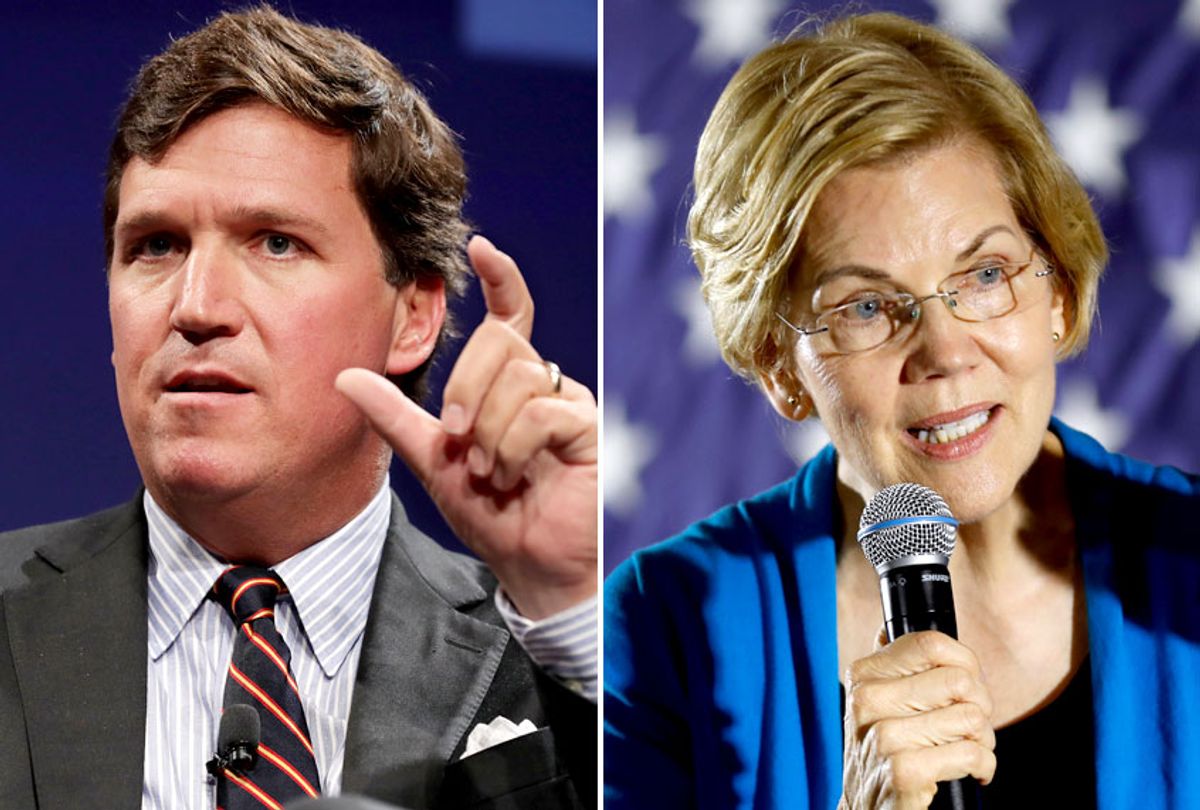 "She says the U.S. government should buy American products when it can, and of course, it should. She says we need more workplace apprenticeship programs, because four-year college isn't right for everyone," Carlson began. "Well, that's true."

"She says that taxpayers ought to benefit for the research and development they pay for. And yet, she writes, 'We often see American companies take that research and use it to manufacture products overseas like apple did with the iPhone,'" Carlson continued, reading Warren's policy about to his Fox News audience. "'The companies get rich, and American taxpayers have subsidized the creation of low-wage foreign jobs.' She sounds like Donald Trump at his best."

Nevertheless, Carlson alleged that Warren was still the same "race-hustling, gun-grabbing abortion extremist." He also threw out the term "socialism" — a favorite new buzzword of his Fox News colleagues.

"In Washington, almost nobody speaks for the majority of voters," Carlson opined of the current state of American politics.

Of the policy, which aims to recalibrate the compass of trade policy toward American workers in the labor market, my colleague Sophia Tesfaye explained Wednesday how Warren's rhetorical framework chips away at one advantage Republicans hold over Democrats:

Warren's rhetorical frame of “economic patriotism" aims to neutralize a Republican advantage that Democrats have long complained about but have never successfully combatted. In a July 2018 survey, Republicans polled nine points ahead of Democrats on their perceived handling of the economy. But Democrats began to gain ground on the issue in the lead-up to the midterm elections, just as Trump’s tariffs began to hurt the proverbial white working-class voters who had switched from Democrat to Republican in 2016. This is the same voter group Democrats are targeting in 2020, on the premise that even small gains in a few key states would likely be enough to retake the White House.

Warren’s “economic patriotism" will certainly be portrayed as radical, left-wing or "socialist" by Republicans. That may indicate that they know they are vulnerable. Trump's rhetoric was effective in 2016, but he has delivered nothing, and Warren's appeal to patriotism now seeks to neutralize his biggest advantage.

Carlson expressed similar views about Warren during an interview with Salon earlier this year. At one point, he acknowledged it would be possible for one parent in a two-parent household to raise their children.

"By the way, I'm with Elizabeth Warren on this," Carlson told Salon. "She wrote a whole f**king book about it. She wrote a whole book on this called, 'The Two-Income Trap.' And she made the case that when our society changed in such a way that it took two incomes to support a family. Everybody got poorer and less happy — I agree with that."

The "Tucker Carlson Tonight" host later added, "If you haven't taken a look at the book that Warren wrote, I think it may have been in 2004, with her daughter — I believe it's called 'The Two-Income Trap.' It is so interesting. I don't agree with all of it, but just imagine living in a world where people can say that out loud. The goal is the society, where parents can stay home with their kids if they choose on one income."

If there was a Democrat in 2020 in this election who made that primary plank in the platform, I would vote for that person. That's how important I think it is. If Elizabeth Warren came out and said, "I wrote a whole book on this and I want our economy to support parents on one income, families on one income, not so we can hire some person from the Third World to work at minimum wage and raise your kids, but so that you can have an intact family. You can live in a way that we all know is better."

In rich neighborhoods in America, there's a parent raising those kids overwhelmingly. I live in one — so I know. There's a parent raising those kids. Why shouldn't everybody have that chance? If she ran on that, I would vote for Elizabeth Warren, and I would say so in public. That's what I'm calling for, and I don't care who provides it. Why would I?

You can watch the full segment below via Fox News: