"Dark Phoenix" fails to rise: X-Men should have gone out with "Logan" instead

If you want a great finale to the "X-Men" series, skip "Dark Phoenix" and watch "Logan" again 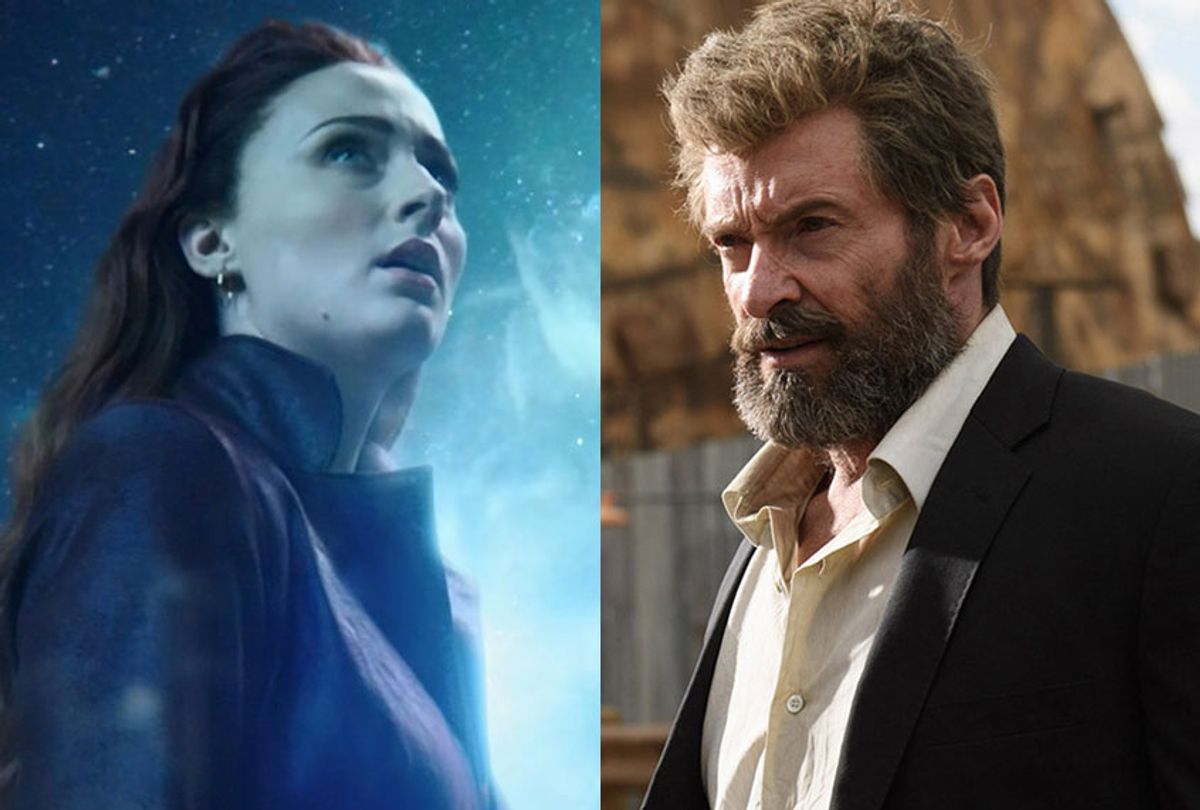 "Logan" is the proper finale to the "X-Men" film series. "X-Men: Dark Phoenix," though effectively the last movie to be released in this cinematic universe, is so disappointing that it doesn't deserve that honor. (Technically the last of this crop of "X-Men" movies will be 2020's oft-delayed "The New Mutants," which seems to be more of a standalone story.) Therefore, instead of simply panning "Dark Phoenix," I'm going to make the case that it should be replaced in the hearts and minds of "X-Men" fans with "Logan" as the real finale for this version of the franchise. (I wrote my farewell tribute to the early 21st century "X-Men" movies earlier this week.)

If you're a comic book fan, you will recognize "Dark Phoenix" as an adaptation of "The Dark Phoenix Saga," a famous "X-Men" storyline in which the powers of Jean Grey/Phoenix (Sophie Turner) are amplified by her bonding with a supernatural entity known as the Phoenix Force. Continuing the recent tradition of setting one "X-Men" film in each of the last four decades of the 20th century, this one takes place in 1992 and starts when Grey bonds with the Phoenix Force after absorbing a solar flare into her body. That sets in motion a series of subplots, all of them borrowed from other (not always better) movies.

First there is the infamous 2006 film "X-Men: The Last Stand," of which this movie is practically a remake. Indeed, "Dark Phoenix" director and writer Simon Kinberg was actually a co-writer on "The Last Stand," and this one doesn't deviate from the first story's major plot beats: Jean Grey becomes a quasi-antagonist after her powers grow, she breaks away from the ones she loves, eventually loses control of her powers and ultimately brings every main protagonist to their bittersweet ending. In both movies the key relationships for Phoenix are with a love interest (Tye Sheridan's Scott Summers/Cyclops here, James Marsden's Cyclops and Hugh Jackman's Wolverine in the original), father figure Charles Xavier/Professor X (James McAvoy) and various side characters — some developed, others not so much. This time more attention is paid to the story arcs of Raven Darkhölme/Mystique (Jennifer Lawrence), Hank McCoy/Beast (Nicholas Hoult) and Erik Lehnsherr/Magneto (Michael Fassbender), whose love/hate friendship with Professor X can be the high point of an "X-Men" movie when done right. Ororo Munroe/Storm (Alexandra Shipp), Kurt Wagner/Nightcrawler (Kodi Smit-McPhee) and Peter Maximoff/Quicksilver (Evan Peters) receive less attention.

There are also some superficial comparisons to be made between "Dark Phoenix" and a much better superhero film, "Captain Marvel." Both movies are set in the 1990s, but "Captain Marvel" actually has fun with being a period piece and takes advantage of its '90s setting. This was also true of the other three "X-Men" films to follow this decade-by-decade formula — "First Class" with the 1960s, "Days of Future Past" with the 1970s and "Apocalypse" with the 1980s. Similarly, "Captain Marvel" also had shapeshifting aliens, although the Skrull in "Captain Marvel" were better developed because they felt like individuals rather than generic villains, and their storyline included a clever twist. "Dark Phoenix" wastes Jessica Chastain by writing her as a by-the-numbers antagonist named Vuk, who is completely forgettable. There is even an element of "Shazam!" in the opening scene, which gives Jean Grey a backstory similar to that of the "Shazam!" antagonist.

Finally "Captain Marvel" also includes many light and funny moments, while "Dark Phoenix" only achieves semi-solemnity when it's trying to be upbeat. Bleak superhero movies can work, of course, but it has to be because they're attempting something new. "Dark Phoenix" is as far from "new" as a movie can be.

Compare that to "Logan." That was also a bleak film, far more so than "Dark Phoenix." It is set in 2029, making it the last film chronologically in this "X-Men" film universe — and also providing us with one reason why it works better as the proper "X-Men" finale. The ending of "Logan" also works in a bold and poignant way, providing the kind of closure that any story could be proud of.

It brings the series to an extremely tragic conclusion: No mutant has been born in a quarter century and the world is a dystopian hellhole. The cause of a happy and flourishing future for mutants, the one that animated Professor X's life (Patrick Stewart) and caused him to found the X-Men, is in its death throes. The same can be said of Professor X himself, whose once-sage mind has been reduced to a shadow of its former self by the ravages of Alzheimer's disease. Because of his seizures, he occasionally becomes an accidental weapon of mass destruction himself, a fact that we learn caused him to do something terrible to many of the other X-Men.

Logan/Wolverine himself (Hugh Jackman) is also dying. The once-invulnerable man no longer heals as effectively as he used to; he's slower, covered in scars, and relies on alcohol to deal with his constant pain. His caretaker relationship with Professor X is the movie's unsung highlight: We know from their interactions in previous films that Professor X rescued Wolverine from himself and helped him find a purpose, even though the cynical and surly lug never wanted to admit it. That backstory is embedded in Jackman's and Stewart's textured and heartbreaking performances, discernible even to one hasn't seen a single other "X-Men" movie.

Wolverine no longer believes in the cause, but he still loves his teacher and is devoting his final years to helping them both survive, while brooding over the end of his own life and everything he loved. When events conspire to put Wolverine in charge of an 11-year-old girl named Laura (Dafne Keen), he has to learn to become a hero one more time — and to learn how to find purpose in loving, living and eventually dying.

It's a character study to end all character studies, a perfect send-off to this version of the Wolverine character that ties up the underlying story of the "X-Men" series in an equally cathartic way. The bleakness works because it feels earned. In addition to its heart, it is buoyed by an interesting concept — a superhero-movie-as-Western, with visual references to classic Westerns like "Shane" (1953), "The Cowboys" (1972) and "Unforgiven" (1992). There are also dystopian sci-fi elements here, although those are more common in the superhero genre.

The final scenes in both films best illustrates why "Logan" is both a better movie and a more fitting finale than "Dark Phoenix." The last shot of "Dark Phoenix" references an iconic image used throughout the series — so overused that it feels downright uninspired at this point — followed by  another image which ties up this immediate story but says nothing deeper about the "X-Men" series as a whole.

"Logan" ends, by contrast, with the mutant children saved by the titular character gathering around his grave. As they leave to head toward an uncertain future, his daughter turns his grave marker on its side to make it an X instead of a cross. This works on several levels: It's a direct visual reference to Wolverine's status as the last of the "X-Men," a deft use of Christian iconography to make a point about the X-Men's larger cause and an emotionally appropriate way of wrapping up the original "X-Men" story (tragically, but with a flicker of hope).

Sadly there will never be a follow up movie to erase "Dark Phoenix" from the canon, like 2014's "X-Men: Days of Future Past" did to "The Last Stand." Thankfully, "Logan" is the final story to occur chronologically within this "X-Men" series, and even if it wasn't, it remains a far more satisfying conclusion to that larger story in every conceivable way. If you want to say a proper goodbye to this series of "X-Men" movies, you're better off spending your time on "Logan" again than "Dark Phoenix" for the first time.