The end of an "X-Men" era: What the movies that end with "Dark Phoenix" did for superhero films

"X-Men: Dark Phoenix" will be the closing chapter in the "X-Men" series that began in 2000 and started so much 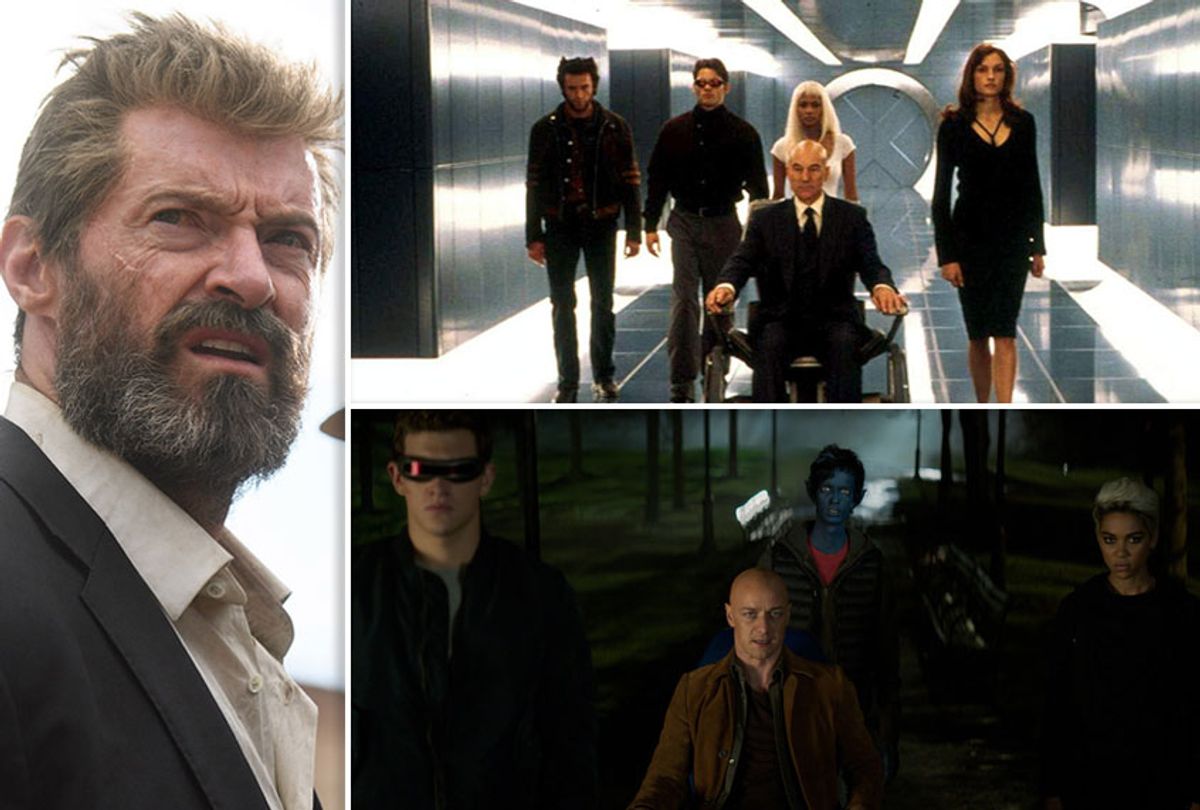 Back in April, my colleague Melanie McFarland wrote an outstanding article on how 2019 marks the end of three landmark franchises in American pop culture — the "Game of Thrones" TV series, the story arcs for the original core Avengers in the Marvel Cinematic Universe and the nine-part Skywalker saga in the "Star Wars" movies.

Yet there is a fourth franchise that belongs on that list as well, one that is also going to wrap up in 2019 — indeed, before the end of this week: The "X-Men" film series.

It is not an understatement to say that the "X-Men" movies are historic. The original "X-Men" film, released in 2000, revitalized the superhero genre after it had been brought low by a series of terrible late '90s movies. ("Batman & Robin," anyone?) Over the course of the following 18 years — as Christopher Nolan released his classic "Dark Knight" trilogy and the Marvel Cinematic Universe grew from a gleam in Kevin Feige's eye into the global behemoth — the "X-Men" series chugged along, producing 10 additional movies of varying quality. In the process, it established that a larger cinematic universe was possible for superhero flicks, even if it didn't formally refer to itself as such, and demonstrated that intelligent, complex stories could be told through that genre: "X-Men" as a parable about racism and genocide, "X2" about gay rights, "Logan" about death and existential despair, etc.

After Disney took over the "X-Men" series following its acquisition of 20th Century Fox, it was unclear what the fate of the movies would be... that is, until April. That's when Fox executive Emma Watts told a crowd at the annual ComicCon event in Las Vegas that "X-Men: Dark Phoenix," which is being released this week, will be the "perfect sendoff for our X-Men team."

A couple of points are worth noting here. The first is that technically "X-Men: Dark Phoneix" is not the last movie to be made in the universe of the "X-Men" series that began in 2000; that distinction belongs to "The New Mutants," a horror film whose release has been delayed so many times (from 2018 to 2019 and now to 2020) that one has to wonder if it will ever see the light of day — or, for that matter, what is going on behind the scenes with the business folks behind making it. Yet even if "The New Mutants" does get released, it doesn't contain any of the major characters or story arcs from the first 12 movies, so it is safe to say that it will be of a more standalone oddity than a direct continuation of the series in its own right.

More important, though, is the fact that it makes perfect sense for the "X-Men" movies to be rebooted in the Marvel Cinematic Universe rather than transplanted from the existing series into the new one. While the Marvel gurus could find some forced way to shoehorn the old characters into their series, it would feel jarringly out-of-place simply because the two have already thoroughly fleshed out completely different storylines and narrative tones. Much as it might be fun in theory to see Hugh Jackman's Wolverine/Logan or Sophie Turner's Phoenix/Jean Grey interact with the new generation of Marvel Cinematic Universe superheroes, the logistics of cramming them together would almost certainly be more trouble than their worth. Hence why "X-Men: Dark Phoenix" is going to be the series' swan song — and rightly so.

With all of this said, one question remains: What is the legacy of the "X-Men" film series?

While those are the four categories of "X-Men" movies, the movies within those groups range from landmarks in the history of film to cringe-worthy embarrassments. "Logan," for example, is arguably one of the greatest superhero movies of all time, envisioning a dark conclusion for the Wolverine character (and, since it is the last film chronologically within the series' continuity, by extension all of the other X-Men) that becomes a poignant character study for the titular hero himself. If any movie captures what is best about the "X-Men" series — deep characters, well-choreographed fights, convincing special effects, searing social commentary — it is "Logan." Yet "X-Men Origins: Wolverine," though also a Wolverine-centric film, is without question one of the worst films in the entire franchise, straddling the line between camp and melodrama without ever indulging in either quality in an entertaining way (it also has the ignominious distinction of totally botching the introduction of Ryan Reynolds' Deadpool character).

The low point in the series, though, is "X-Men: The Last Stand," a movie so bad that virtually no "X-Men" fan was unhappy when Singer erased its narrative from the larger continuity at the end of "X-Men: Days of Future Past." That film took all of the subplots that fans had become invested in from the previous two "X-Men" movies and brought them to rushed, contrived and at times intellectually insulting conclusions. Thankfully, no other "X-Men" movie would hit that nadir: The first two "X-Men" films are genuine classics, laying the foundations of what an "X-Men" movie is supposed to feel like while telling compelling stories with iconic characters, especially Patrick Stewart as Professor X; "X-Men: Days of Future Past" is also a modern-day classic, adding new layers to the Mystique character thanks to Jennifer Lawrence's performance and allowing the two "X-Men" timelines to collide in a clever way; and "X-Men: First Class," "The Wolverine" and "X-Men: Apocalypse" are all good, solid superhero movies, even if they don't achieve transcendent levels.

The "Deadpool" movies fall into something of their own category here, both because they alone seem likely to be continued by Marvel (even if rumor has it that he will not be brought directly into the Marvel storylines) and because they never really situated themselves squarely within the other "X-Men" movies. The "Deadpool" films were always more their own puckish thing, with Reynolds playfully ribbing the "X-Men" movies while telling his own pair of self-contained stories. Both of those films are excellent if you're a fan of Reynolds' sense of humor (which I am), less so if you're not.

For those of you keeping score, that adds up to six excellent movies ("X-Men," "X2," "X-Men: Days of Future Past," "Deadpool," "Logan" and "Deadpool 2"), three good ones ("X-Men: First Class," "The Wolverine" and "X-Men: Apocalypse") and two stinkers ("X-Men: The Last Stand" and "X-Men Origins: Wolverine"). Considering that the most important legacy of any film series is to produce watchable films, the fact that only two of the 11 released "X-Men" movies are downright bad is a huge credit to the franchise. The Marvel Cinematic Universe will have a high bar to reach if it wants to prove itself worthy of the series that's about to close, regardless of whether "X-Men: Dark Phoenix" sticks the landing as the effective series finale.

Yet even if the Marvel Cinematic Universe does manage to do justice to the X-Men characters, it will never be able to repeat what that series meant to the history of the superhero film genre. The first "X-Men" showed that superhero movies could be profitable again, before Sam Raimi's "Spider-Man" sent that same message in 2002; "X-Men" and its worthier successors in the series showed that superhero movies could address complex social and political issues in an intelligent way, long before the "Dark Knight" trilogy or "Black Panther" did the same thing; and, before "The Avengers" proved that you could take standalone superhero movies and turn them into a cinematic universe, the "X-Men" series created a whole universe of superheroes right from the get-go, and never hesitated to put them in the same story and have them compete for screen time.

The "X-Men" series wasn't perfect, but in its nearly two-decades of existence it forever changed the film industry while producing a number of entertaining, thought-provoking and endlessly rewatchable movies. When "X-Men: Dark Phoenix" closes their story this week, it will indeed by the end of an era — yet another one to bow out in the year 2019.