"Game of Thrones" in the year of the pop culture apocalypse: What happens next?

It's "Endgame" all around us, from "Game of Thrones" ending to Skywalker series concluding for "Star Wars" 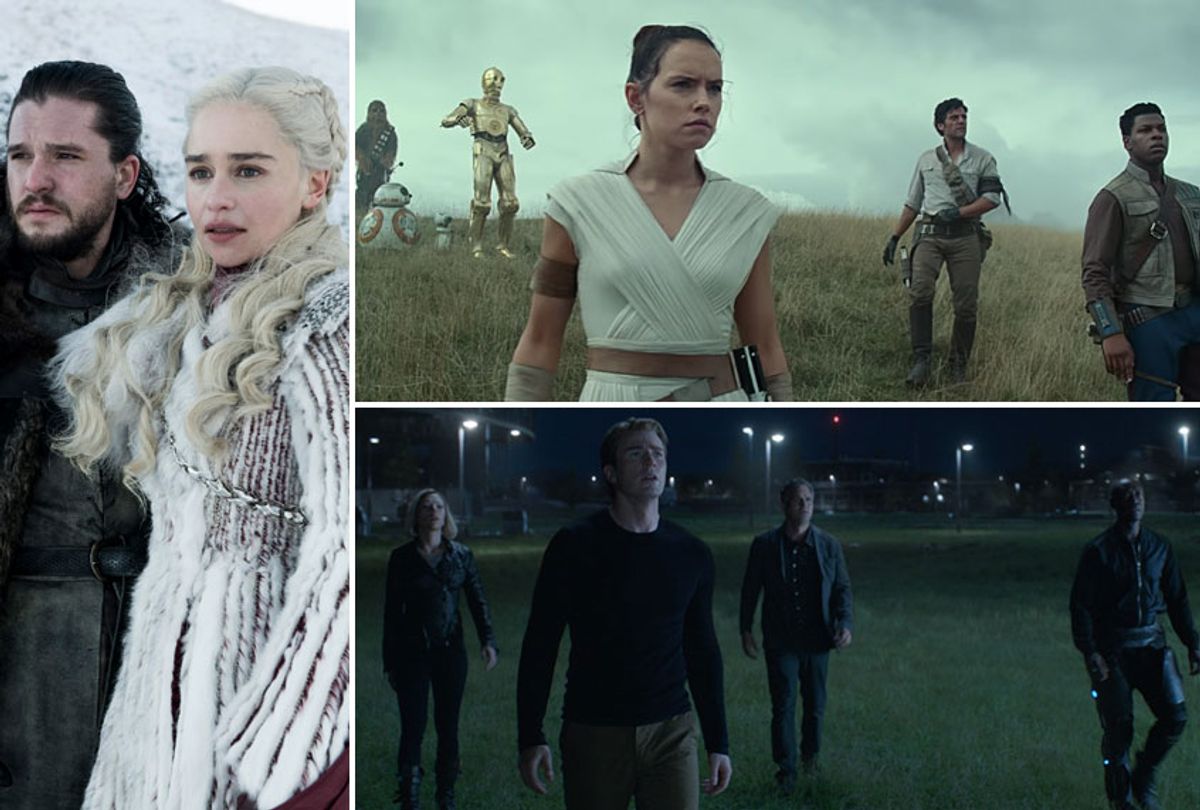 Steel yourselves, for the end is nigh. You know this. You’ve sensed it, but even more likely, you’ve absorbed some of the explosive hype rolling up to the eighth and final season of “Game of Thrones,” premiering Sunday at 9 p.m. on HBO.

The finale season’s arrival was always going to be bittersweet, our hearts divided between excitement over seeing new episodes after a two-year drought and the pang of knowing that after these new installments, there will be no more.

And this isn’t the only source of our mourning, either. Other than the Night King, Sandor Clegane and Qyburn, the core company of characters heading into the Great War consists of those we either like or we really, really like. The number of characters meriting memorable send-offs is greater than six, so we can pretty much count on groups of them going out hard and heartlessly each week.

This difficult suspicion drives the various betting pools and the stacks of written theories feeding that industry. Second to that, of course, are the early eulogies to the curtain closing on the stories celebrated in George R.R. Martin’s “A Song of Ice and Fire” novels.

As the Dothraki women are so fond of saying, all this is known. However, widening your focus beyond the horizon where the Long Night looms could make a genre-lover consider taking to their bed with depression.

It’s not just “Game of Thrones” that’s ending. Two weeks after our window view of Westeros resumes comes the arrival of “Avengers: Endgame,” the 22nd film that closes the entire Infinity Saga chapter that the Marvel Cinematic Universe has been building toward since 2008’s “Iron Man.”

And on the Friday prior to the finale kick-off of “Game of Thrones,” Disney released a new trailer for the ninth and final film in the Skywalker-centered “Star Wars” series George Lucas first introduced in 1977.

An era in genre storytelling is coming to a close in 2019, one that produced “Game of Thrones.” However, I wonder whether we’re also looking at the beginning of a new era that is in part shaped by Martin’s vision.

“Game of Thrones” is a global phenomenon filmed in multiple countries, employing a gargantuan production roster and cast. Many pop culture experts have posited, and rightly so, that “Game of Thrones” may be the last great series large swaths of humanity watch together. That’s a fairly solid prediction, given how quickly the entertainment landscape is fracturing between linear, over-the-air broadcast and streaming. Surely few to come in its wake will have access to the budgets spent to make direwolves and dragons look like living creatures.

But I don’t ultimately think this drama's end means those of us alive now won’t see its like again. Nobody could have predicted its existence in 2007, when “The Sopranos” aired its final episode. That series, by the way, was heralded by The New Yorker’s David Remnick as “the greatest achievement in the history of television.”

Then again this preceded the fevered religiosity that coalesced around “Breaking Bad” which, by its end in 2013, was also declared to be one of the greatest, if not the greatest, TV series in the history of television. There’s always room for greater versions of greatness, and its entirely probable that the world will gather around some other epic yet to be written, told stupendously on TV or in film.

Besides, the “Game of Thrones” franchise isn’t in any more danger of going away entirely than the “Star Wars” universe is. Marvel has an extensive catalogue of characters to anoint as the next generation of Avengers; it’s also doing its damndest to make the X-Men cool again.

Having said all that, as exciting as the more inclusive casting and writers’ room of the “Thrones” spinoff appears to be in its nascent stages, and as geek-gasmic as the upcoming “Star Wars” TV spinoff “The Mandalorian” may sound, concerns about the ability of these upcoming titles to recapture wildfire in a bottle aren’t unwarranted.

Jackson’s “Lord of the Rings” series remains a classic. His three-part version of “The Hobbit,” less so. Amazon reportedly coughed up $250 million to secure the rights to “The Lord of the Rings," to be realized as TV series, set thousands of years before the “Fellowship” storyline during what’s known as the Age of Númenor. We’ll see if the prequel-to-a-prequel fares better.

That’s just the business part of these finale considerations. A broader unknown is whether 2019 or 2020 may one day be looked upon as a turning point in cultural myth-building, as the years when we decided, en masse, that a saga does not have to end in peace and light so long as the ending rings true.

Mind you, we’re not going to see this darkness show up in the Marvel Universe, at least not in the near post-Thanos future. A trailer for the next installment in the “Spider-Man” franchise is running already, and we also know “Black Panther 2” is happening. No spoiler alert needed: obviously the mass Avenger team-up finds a way to set the universe right again.

And if "Endgame" marks the close of the Marvel stories begun by Captain America, Thor and Iron Man, as is widely assumed, there’s no way any of these stories will let the end credits roll without tossing in some ray of hope to keep people going. This holds true even if Steve Rogers, the Eagle Scout in this universe, dies, as many believe will happen.

Similarly “The Rise of Skywalker,” the ninth and final episode of the “Star Wars” saga, is likely to follow the predictable victory/defeat/against-all-odds comeback triptych structure that has steered the franchise since its chronological beginning.  Whatever its very few remaining heroes call themselves now, they will find a way to take back the galaxy against evil. That is what “Star Wars” fans expect, because that is what humans have expected of every myth that doesn’t involve some version of apocalypse since time immemorial.

But the real world doesn’t work that way. The world we know in 2019 tells us that when it comes to attaining power, kindness does not cut it. And that notion didn’t kick off in the modern era, either.  It has been central to Martin’s plots since his first book in the series came out in 1996. David Benioff and D.B. Weiss merely picked up concept and permeated each season with this guiding concept.

From the start Martin’s books diametrically opposed the sort of neat denouements C.S. Lewis and J.R.R. Tolkien traded in. It’s as if he read the Hollywood summary of Joseph Campbell’s “The Hero with A Thousand Faces,” and decided to concurrently follow and deviate from the portions of the monomyth that dictate the good guys must get back up after being knocked down and achieve victory in the end.

Thus, when the morally upstanding, honor-bound Ned Stark dies in Season 1 — the guy on the poster, in case your memory needs jogging — that shifted our comprehension of how these stories are supposed to play out. Television has been lousy with dramas peddling the idea that no character is safe even before “24” became a watercooler hit.

The difference with “Game of Thrones,” however, is that when a “good guy” like Ned or his lady wife Catelyn die, or when his successor to Winterfell Robb proves to be a legend in the battlefield only to be slain at a wedding reception, the audience understands why these deaths occurred. The concept of good means nothing in Westeros or Essos unless you have power and ruthlessness to back it up.

A pop culture cult has risen around Daenerys Targaryen, but never forget her Westeros debut was an ambush of fire and blood in which the survivors were given the choice to follow her and be free, or be roasted alive by Drogon.

If “Star Wars” raised several generations of genre consumers, training them to count on A New Hope and delivering such inheritors as the Harry Potter books and films and Peter Jackson’s “Lord of the Rings” trilogy, what stories might emerge in the wake of Martin’s TV vision, brought to us by way of Benioff and Weiss? A vision, we should add, that unfurled over a decade that saw illusions of hope and change and forward movement shattered by the hammers of nativism, extreme economic disparity and world leadership that prioritizes cruelty over equity?

Mind you, who ends up on the Iron Throne at the end of it all may invalidate this question . . . somewhat. None of the good guys left in Westeros have clean hands. Jaime Lannister’s change of heart comes after years of sibling sex and, as we saw in the series debut, an act of love that involved pushing a child out the window of a very high tower. Arya Stark is an icon of female power and survival. She’s also been killing people since she was a tween.

But HBO’s TV series, along with "Avengers: Endgame" and "The Rise of Skywalker," are coming to us at the end of an age that has sustained our imagination with tales of magic existing in the world of the mundane as epitomized by the “Harry Potter” series. In many homes J.K. Rowling's books share shelf space with chronicles of terrible futures wrought by ecological degradation and greed, as in Suzanne Collins' “The Hunger Games.” Dark as each of these books series could be, if light didn’t eventually prevail . . . well,  they never would have become cinematic hits. Nobody wants to invest in a multi-part saga that leaves us moping as we exit the theater.

And that, I suppose, increases the odds that the Night King will ultimately be defeated. But who is to say that last person standing won’t be Cersei Lannister? And if she does live to maintain her hold on the land, who would question her right to rule? Remember Cersei famously uttered the rules of combat to Ned Stark in the first season: "When you play the game of thrones, you win or you die. There is no middle ground." And we are alive in a time very much like this, an era defined by winning — so much winning, we’ve gotten sick of it — where the center does not exist, the center is for losers.

Tomorrow’s myth-creators are absorbing all of this information right now and distilling it into new tales, even if only in the depths of their imagination.

One of them is going to inspire the next greatest TV series of all time.