Trump is no isolationist. He wants the U.S. to dominate the globe and everyone else to grovel. It won't end well 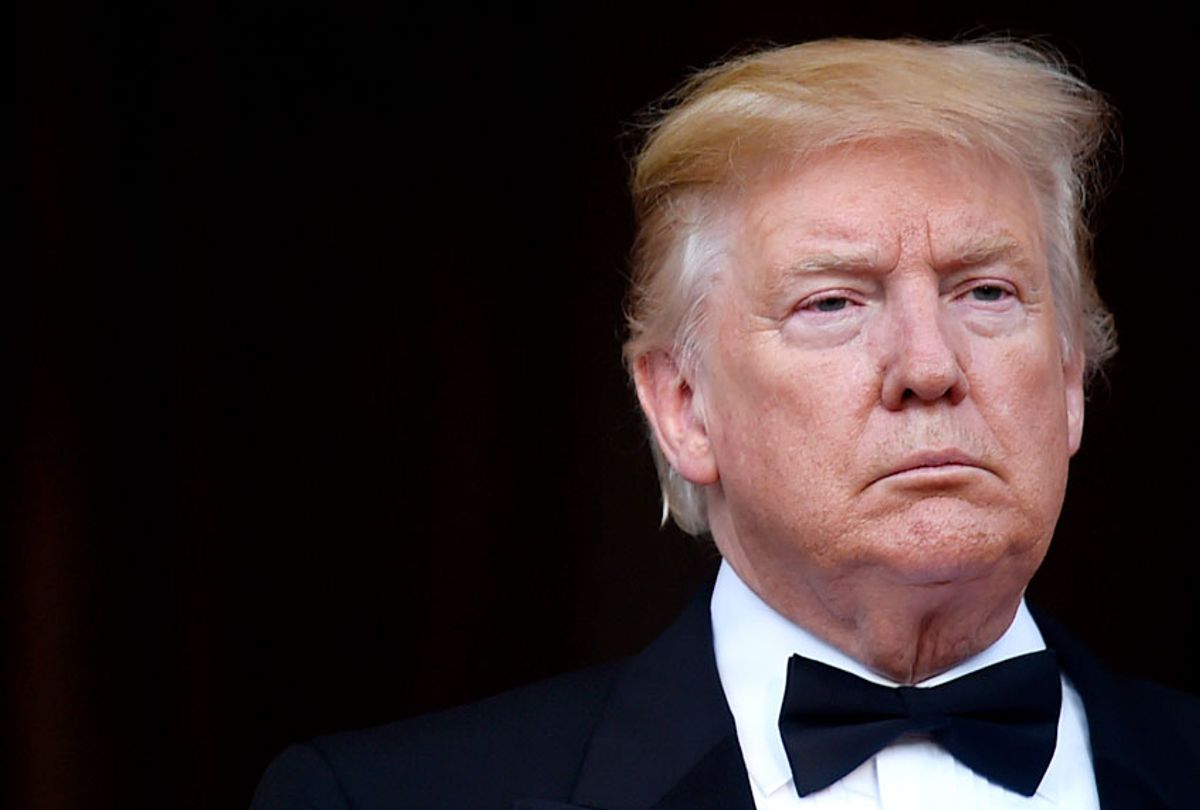 President Donald Trump poses ahead of a dinner at Winfield House for Prince Charles, Prince of Wales and Camilla, Duchess of Cornwall, during their state visit on June 04, 2019 in London, England. (Getty/Peter Summers)
--

According to the New York Times, Donald Trump had never visited the Normandy beaches before Thursday's commemoration of the 75th anniversary of the D-Day landings, and he responded with what they characterized as "almost childlike wonder." The following comment illustrates that fact:

Despite Trump's claim to have read about "Normandy," it's pretty clear that he learned everything he knows about the battle from the speech he had woodenly delivered at the ceremony earlier that morning.

It wasn't a bad speech and since Trump was able to get through it without ad-libbing something stupid, it came off all right. But for those who actually knew something about D-Day and the alliance that came together at great sacrifice to make it happen, it was a melancholy moment. Trump paid tepid lip service to the Allies but mostly related stories of U.S. soldiers' bravery and talked about America being great. As the Times put it, "it fell to President Emmanuel Macron of France to defend the postwar international order." Or as Times writer Nicolas Confessore said on MSNBC, it was "a requiem for the alliances that won WorldWar II."

Trump's speechwriters were trying to make his worldview fit the moment. It didn't work, as none of Trump's speeches have worked. Because Trump's worldview is crude and disjointed (and because he is mercurial and frighteningly ignorant) they have never been able to adequately define a "Trump Doctrine," at least in a way that would be palatable to the public. But he does have one.

Way back in the spring of 2016, Trump gave a wide-ranging interview with the New York Times on foreign policy. I don't think many people read it or if they did, they didn't take it seriously. I wrote about it here on Salon because it sent chills down my spine and it was already clear there was a realistic chance this man could become president.

By that time everyone knew about his love of torture and bombing and seizing resources from countries we had "liberated." Yet, for some reason, perhaps because he was using the old isolationist slogan "America First" (which he thought he'd made up himself) and he lied about having been against the war in Iraq, people thought he was some kind of humble nationalist, looking to withdraw from global obligations and bring all that money home to focus on hard-working Americans for a change.

He did say things like that. But those words never squared with his bullying temperament and otherwise bellicose rhetoric.

When Trump says he wants to make America great again, he is thinking of his childhood in the post-World War II years, when America was the only industrialized nation left standing after the destruction wreaked by the two world wars in the first part of the century. Since he has no sense of history and no knowledge of how that came to pass, he believes that the post-war world order was created by other countries seeking to exploit the United States. He does not understand that having finally learned the terrible lessons from the mess left behind after the uneasy peace at the end of World War I, the U.S. later led the way in creating institutions that would encourage interdependency and trust among its allies and trading partners so that nothing like that could ever happen again.

In his lifetime he's seen the rest of the world rebuild and prosper and doesn't understand that was always the plan. And he doesn't seem to recognize that the U.S. got tremendously richer and more powerful at the same time.  He believes the world owes America money for helping it rebuild itself. He has said that in dozens of different ways, from hectoring the allies to complaining that Iraq hasn't paid us back for invading them and wrecking their country.

Now Trump's trade war has begun and he's planning to show the rest of the world who's boss. Here's how he put it in that Times interview in 2016 when talking about China building islands in the South China Sea as a military fortress to control valuable shipping lanes.

David E. Sanger: So you would cut into trade in return —

Trump: No, I would use trade to negotiate.

It's not just a bargaining chip. It's a weapon. Trump has declared economic war on  China. And now he has declared economic war on  Mexico with tariffs designed to force that nation to do something that's impossible. Just in the last week he's hit India and has even talked seriously about tariffs on Australia. He has made clear to America's allies from Japan to Europe that he will be economically ruthless with them as well unless they start paying tribute to the United States.

Does any of that sound like isolationism? It is not. It's crude economic imperialism — with the world's most powerful armed forces to back it up if necessary. He doesn't have to make that threat explicit. He just has to mention over and over again that the U.S. is spending vast sums on a military build-up for no obvious reason.

Trump's talk of nationalism and sovereignty is not what people think it is. It's nationalism for thee but not for me. It's American sovereignty but "my way or the highway" for everyone else. Trump wants to see the U.S. dominate the world economically the way it did when he was a little boy. In his mind, it's "unfair" that other countries have a say. In the zero-sum way he views all "deals," whether in real estate or politics, it's not enough for the U.S. to win. Everyone else must also lose.

This is how real wars start.  It's happened before. It was years of such arrogance and demand for dominance that led to the horrors Trump just learned about at the Normandy beaches on Thursday. Only this time, the United States of America is the aggressor.