"Is this worse than Joe McCarthy? They are destroying any adherence to our constitution," Giuliani asks on Twitter 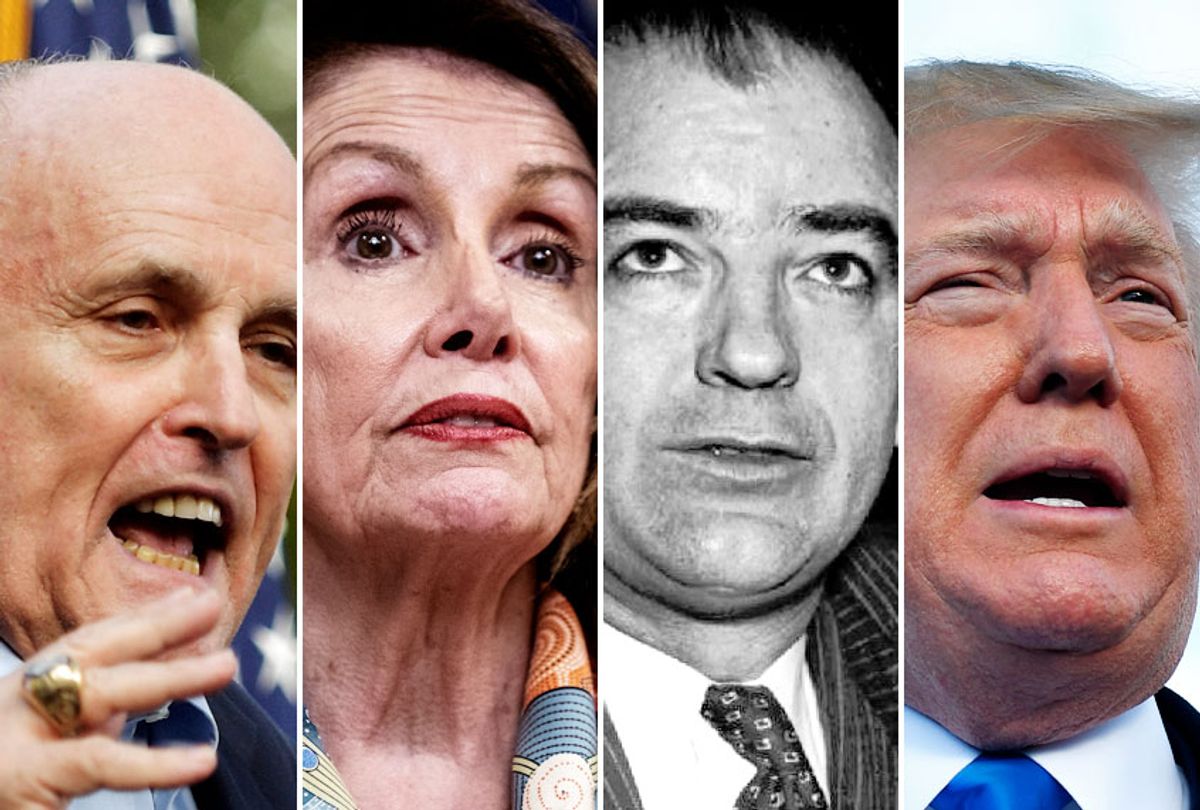 "Pelosi wants to see @realDonaldTrump in prison. She doesn’t have a particular crime in mind just prison. If you can’t see she’s over the top, if not over the Hill, you are blinded by partisanship or hatred," Giuliani wrote a tweet Sunday.

In a second tweet, he later added: "Pelosi said @realDonaldTrump should go to prison. But she said nothing about a trial or a jury or a presumption of innnocence. Is this worse than Joe McCarthy? They are destroying any adherence to our constitution. And the Fake News failure to hold them accountable is corrupt."

There has been considerable controversy within the Democratic Party over Pelosi's reluctance to begin an impeachment inquiry. On the one hand, there is a political logic to her decision: While the Democrats control the House of Representatives, which alone can impeach the president, the Senate alone can convict the president — and to do that, two-thirds of the members have to vote in favor of conviction. Not only do Republicans control the Senate, but they have 53 seats to 47 for the Democrats, which includes independent Sens. Angus King of Maine and Bernie Sanders of Vermont, who both caucus with the party. As a result, 20 Republican senators would have to break from the party and vote to convict Trump for him to be removed from office — an unlikely, though not impossible, prospect.

"Nancy Pelosi seems to think that some history would celebrate not Catherine the Great, but Catherine the Faint-hearted," American University political historian Allan Lichtman told Salon last month. "She is leading the Democrats down the primrose path of playing not to lose, of being timid, of being afraid, the path that has always caused the Democrats to lose. This is a truly turning-point historic moment in the history of the United States."

He added, "We now have a rogue president. Absolutely right about that, but we have a rogue president who cannot be checked by what Nancy Pelosi is proposing. The only way to check this president is to hold him accountable, to strike at his power and his brand, and that can only be done by beginning an impeachment investigation. The argument that the House should not impeach because the Senate might not convict is constitutionally unsound, politically unsound and morally bankrupt. It is not the responsibility of the House to look into a crystal ball and try to figure out what the Senate may or may not do."

There is also an irony in Giuliani comparing Pelosi to McCarthy when it is Trump who has been suspiciously obsequious toward Russian President Vladimir Putin in his rhetoric. McCarthy was a Wisconsin senator who dominated America's political stage from 1950 to 1954 by spuriously accusing Democrats and other perceived political opponents of being Communists or having Communist ties. While there were Soviet espionage rings in the United States at that time, the problem was nowhere near as rampant as McCarthy made it out to be, and he was eventually discredited.

As former Ambassador Michael McFaul (who represented President Barack Obama in Russia) told Salon earlier this year. After noting the "ironic twist" of Republicans traditionally accusing Democrats of being pro-Russia back in the days when that nation was Communist, he pointed out that both Trump and Putin are "kind of a self-styled conservative, self-styled nationalist, anti-multilateralist, kind of 'nation-state should come first.'"

He added, "I think that ideological affinity is also something that's radically new in the era that we live in, not unlike the intellectual affinities that you had from people on the left with communist organizations and communist countries during the Cold War."