Amanda Knox returns to Italy with a message: "Stop consuming such irresponsible media" 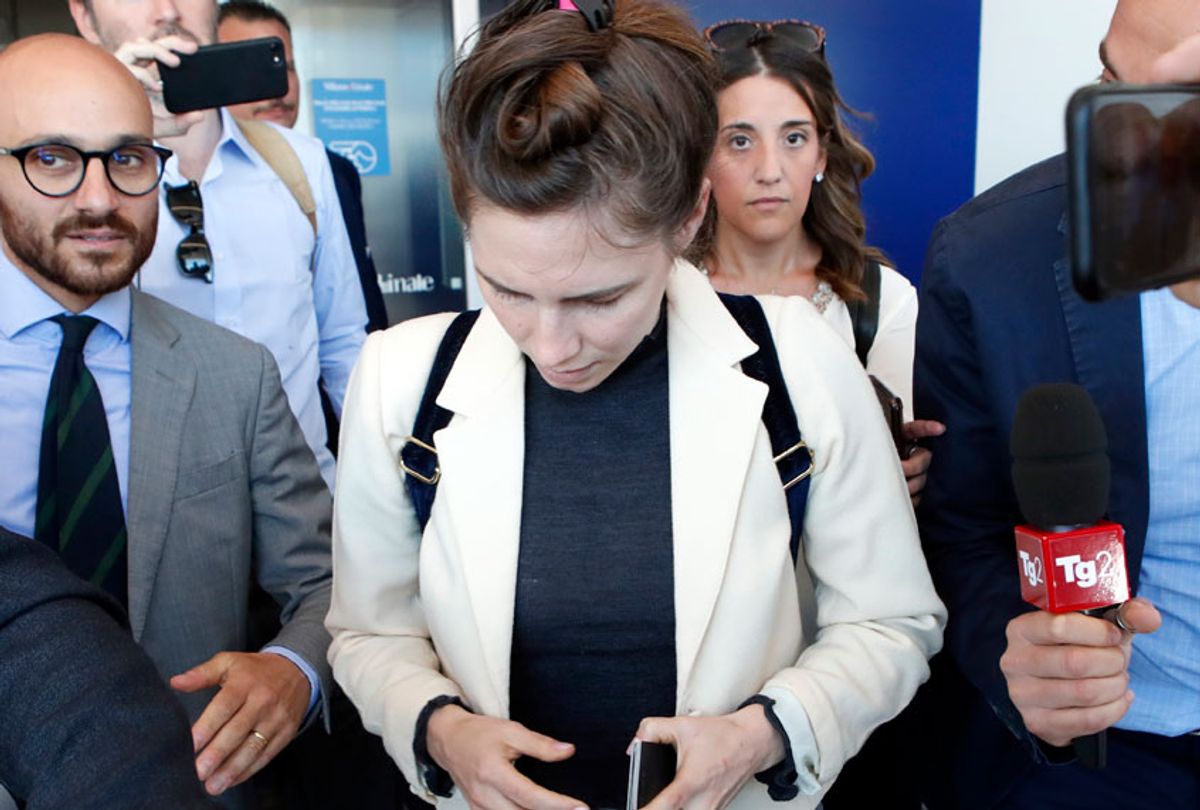 Amanda Knox, the American woman who spent almost four years in an Italian prison for a murder for which she was later acquitted, revealed she was prepared herself "to grow old in prison" in a poignant essay published in advance of her return to the European nation.

"I've had more than my fair share of surreal moments. You probably know the obvious ones. The moment an Italian court declared me guilty of a murder I didn’t commit was mind-breaking. Up until that instant, I thought my innocence was a guarantee of my freedom. I was wrong. The moment I was acquitted was just as insane. I had prepared myself to grow old in prison. I’d forgotten what it was like to walk on grass," Knox wrote at the beginning of the essay, which was released Wednesday on Medium.

After recalling the 2016 Netflix documentary about her case and her dismay that the words "monster" and "victim" were juxtaposed near her image in order to promote the film, Knox discussed the hardships of adjusting to life as a free woman in a culture where people devour one another on the Internet.

During my first years as a free woman, I remained very private. I had Facebook and Instagram accounts that no one but a small circle of my friends and family could follow. I knew what would happen if I made them public. Haters and trolls would harass me or call me a killer or psycho bitch when I posted a picture of my cat. The tabloids would lift my photos out of context and call me strange, as if I were so weird that I deserved four years in prison. And that’s exactly what happened when I made my Instagram public. I did so because I just wanted to have what every other person around me had, the freedom to shout into the wind and say, “Here I am!” The freedom to strike up an unexpected conversation with a friendly digital stranger. I have that now, but for me, it comes with the cost of absorbing insults and hatred and having my life fed into the content machine that seems endlessly hungry, especially now that I’m going back to Italy.

Knox opened up about the difficulty of reclaiming her identity and urged the media to behave responsibly, writing at one point that "someone’s life may make a great story, but it’s still their life. And as a journalist myself, I feel a moral duty to respect that." Knox then remembered the brutal treatment she received at the hands of the Italian media.

While on trial for a murder I didn’t commit, my prosecutor painted me as a sex-crazed femme fatale, and the media profited for years by sensationalizing an already sensational and utterly unjustified story. It’s on us to stop making and stop consuming such irresponsible media.

Knox also covered the new season of her Sundance AMC podcast, "The Truth About True Crime," which focuses on Jens Soering in "a case that has haunting echoes of my own — the brutality of the killing, the police screwups, a foreign exchange student accused, the young lovers as suspects, the questionable forensics, the media spectacle — and yet Jens has been in prison since before I was born."

She added, "I can’t help but see him as the version of me who was never freed" and urged her readers to push for "a more open-minded and compassionate decision in his upcoming pardon petition."

Knox touched down in Italy Thursday, marking her first return to the European nation since she was released from prison in 2011. According to NBC News, she was "swarmed by media" after arriving at the Linate Airport in Milan. She is set to speak on a panel titled, "Trial by Media," at a criminal justice festival organized by the Italy Innocent Project.