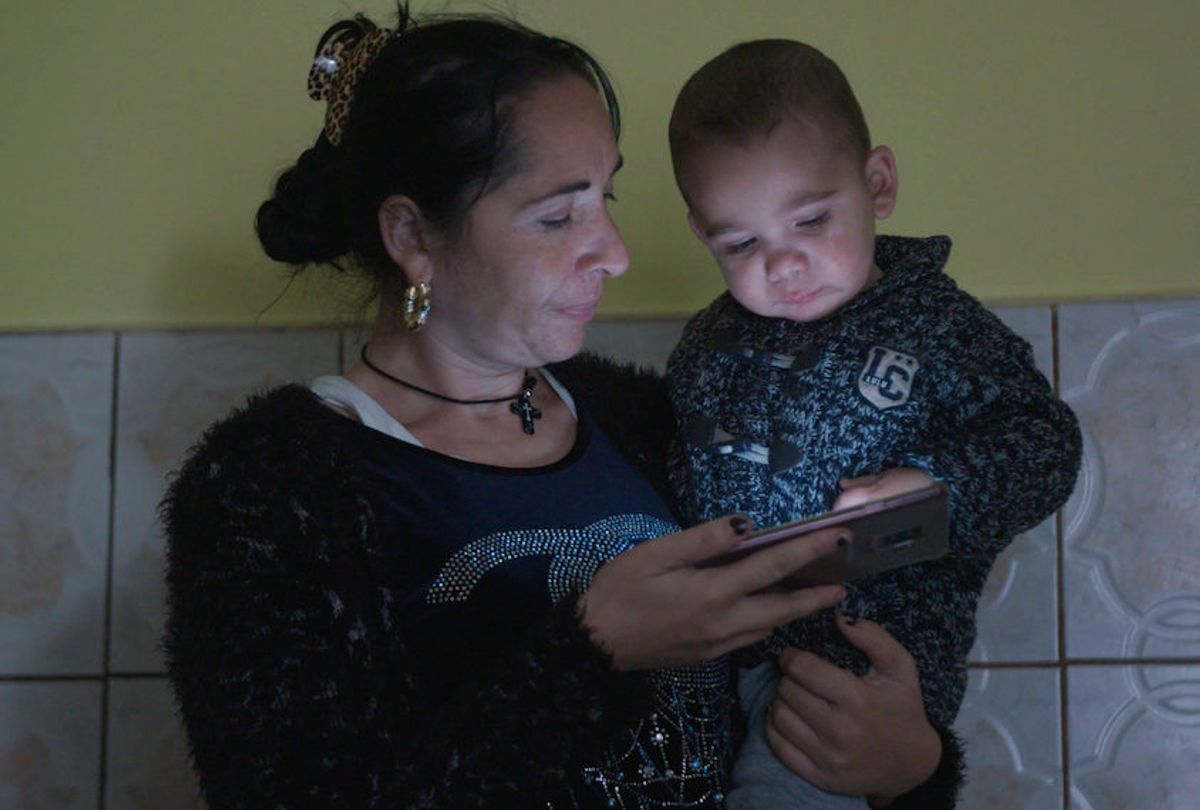 Florentina Patru and Constantin Mutu on FX's "The Weekly" (FX)
--

“Baby Constantin,” the third episode of the New York Times’ FX series “The Weekly,” is a thought-provoking examination of the Trump administration’s flawed and cruel “zero-tolerance” border policy that also doubles as a case study of the journalistic medium at this juncture. Times immigration reporter Caitlin Dickerson guides viewers through the heart-wrenching story of Vasile and Florentina Mutu, a couple that sought asylum in the United States. The Mutus are Roma, members of a persecuted minority in Europe, and in a heartbreaking moment Vasile explains that he and Florentina wanted to immigrate to America because he heard there is no racism here.

Their four-month-old infant Constantin became the youngest known child to be separated from his parents at the U.S.-Mexico border.

Dickerson, who has been at the forefront of news coverage about the administration’s changes in deportation and detention policy since she joined The Times’ staff in 2016, first uncovered details on Constantin’s story in court documents she came across in June 2018.

Constantin was taken away from Vasile when his father crossed into Texas and was apprehended by border agents. The baby was sent to Michigan to live with a foster family while Vasile, who requested asylum, was locked away in a detention facility and eventually deported to Romania without any indication that he or his wife would see Constantin again.

The infant would spend five months of his life away from his family, one child among thousands separated from their parents under the administration’s immigration policy.

“This particular baby and his family, their story serves as a reminder that the big national debate over immigration is really a debate about people,” series’ executive producer and Times assistant managing editor Sam Dolnick told Salon in a phone interview. “In this overheated political climate, that can get lost.”

Dolnick added, “Even the best writer — and Caitlin's a beautiful writer — can't quite compete with the power of spending time with this baby's face. And I think that the visual medium is the most powerful way to communicate a story like that.”

“The Weekly,” which debuted on June 2 and airs Sundays at 10 p.m. on FX, is still solidifying its identity. Its first two episodes are a mixture of process examination and storytelling, while by necessity “Baby Constantin” is a story-forward half-hour with Dickerson only appearing around the periphery in addition to narrating the report.

“Baby Constantin” also is the inaugural instance of “The Weekly” breaking a New York Times story prior to publication; Dickerson’s full report publishes on the Times website after the episode debuts on FX, with the print version following Monday morning, the same day the episode becomes available to stream on Hulu.

“I think the newsroom has gotten to a place where we think about stories that appear in the newspaper and on our podcasts, on television and in videos that go up on the website similarly, in that they're all discrete stories that require the same high level of vetting and scrutiny and you know, all the way through the production and editing process, all the way up to the publication,” Dickerson told Salon.

And this the latest demonstration of a legacy publication expanding into TV, carving out its corner in a space being claimed by docuseries and online outlets dabbling in the daily and weekly television series format.

“The kind of ‘voice of God’ news style has, I think, fallen out of favor,” Dolnick said. “The notion of a person from behind the desk in a studio saying ‘this is how the world works' probably is connecting with fewer people than it has before.”

Dolnick envisions “The Weekly” as a means of “[cutting] through the middleman to hopefully bring the urgency of the stories, but also their humanity and the immediacy, to the audience without passing through the institutional language of our traditional way of telling stories.”

Dickerson deftly uses Constantin’s story to elucidate the human side of the immigrant debate, a bitterly partisan argument a large segment of America views in the abstract. One notable aspect about this story is that it does not feature a child from one of the Central American countries frequently denigrated by the Trump administration. The Mutus are European, challenging assumptions about where migrants at the U.S. southern border are coming from.

The Times did not intentionally cast this episode or the story with this in mind, by the way.  Long before she found Constantin, Dickerson’s primary objective was to locate the youngest child removed from parental custody as a result of Trump's border policy.

But when I asked about whether Constantin’s nationality figured into the story being developed into an episode of “The Weekly” or where it’s simply a matter of coincidence, Dickerson responded, “It is a coincidence, and it isn't. Because if you follow immigration closely like I do, and like I have or many years now, you know that United States has always drawn people from all over the world … the vast majority of people who are affected by family separation were from Central America. I wrote lots of stories about them and continue to write lots of stories about them.

She continued, “But I was actually a lot less surprised that the child we focus on in the story is from Romania than others were. Because even though it's rare, we do have a steady flow of Roma people coming to the United States to seek asylum, and we have for years. But as we say in the story, we wrote about him because he was the youngest child.”

Within its half-hour run time “Baby Constantin” references several previously published pieces in which Dickerson broke new developments in the overall immigration policy story, in addition to featuring new reporting, including conversations with Vasile and Florentina conducted and filmed in their small home in Romania.

But the moment that sticks in the mind after its end credits is one simple but powerful image that no writer, regardless of her descriptive skill, could adequately convey in prose. Dickerson also interviews the couple that fostered Constantin during his five-month ordeal, following a great deal of persuasion, on the condition that producers withhold their identities.

While their faces are blurred, the hands of Constantin’s foster mother remain in focus. And they more than adequately express the sorrow the couple endured at knowing they were caring for the infant of parents that did not voluntarily give him up, that they were witnessing the small developmental landmarks that should have been Constantin’s mother's and father's to treasure.

Describing the experience of relinquishing Constantin at the end of the Mutus’ ordeal, the woman's hands clench and even seem to redden as she talks about the baby reaching for her while she hid behind immigration officers, hoping to ease Florentina's and Vasile's reunion with their son.

“I just stood behind the immigration officers and cried,” she says.

The New York Times is by no means new to TV or, for that matter, other methods of storytelling.

A little over a year ago the paper allowed filmmaker Liz Garbus and her crew to embed themselves in its newsroom to capture 16 months of covering Trump, starting on the first official day his term began. The result is Showtime’s docuseries “The Fourth Estate,” which was much more about the Times’ reporters and the paper’s journalistic process than the stories it produces.

Long before that the paper’s website became one of the first to push its story presentation into new areas, employing interactive features in its reporting, including film snippets, sleekly edited slide shows and interactive transcripts. All of this is common practice now, but the Times earned a Peabody Award for innovating in that space 11 years ago, in 2008.

It has since refined its online presence even more and, like many other publications, integrated a podcast component, “The Daily,” into the newsroom’s production schedule. Only now, both “The Daily” and “The Weekly” are at best keeping up with online outlets including Vox Media, BuzzFeed, Vice Media and Axios, all upstarts compared to the venerable Gray Lady. But their various TV efforts have had mixed results.

Last year online news outlet Axios (which in its statement of purpose places consumers on the same level as advertisers) forged an agreement with HBO allowing the premium channel to debut its news specials. Thus far its “Axios on HBO” specials have been anchored by interviews with the likes of Donald Trump or Jared Kushner, which the site teases by releasing snippets designed to outrage and inspire hot takes.

In other words, both legacy media organizations and journalism start-ups are still figuring out what viewers want in a modern news TV series. And even if the Times figures it out first, there’s still no guarantee that these efforts will move the needle on policy changes more effectively than Dickerson’s previous coverage already has.

“No matter how well I write my stories and no matter how hard I tried to make them interesting or accessible, there are many people for whom picking up the newspaper just doesn't fit into their day and isn't the way that they want to consume news,” Dickerson concedes. “They watch television. And so it's really exciting for me to be able to reach them.”