President Trump's 2020 campaign kickoff was a huge throwback to 2016

Trump's many attacks on Hillary Clinton prompted chants of "Lock her up!" ⁠— but his 2016 rival isn't running again 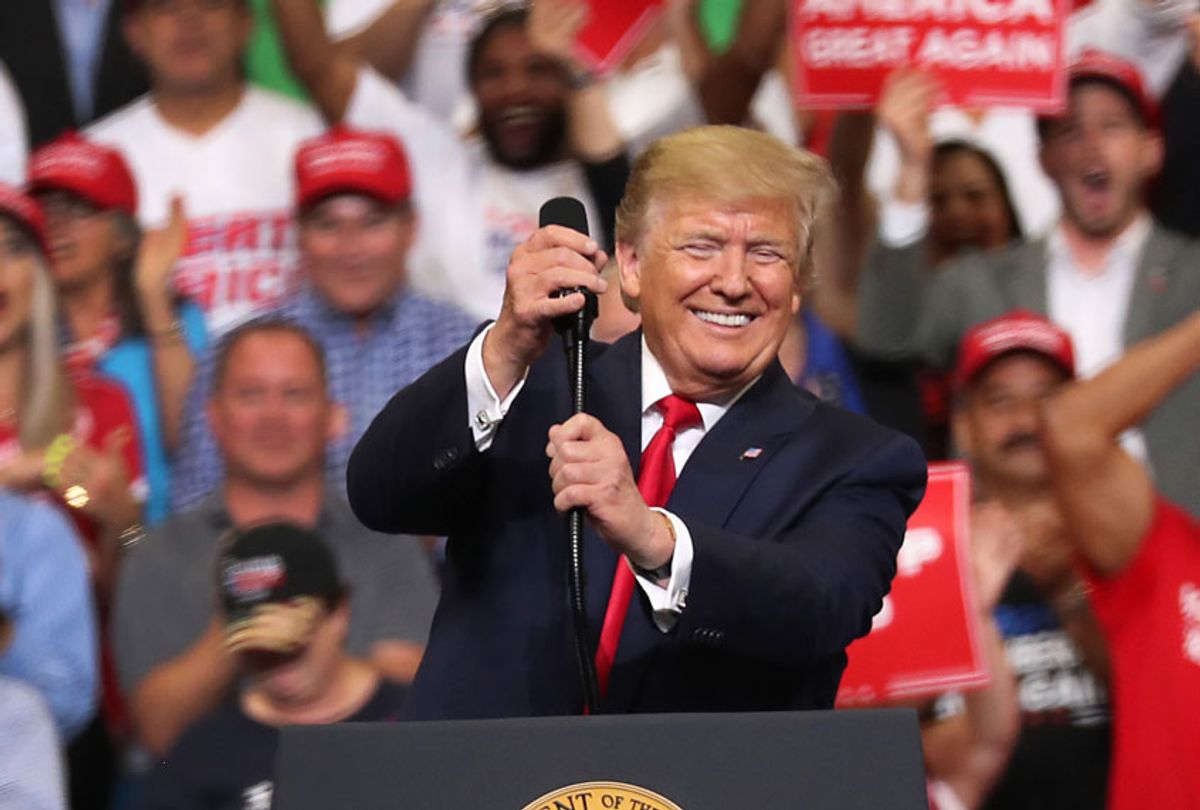 President Donald Trump announces his candidacy for a second presidential term at the Amway Center on June 18, 2019 in Orlando, Florida. (Getty/Joe Raedle)
--

President Donald Trump held a kickoff rally for his re-election campaign Tuesday in Orlando — but he seemed to be caught in a time warp.

There were a number of references in Trump's speech to former Secretary of State Hillary Clinton, who was his Democratic rival in 2016. Although Clinton is not running for president again in 2020, Trump once again re-litigated the email scandal that plagued her past candidacy. According to Trump, Clinton allegedly "destroyed evidence, deleted and acid-washed 33,000 emails, exposed classified information and turned the State Department into a pay-for-play cash machine.”

Trump also cast himself as the true the victim, at one point hypothesizing to his audience: "Can you imagine if I got a subpoena — think of this — if I got a subpoena for emails, if I deleted one email, like a love note for Melania?" According to the president, if that would have happened, it would have resulted in "the electric chair for Trump."

The president's attacks prompted the crowd to chant "Lock her up!" ⁠— a greatest hit of his 2016 rallies ⁠— on repeat.

At one point, the president denounced the investigation into alleged collusion between his 2016 campaign and Russia as "the greatest witch hunt in political history" and claimed that "the only collusion was committed by the Democrats, the fake news media and their operatives and the people who funded the phony dossier ⁠— 'Crooked Hillary Clinton' and the DNC."

Trump described the latter as "an illegal attempt to overturn the results of the election, spy on our campaign ⁠— which is what they did ⁠— and subvert our democracy." He repeatedly insisted that he had been cleared by the Mueller probe, which is not true. While the president's campaign was cleared of collusion, Mueller documented ten episodes of possible obstruction by the president himself⁠, which Democrats in the House of Representatives continue to probe. Trump further claimed that Mueller's investigation had been run by Democrats who had an agenda against his administration. Mueller, in fact, is a registered Republican.

For the most part, Trump avoided mentioning any of his prospective 2020 opponents by name, saving his swipes for Sen. Bernie Sanders of Vermont and former Vice President Joe Biden, who he derided with his epithet "Sleepy Joe". The president did, however, claim that his Democratic opponents posed an existential threat to the way of life of his supporters. "Our political opponents look down with hatred on our values and with utter disdain for the people whose lives they want to run," Trump told the audience.

At another point in the rally, Trump claimed that Democrats had "tried to erase your vote, erase your legacy of the greatest campaign — probably the greatest election in the history of our country."

"The only thing these corrupt politicians will understand is an earthquake at the ballot box," the president added. "We did it once, now we’re going to do it again ⁠— and this time we’re going to finish the job."

Trump also singled out the issue of illegal immigration, which became a rallying cry on the very day he launched his first presidential bid back on June 16, 2015.

Flash forward, in addition to saying that "the Democrat agenda of open borders is morally reprehensible," Trump vowed Tuesday to stem the tide of illegal immigration, protect American jobs and fight violent crime like gang activity, which he linked to undocumented immigration.

Long before the president had even taken to the podium in Florida, the editorial board of the Orlando Sentinel announced its endorsement for 2020 ⁠— anyone but Trump:

Donald Trump is in Orlando to announce the kickoff of his re-election campaign.

We’re here to announce our endorsement for president in 2020, or, at least, who we’re not endorsing: Donald Trump.

Some readers will wonder how we could possibly eliminate a candidate so far before an election, and before knowing the identity of his opponent.

Because there’s no point pretending we would ever recommend that readers vote for Trump.

You can watch Trump's rally here: