Patrick Shanahan lasted six months, and was never confirmed. At some point Trump's entire Cabinet will be "acting" 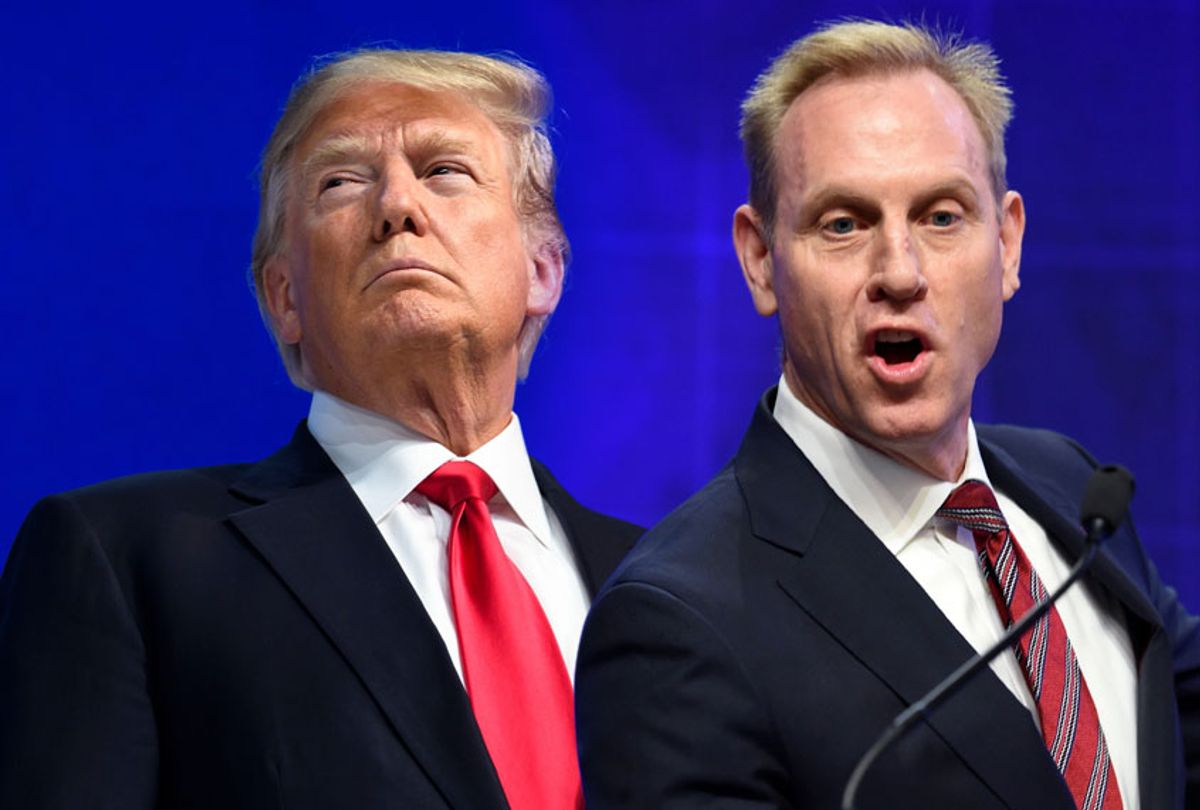 After months of ducking cameras and avoiding public accountability as the U.S. ramps up its aggressive military posture towards Iran, President Trump’s acting secretary of defense, Patrick Shanahan, invited a pair of Washington Post reporters into his apartment for an in-depth interview. Just before the story published on Tuesday, however, Trump took to Twitter to make another major personnel announcement: Shanahan is out as the head of the Pentagon.

Shanahan was never confirmed by the Senate and served in an “acting” capacity for six months, before withdrawing his name for consideration following an extended FBI criminal background investigation that apparently revealed allegations of domestic abuse. He reportedly traveled to the White House on Tuesday to withdraw from the confirmation process. A former Boeing executive who was only recently cleared in an ethics probe over suspicions he had shown favoritism to his former employer, Shanahan was brought on by Trump as acting secretary after former Secretary Jim Mattis left the administration abruptly, following Trump's announcement that he would pull U.S. troops out of Syria over Mattis’ objections.

This new shakeup at the Pentagon comes one day after Shanahan announced that the U.S. will send 1,000 troops to the Middle East, after earlier announcing an additional 5,000 troops will be sent to the region. Shanahan was reportedly scheduled to attend a Tuesday meeting with the Defense Policy Board before his departure was announced, but curiously was not scheduled to travel to Tampa later this week to meet with U.S. Central Command (CENTCOM), the group tasked with leading military operations in the Middle East. Instead, Secretary of State Mike Pompeo, who is not in the military chain of command, will sit with those who would carry out any strikes against Iran. In fact, no Pentagon officials are expected to attend the briefing.

Shanahan’s abrupt departure is not exactly a big shock. Trump has lost more than a dozen Cabinet-level secretaries in his first two years in office. It is certainly concerning nonetheless. The administration is clearly gearing up for some sort of military confrontation with Iran and there will likely be no congressionally confirmed leader of the military to oversee the operation.

On Tuesday, Trump named Mark T. Esper, the current secretary of the Army and a former Raytheon executive, to take over for Shanahan as acting secretary. He did not say whether Esper would be nominated for the permanent position. Trump, who came into the presidency with less government experience than any commander in chief in decades, may never again confirm a secretary of defense, opting to just appoint a roster of "acting" leaders for as long as possible. anybody bothers to press him. Shanahan was on the job half a year without facing his constitutionally-mandated Senate confirmation, a situation with no apparent precedent.

This is the system Trump wants, one where he never has to bother clearing senior appointments with Congress. Key administration vacancies currently held by acting leaders include the Department of Homeland Security and the Interior Department (both Cabinet-level), along with Immigration and Customs Enforcement, the Federal Aviation Administration, the Food and Drug Administration, the Secret Service and the Federal Emergency Management Agency. There is only an acting ambassador to the United Nations, following Nikki Haley’s departure, and the Office of Management and Budget is run by a temporary director — because Mick Mulvaney left that job vacant to serve as Trump’s acting White House chief of staff.

“I like acting. It gives me more flexibility. Do you understand that?” Trump said in January. “I like acting. So we have a few that are acting. We have a great, great Cabinet.”

This should serve as an enormous red flag that the person sitting behind the Resolute desk is incompetent. But this isn't just a failure by the president, although he's primarily accountable for his nominees. Shanahan was confirmed as deputy secretary of defense by the Senate in a 92-7 vote. As the Post noted, none of the senators ever asked him about the alleged domestic violence issues that eventually stymied his confirmation as secretary of defense. (Trump told reporters he first found out about the domestic abuse allegations in Shanahan's past on Monday and defended his administration's handling of the nominee: "We have a very good vetting process.")

Even though Republicans still control the Senate, Majority Leader Mitch McConnell has apparently decided his chamber is too busy to take up its other constitutional duties. Senate Republicans reportedly told Trump they don't have time on the calendar or adequate political capital for confirmation hearings to staff Trump’s Cabinet.

“I don’t know what his rationale is, but it’s bound to create more challenges,” said Texas Sen. John Cornyn, the No. 2 Republican in the chamber. “They’re not subject to Senate confirmation when they’re in acting, and I think we need some more certainty, more predictability would be good.”

We will once again have an acting secretary of defense, and this one hasn't even been nominated for the position. The vacuum has been filled by war hawks like Pompeo and national security adviser John Bolton, both of whom publicly push towards war with Iran. So there may be a method to Trump’s madness after all. Total chaos and no one to answer for it provides the perfect environment for war.