Is Uncle Joe on cruise control, or doomed? That depends on your reading of reality, which is no longer real 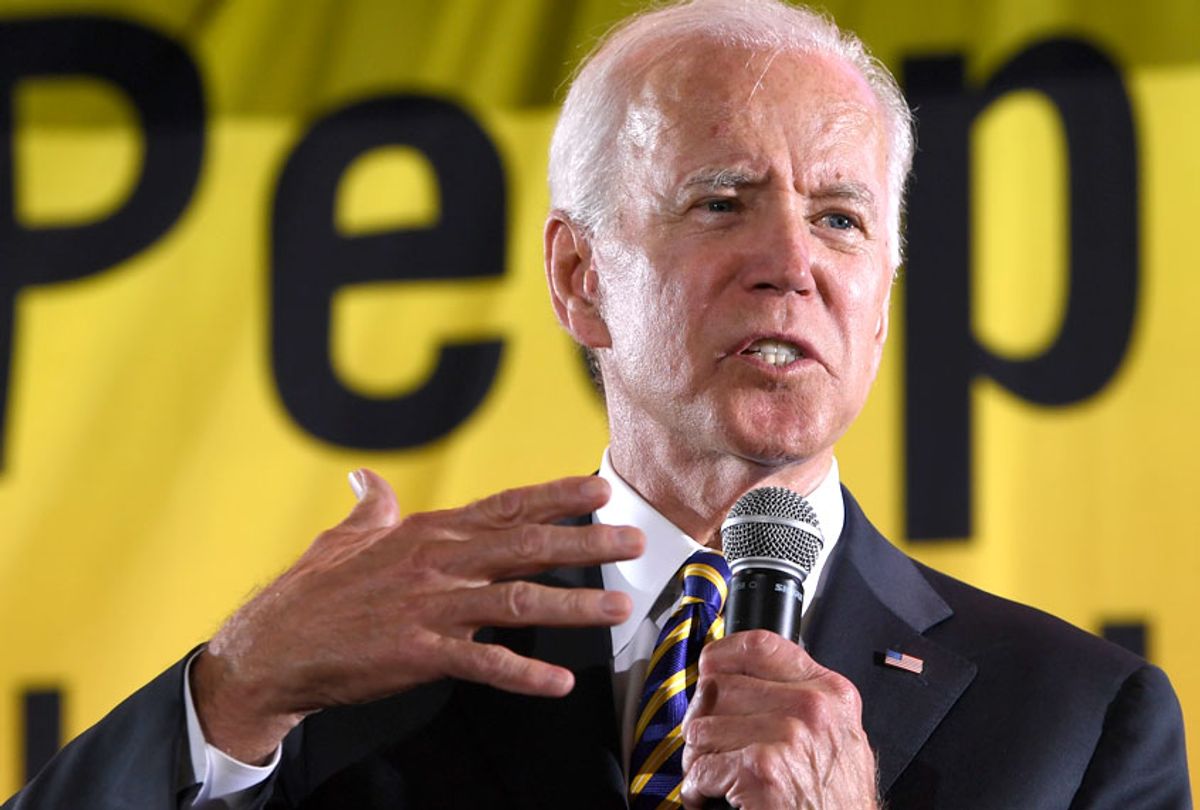 It has been a disastrously clumsy week for supposed Democratic frontrunner Joe Biden — or so it appears. (That reads like a sentence I might get to use again.) Under normal circumstances, in a normal campaign, this week might have finished him off before the race even starts. If it were a normal campaign, if anyone were really paying attention to Biden’s bewildered ideology and if anything mattered. It’s not clear any of those things is true.

Despite spending eight years in the Obama White House, Biden insisted last week that Republicans are secretly eager for constructive engagement and bipartisan legislation, and that after Donald Trump’s departure an “epiphany” will release them from demonic bondage. That sounds ludicrous but was no random misstep: It’s either what Biden actually believes or what he thinks voters want to believe. (My money’s on the latter.) In his various attempts to explain this hypothesis, he has only dug himself deeper.

Let’s assume Biden didn’t mean to praise legendary segregationist senators James O. Eastland and Herman Talmadge for their “civility,” only to point out that he was able to work with them. (It’s worth noting that those two unvarnished white supremacists were both Democrats, to the party’s everlasting shame; no “bipartisanship” was involved.) So instead of being an admission that he used to pal around with racists, it was just a badly chosen, poorly phrased and drastically mistimed anecdote about the men’s-club atmosphere of the old U.S. Senate, delivered a day before the Juneteenth commemoration honoring the end of slavery. So much better, right?

Those remarks came at the same fundraising event in New York when Biden assured his well-heeled listeners that “nothing would fundamentally change” under his prospective presidency, and that rich people’s “standard of living” would not be affected. Now, arguably that would be true even under the most onerous version of a “wealth tax” imagined by Elizabeth Warren or Bernie Sanders: No one envisions the billionaire class forced to hock the diamonds and yachts, or reduced to eating Spaghetti-O’s out of the can. But that’s not really the point.

The point is that Biden and his advisers clearly believe that none of the left-wing social media caterwauling over this stuff will stick to him, and that “regular” Democratic voters out there in the places he claims to understand — desperate for the safety of an Obama-adjacent white man who can theoretically beat Donald Trump — simply don’t care what he says or to whom. That theory may or may not be correct, but it strikes me as a funhouse-mirror reflection of Trump’s famous premise that he could shoot someone on Fifth Avenue and not lose his supporters. Biden takes a similar view of the current political landscape, through a less overtly noxious filter.

Whether you see Biden as a dominant frontrunner likely to cruise to victory or a dead man walking, soon to join the pantheon of losers alongside Jeb Bush and Joe Lieberman, depends on your understanding of political reality. Since there is no shared understanding of political reality right now — it got “disrupted,” and I don’t need to explain how or by whom — that’s a problem.

Early coverage of the 2020 Democratic campaign has veered from one extreme to the other. Each minuscule plot twist or bump in the polls is treated as potentially cataclysmic, a “game-changer” — but on the other hand we are reminded that none of it really matters, because we’re still in the pregame and at this point in 2008 or 1972 or pick-another-year, Engelbert Humperdinck seemed like a shoo-in, and look what happened to him! Both extremes make clear that this peculiar, overcrowded, likely-to-be-underwhelming contest will be unlike anything ever seen before in American politics.

Well, OK — it’s a little bit like the 2016 Republican campaign, in fairness. Which was so much fun for everyone! Especially for the people in that party who always wanted a bit more Blood and Soil mixed in with the tax cuts.

The parallels are suggestive, but not precise. Both parties appear primarily driven by fear, which is not a great look for a two-party democracy. But there’s no pro-wrestling heel or self-appointed supervillain among the Democratic candidates, and even at their dimmest and most cynical Democrats do not generally default to vicious, psychotic fantasy. Despite what many conservatives claim to believe, the appetite for a Stalinist terror state or a Cultural Revolution 2.0 within the Democratic Party’s voter coalition is exceedingly small.

Biden’s apparent calculation is that his rhetoric of moderation, conciliation and restoration will appeal to the most cautious and conservative Democratic voters, who are largely being ignored by his opponents. To speak in obnoxious generalities, those would include suburban women in the heartland states, African Americans in the South and those members of the fabled “white working class” who have soured on Trump’s false promises. Those voters, this premise holds, will either welcome Biden’s softcore bipartisan fantasies and smoochy overtures to the 1 percent, won’t notice them or simply won’t care: He’s got a D next to his name and we gotta have a white guy this time.

Is that a “winning strategy”? I have no idea, and I don’t think anyone else does either. I guess we’ll find out, because here’s another contradiction — and another eerie parallel to You Know Who and 2016 — embedded in this cycle: Biden’s opponents still have plenty of time, but not as much as you might think. Yes, the Iowa caucuses are still more than seven months away, and those months will be full of debates and town halls and public forums and a dozen or so of the current candidates dropping off the map. But after that seemingly oceanic timespan, the entire nomination contest is likely to be over lickety-split, and I guarantee you Team Biden is acutely aware of that.

Iowans will caucus on Feb. 3, 2020, with the New Hampshire primary eight days later, the Nevada caucuses 11 days after that, and the South Carolina primary on Feb. 29. Three days later, 14 states will vote on Super Tuesday, March 3, including California (the biggest delegate prize of all), Colorado, Massachusetts, Minnesota, North Carolina, Texas and Virginia. So about 40 percent of all Democratic delegates will be decided within the first month of primaries, and well over half by the end of March. If the nomination isn’t decided by then, it will surely be down to two or three candidates at most.

Viewed in that light, Biden’s apparently erratic or bumbling campaign strategy, and his insistence on barely acknowledging his Democratic rivals, makes perfect sense. Lefty social-media tribes can spend the next six months prevaricating, wrestling with doubt and attacking each other’s preferred alternatives as hopelessly corrupt and un-woken, confident that there’s plenty of time for the preposterous frontrunner’s inevitable implosion. And then, very suddenly, it will all be over.