How was the most corrupt administration of all time assembled? They drained the swamp — into the White House 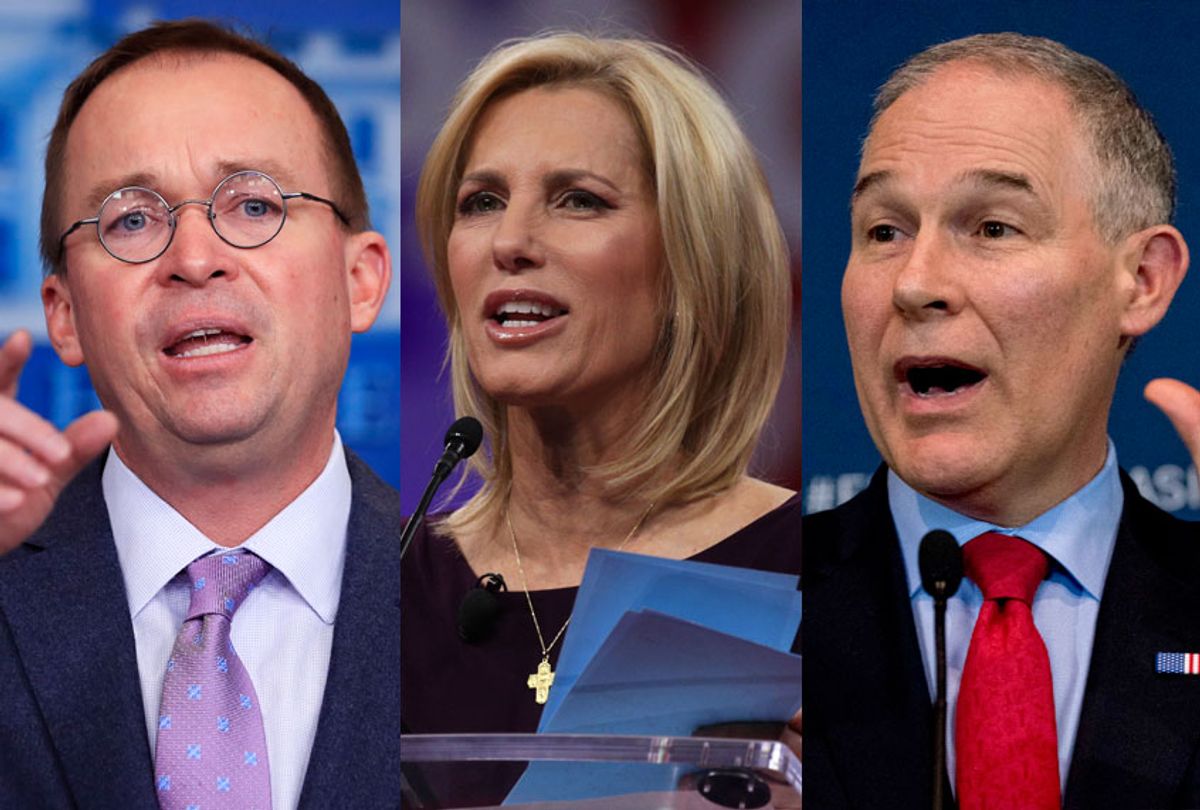 I think most people believe that one of Donald Trump's most important pledges during the 2016 campaign was to "Drain the swamp," a slogan that has become one of his followers' favorite chants. But unlike "Lock her up" or "Build the wall," Trump didn't even launch that phrase until Oct. 18, 2016, just a couple of weeks before the election.

It was formally introduced with great fanfare in a speech on the eve of the first general-election debate in which he presented his "ethics reform" program. That pledge included:

The Atlantic pointed out at the time that Trump was an imperfect messenger:

Paul Manafort and Rick Gates were top lobbyists accused of working as foreign agents in possible violation of U.S. law. His campaign and transition teams are littered with prominent industry lobbyists. And in his trafficking in falsehoods and disregard for Constitutional boundaries, Trump himself has not exactly been a paragon of high ethical standards.

Nonetheless, pundits were somewhat impressed with this package, and it got Trump some good press going into the last couple of weeks of the campaign. This was obviously tied to Trump's labeling of his opponent as "Crooked Hillary," who had, according to USA Today, "benefited time and time again from a system where lobbyists move between government, political campaigns and the private sector."

Trump no doubt believed that he'd invented "Drain the swamp," just as he believed he'd come up with "Make America Great Again," "Law and order president" and "America First," which were actually cribbed from Ronald Reagan, Richard Nixon and pre-World War II isolationists, respectively. "Drain the swamp" has a longer history than those, going all the way back to the early 20th century. More recently, it was used by Reagan in the 1980s and Nancy Pelosi in the 2006 midterms, when Democrats won a congressional majority under George W. Bush.

Trump surely heard it from both of them but since he thinks any catchy slogan that passes through his mind is one he made up, he claimed it as an original. For some reason the media decided that this had been a fundamental promise of his campaign and one of the most important planks in his platform, despite the fact that he never said a word about it until just days before the election.

Donald Trump as an ethics reformer was always an absurd joke, and that was proven almost immediately. A few months after his inauguration, the New York Times reported:

Established K Street firms were grabbing any Trump people they could find: Jim Murphy, Trump’s former political director, joined the lobbying giant BakerHostetler, while another firm, Fidelis Government Relations, struck up a partnership with Bill Smith, Mike Pence’s former chief of staff. All told, close to 20 ex-aides of Trump, friends, and hangers-on had made their way into Washington’s influence business.

Around the same time, the Washington Post reported that more than 74 lobbyists had been hired in the administration. At least 20 were working in the president's executive office, and "49 were working for agencies they used to lobby.”

He has surrounded himself with family members, appointees and advisers who’ve been accused of conflicts of interest, misuse of public funds, influence peddling, self-enrichment, working for foreign governments, failure to disclose information and violating ethics rules. Some are under investigation or facing lawsuits, others have resigned and five have either been convicted or pleaded guilty, including three for lying to government officials.

Perhaps most shocking is the number of high-level Cabinet members and top aides who resigned after having been implicated in serious ethics scandals. There has literally never been anything like it. An incomplete list includes former EPA director Scott Pruitt, who was facing more than a dozen investigations into his outrageous spending on travel and personal expenses; former Interior Secretary Ryan Zinke for numerous ethics investigations; former FEMA administrator Brock Long for unauthorized travel expenses; former Health and Human Services Secretary Tom Price for shockingly wasteful expenditures; and former national security adviser Michael Flynn, for the stunning charge of working for a foreign government while he was serving in the presidential campaign and transition.

There are half a dozen cabinet members still serving who are riddled with conflicts and several ongoing federal investigations into Trump's inaugural committee over allegations of illegal foreign contributions, access and bribes. I don't think I have to mention Jared Kushner and Ivanka Trump, do I?

Last week Trump's choice to lead the Pentagon, Acting Defense Secretary Patrick Shanahan, resigned after it was revealed that he had a serious issue with domestic abuse in his past. (He's the second Trump official to resign over such charges.) It turns out administration insiders knew about this but apparently figured they could let it slide. When asked about his vetting process, Trump replied: We have a very good vetting process. You take a look at our Cabinet and our secretary is very good. But we have a great vetting process."

That's funny. Axios reported on Sunday that its reporters had received leaked copies of the vetting reports used during the transition. As you may recall, Trump fired former New Jersey Gov. Chris Christie as head of the transition two days after the election and threw away all the work that had been done up to that point.

What the transition came up with after that was apparently work done by interns at the Republican National Committee instead of by veteran Washington lawyers, as is usually the case. But even those caught many of the conflicts of interest and dubious ethical lapses of the people Trump hired for his administration.

Supposedly Trump read these reports. I doubt that. He's not a reader. We know he hired people based upon whether they looked like they "came from Central Casting." What we didn't know was that he thought he was casting the new season of "Swamp People."