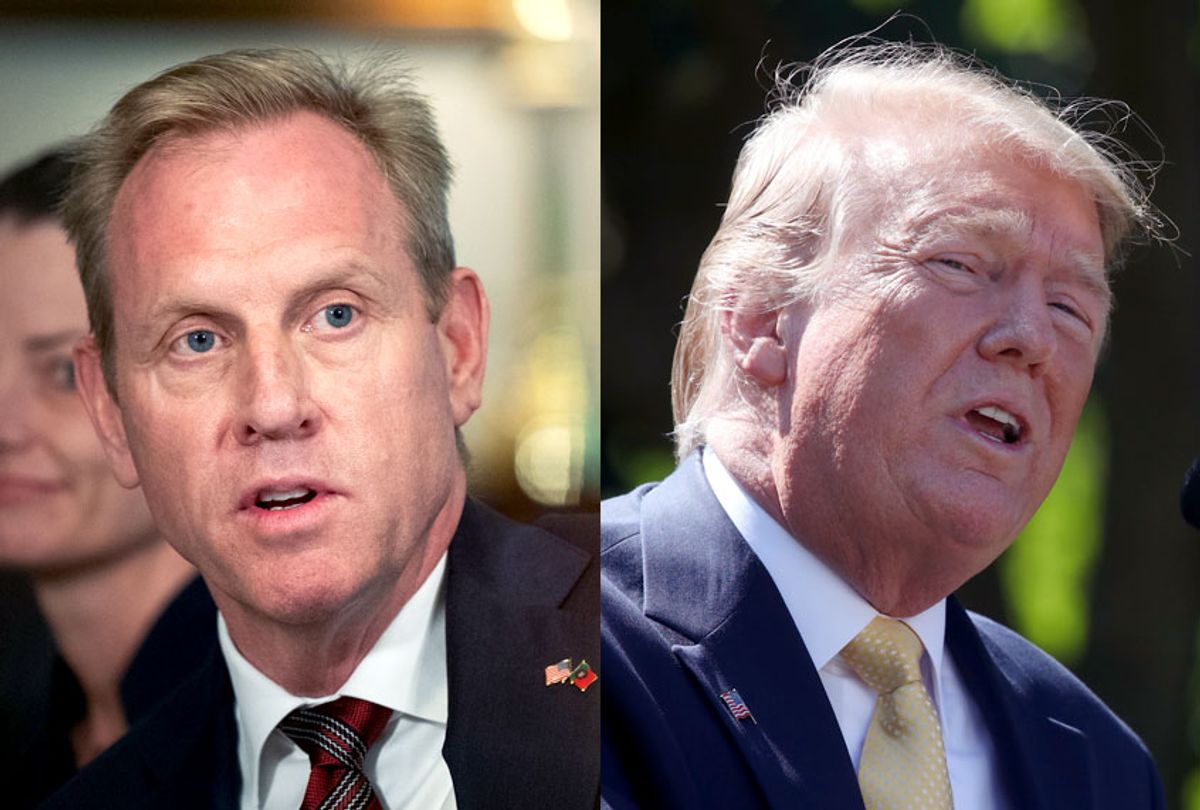 Acting Defense Secretary Patrick Shanahan has withdrawn his name from consideration for the full time gig.

"Acting Secretary of Defense Patrick Shanahan, who has done a wonderful job, has decided not to go forward with his confirmation process so that he can devote more time to his family...." President Donald Trump wrote Thursday afternoon in a tweet.

The president later added, "....I thank Pat for his outstanding service and will be naming Secretary of the Army, Mark Esper, to be the new Acting Secretary of Defense. I know Mark, and have no doubt he will do a fantastic job!"

While it is unclear if there is a connection between the two stories, Shanahan's withdrawal came shortly after reports leaked of alleged incidents of domestic violence involving his family.

The FBI has been investigating a reported incident from nine years ago, in which Shanahan and his then-wife Kimberley ⁠— now Kimberley Jordinson ⁠— each claimed they had been punched by their spouse, according to USA Today. Shanahan has said he "never laid a hand on" his former wife, while she has claimed the opposite. It was widely expected that the incident would have possibly received greater scrutiny from both Congress and the American public should Shanahan have proceeded with the confirmation process.

In his statement on the incident, Shanahan argued that "our story is not dissimilar to those of the many families facing the difficult challenges that come when a loved one struggles with substance abuse and other emotional issues as is the case with my former-wife. I wish nothing but the best for her and regret that my children’s privacy has been violated, and they are being forced to relive a tragic situation that we have worked so hard as a family to put behind us."

In addition to the incident with his wife, there has also been increased attention on a 2011 incident, in which Shanahan's son was arrested after beating his mother with a baseball bat, according to the Washington Post. The Post reported that the attack "left Shanahan’s ex-wife unconscious in a pool of blood, her skull fractured and with internal injuries that required surgery, according to court and police records."

Shanahan later defended his son by claiming he had acted in self-defense, a position that he has since publicly expressed regret for taking. He told The Post that "bad things can happen to good families . . . and this is a tragedy, really." He also expressed concern that drawing attention to the incident "will ruin my son’s life."

With Shanahan now removed from contention for the full-time defense secretary post, attention turns to Esper, whose past has drawn concerns about possible conflicts of interest.

"In Patrick Shanahan, President Trump had an acting secretary of defense whose decisions were overshadowed by his previous senior position at Boeing," Citizens for Responsibility and Ethics in Washington (CREW) Executive Director Noah Bookbinder said in a statement. "His successor will likewise risk being tainted by his previous work for a major defense contractor. Esper joined the government following years as a top lobbyist for Raytheon. Already this week, Raytheon has won multiple government contracts worth hundreds of millions of dollars."

"While Esper may not have had sway over these types of deals as secretary of the Army, as acting secretary of defense he will have potential influence over such deals, as well as over the controversial proposed merger of Raytheon and UTC to become the second largest defense company in the U.S.," Bookbinder continued. "His ethics agreement—and his ability to follow it—will be something we will be watching closely."

Shanahan's past with Boeing and actions as defense secretary led to concerns that he had unethically used his office to promote the interests of his former employer, although an internal probe later cleared his name.