Beto O'Rourke's "war tax" is straight out of "Starship Troopers" 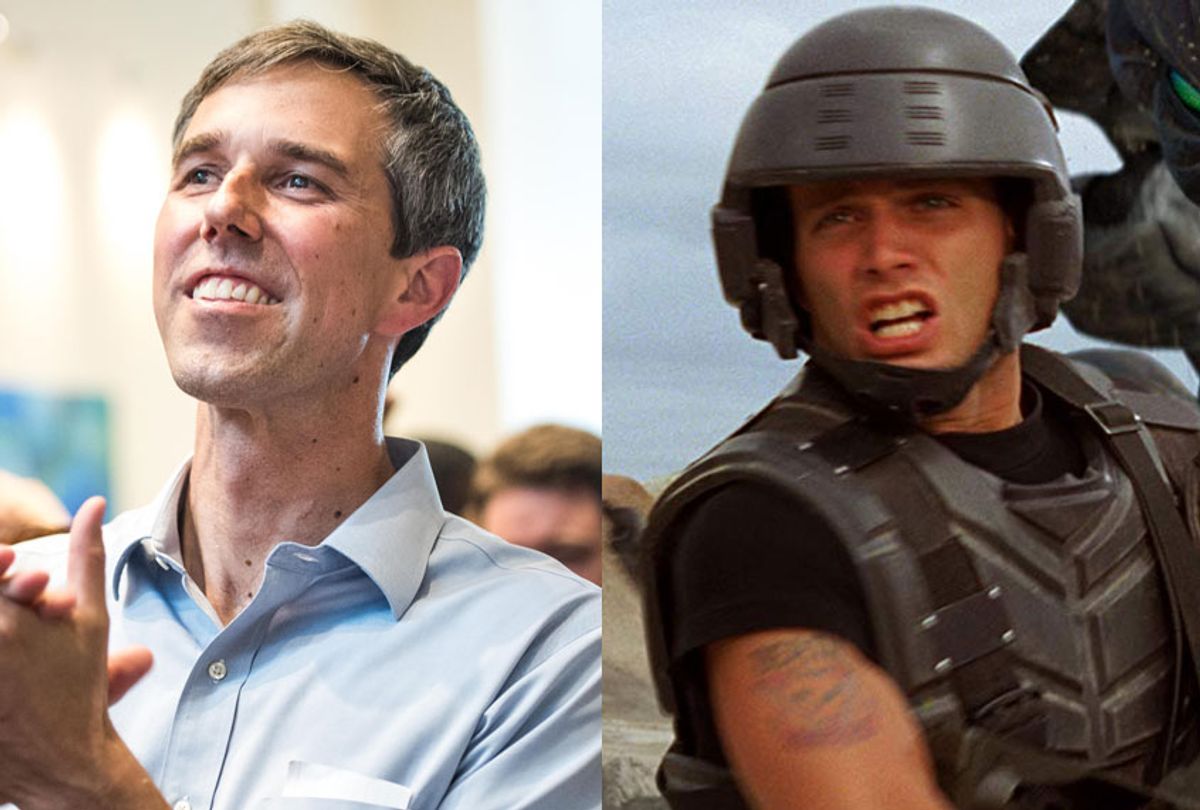 Amid an overcrowded Democratic presidential candidate field, it's hard to distinguish yourself from the pack if you don't slot easily into the scale that runs from "pro-corporate centrist" to "left-populist." If you're former Texas congressman Beto O'Rourke —  who falls somewhere in the middle, politically, and somewhere towards the top, looks-wise — you pull a militaristic policy proposal out of your hat that recalls some of the most campy pseudo-fascist sci-fi ever written.

O'Rourke calls his idea a “war tax,” and, as CNN explains, it would work like this:

Non-military households would pay a "war tax" to help cover the health care of veterans of newly-authorized wars under a plan Beto O'Rourke's campaign unveiled Monday. [...] Money collected through the "war tax" — which he is proposing for future wars — would go into a new trust fund for veterans established at the outset of each war.

"This new tax would serve as a reminder of the incredible sacrifice made by those who serve and their families," O'Rourke's plan says.

O'Rourke's plan seems designed to please both conservative Democrats and anti-war liberals, though it is likely it will do neither. It's just sinister jingoism, remarkably reminiscent of the politics of Paul Verhoeven's 1997 movie "Starship Troopers." In the opening scene of that film, a recruitment ad for Earth's armed forces flashes across the screen: “Join the mobile infantry and save the world! Service guarantees citizenship.” An infantry recruit looks dead in the camera and says, “I’m doing my part!” The key political theme of the movie —  which is set on a militarized Earth in the near future — is the notion that military service grants you entry to a superior social caste. In a later scene, a teacher in a “History and Moral Philosophy” class explains to his students why only those who have completed military service are allowed to vote.

“When you vote, you're exercising political authority. You're using force. And force, my friends, is violence, the supreme authority from which all other authority derives,” Mr. Rasczak, played by Michael Ironside, explains to his eager cadets.

Of course, "Starship Troopers" was a satire of a militarized, fascist society; yet in the original novel from which it was loosely based, author Robert Heinlein was dead serious. Throughout Heinlein’s life, the science fiction legend devolved into a right-wing lunatic, and by the time "Starship Troopers" was serialized, he'd gone almost full-fash. The book version of “Starship Troopers” includes a positive depiction of flogging as a military punishment as well as the aforementioned earnest proposal to restrict voting rights to service members.

O'Rourke doesn't propose to strip voting rights from civilians, but his war tax comes close to turning us into a stratocracy, much like Heinlein envisioned. Indeed, there are a number of alarming, and frankly anti-democratic, things about O'Rourke's war tax proposal.

First, the tax is only faintly progressive in how it is distributed across income brackets. Raytheon’s CEO pulled a $20.4 million salary in 2016, but he and his arms-dealing ilk would only have to pay $1,000 for the “war tax,” though he profits from war tremendously. The war tax as proposed would mean almost nothing to the super-rich, who would barely "feel" any sort of war tax burden at all — similar to how the rich experience war generally, I suppose. Some war tax proponents have proposed a severely progressive tax that would soak the rich, but O'Rourke's income bracketing decisions are abysmal and far from that pipe dream.

Second, and perhaps most disturbing, is that the tax is not universal, but selective. “Non-military households” do not pay it. That alone suggests that joining the military, or being part of a military family, grants you a higher form of citizenship, an exemption from this war tax — how very Heinleinian of O’Rourke.

Of course, military veterans and active service members suffer unique hardships for which the welfare state should help them. PTSD, unemployment and suicide rates are, notably, much higher for veterans; the Department of Veterans Affairs is supposed to help deal with these kinds of issues, but is perpetually underfunded and mismanaged. Veterans do receive some special government benefits, including special home loan terms and in some cases lifetime healthcare for service-related injuries. Yet unlike O'Rourke's war tax, these are given as rewards for service; the war tax is the opposite, a punishment for not serving. And the optics of that are quite different.

Third, O'Rourke's war tax is an astonishingly uncritical take on American Empire, and its function and purpose. A few Democratic presidential candidates, namely Rep. Tulsi Gabbard (D.-Hawaii) and Bernie Sanders (I-Vt.), have been explicitly anti-imperialist. O'Rourke, clearly, isn't; he just wants us to think about how much war costs by looking at an extra fee tacked onto our taxes. Though of course, that small number isn't really how much we spend on war.

That's because we already pay a war tax when we pay our federal taxes. More than half of all federal discretionary spending goes to the U.S. military budget, which was anticipated to reach around $700 billion in 2018. Given the tragic way that the U.S. spits out many of its veterans, one would think it wouldn't be too politically difficult to send a bit more of that massive sum to veteran's healthcare and support instead of wasting it on military jet boondoggles or losing it in an accounting black hole.

And yet, some Beto-loving liberals may protest, O'Rourke is trying to pitch this war tax as an anti-war thing. "Eighteen years into the war in Afghanistan, and nearly three decades after our first engagement in Iraq, the best way to honor our veterans' service is to cancel the blank check for endless war," he says. To which I say, our federal income taxes are already going to a blank check for endless war.

Moreover, if O'Rourke intends his "war tax" to be an attempt at stirring up anti-war sentiment, then he is falling into a right-wing trap when it comes to his conception of taxes: the idea that taxes are transactions, and the state is a "provider" of services, akin to a business. This is Grover Norquist–level sophistry: the government is not a business, and we are not customers who "buy" their services with our tax dollars. That entire line of thinking undermines the function and purpose of the state in a democracy.

Verhoeven’s “Starship Troopers” movie was not simply an action-comedy, but — like all good satire — a warning. The central conceit of the film was that an asteroid that had struck Earth had been sent by giant alien bugs as an act of provocation — and the humans had to retaliate with military force. Yet it was never clear whether the bugs, which are depicted as deadly but not too bright, were really behind the provocation, or if it was a conspiracy perpetuated by Earth’s military government as a pretext for war. Military service seems much less glorious when it happens under false premises, or under the weight of government or corporate propaganda. And a war tax certainly won't cure that.