"Nobody in this country is above the law," Rep. Elijah Cummings said in regards to the subpoena 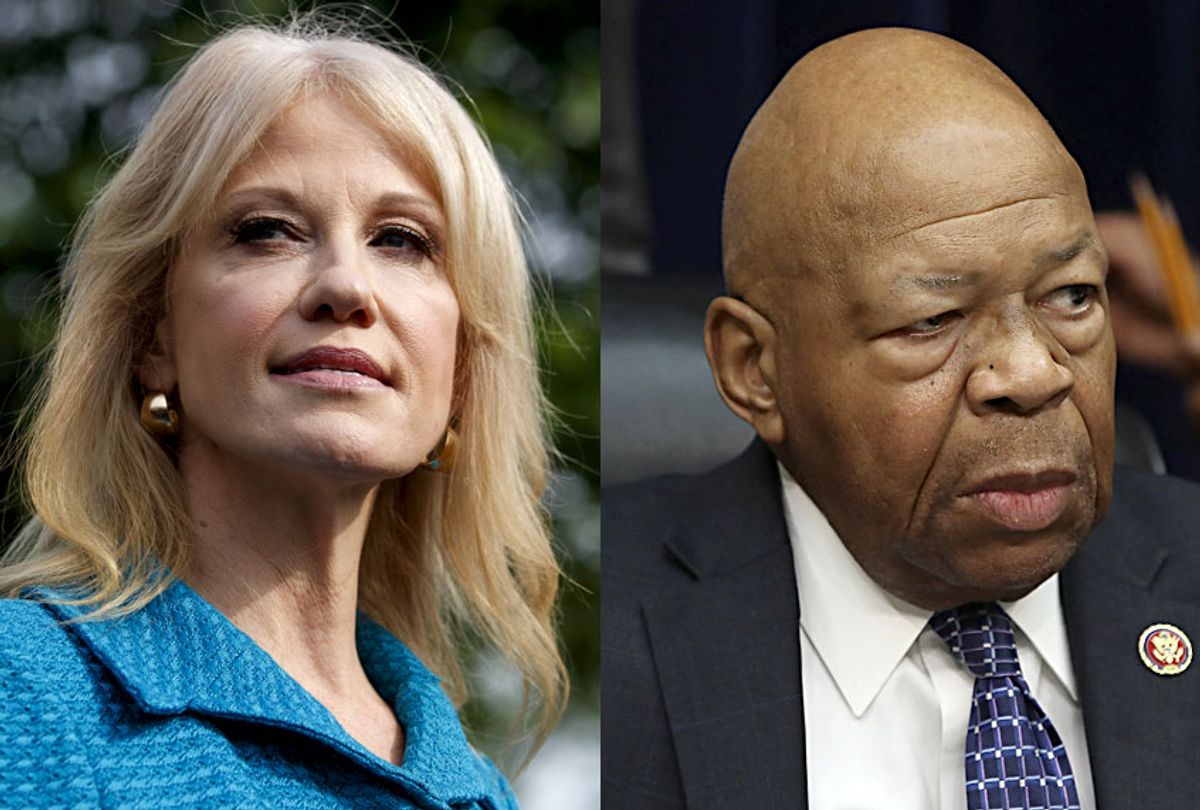 The House Oversight Committee voted to subpoena testimony from Kellyanne Conway over her alleged violations of the Hatch Act following her failure to show up Wednesday at a scheduled congressional hearing.

Earlier this month, the Office of Special Counsel's recommendation that President Donald Trump fire Conway for repeatedly violating the Hatch Act, which limits how federal employees can engage in political activity while on the job. The House panel scheduled a hearing on the matter for Wednesday, but Conway did not appear at the advice of White House counsel, prompting the subpoena.

"This is not a conspiracy to silence her or restrict her First Amendment rights. This is an effort to enforce federal law. Nobody in this country is above the law," Rep. Elijah Cummings, D-Md., said in regards to the subpoena.

Various Republicans attempted to discredit the committee's attempts to look into Conway's conduct by attacking the character of special counsel Henry Kerner, according to the Washington Post.

Kerner testified before the committee on Wednesday that "Ms. Conway’s egregious and repeated Hatch Act violations combined with her unrepentant attitude are unacceptable from any federal employee, let alone one in such a prominent position. Her conduct hurts both federal employees, who may believe that senior officials can act with complete disregard for the Hatch Act, and the American people, who may question the nonpartisan operation of their government."

Even though Kerner is a former committee staffer who worked for Republicans and investigated former President Barack Obama, he has now been accused of having ulterior motives in attempting to hold Conway accountable.

"The reason we’re here today is because Mr. Kerner got his feelings hurt. Mr. Kerner felt slighted. Ms. Conway didn’t pay enough attention to him and his office . . . You know why she didn’t? Because the allegations were ridiculous," Rep. Jim Jordan, R-Ohio, said during the hearing.

Rep. Mark Meadows, R-N.C., echoed Jordan's thoughts, claiming that Democrats were trying to punish Conway for exercising her free speech rights "We are better than this," he said.

Meadows' comments were similar to those that Conway herself made on Monday to "Fox & Friends."

"You know what they’re mad about?" Conway asked. "They want to put a big roll of masking tape over my mouth, because I helped as a campaign manager for the successful part of the campaign . . . So they want to chill free speech, because they don’t know how to beat [Trump] at the ballot box."

Conway has been criticized for allegedly using her official federal government position to advance Republican Party interests, from weighing in on the tight 2017 Alabama Senate race to attacking former Vice President Joe Biden, the current frontrunner in polls to oppose Trump in the 2020 presidential election.

In refusing to appear before Congress, Conway's rationale was provided directly from 1600 Pennsylvania Avenue.

White House counsel Pat Cipollone wrote in a letter to Chairman Elijah Cummings, D-Md., "The precedent for members of the White House staff to decline invitations to testify before congressional committees has been consistently adhered to by administrations of both political parties and is based on clearly established constitutional doctrines."