Not all white guys — but a lot: A debate preview of the Democratic dudes

Who are all these white men running for president — and why? Only a handful actually have a clear rationale 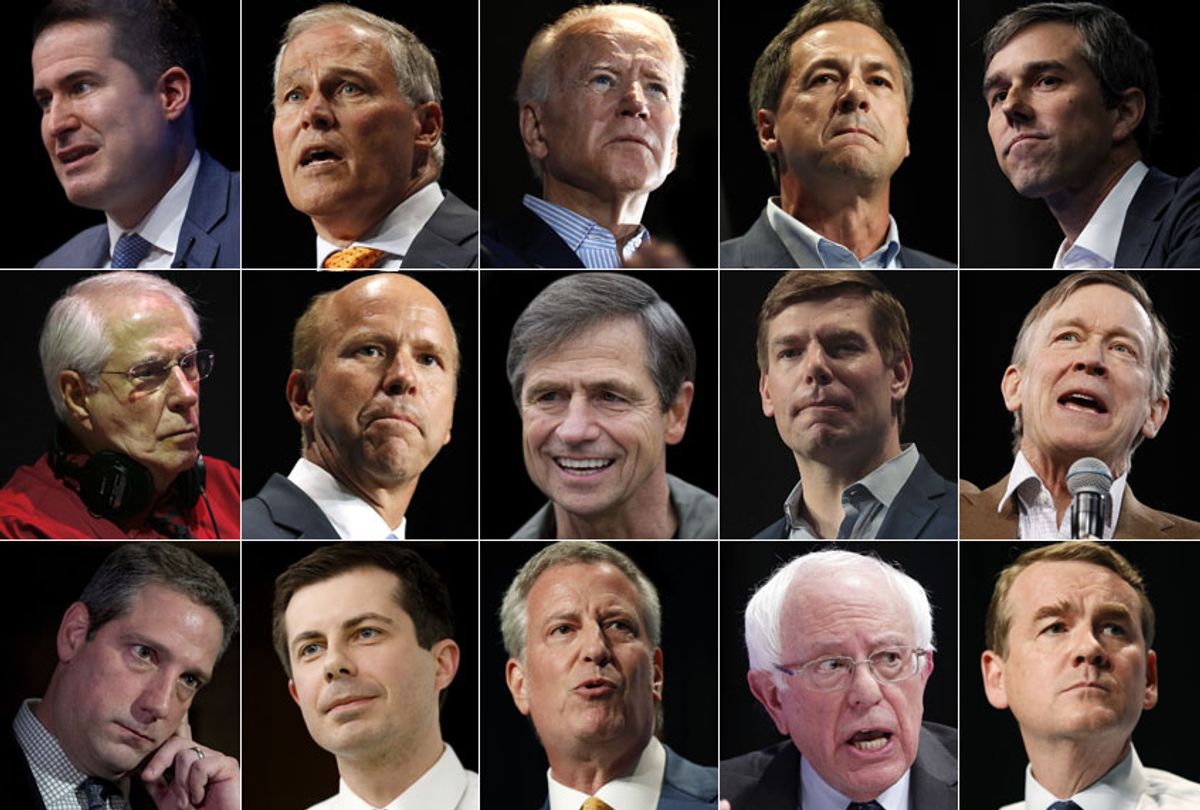 The country’s last presidential election was wide open, with incumbent president Barack Obama termed out of office and his vice president, Joe Biden, opting not to run as his replacement. While the vacancy looked like an opportunity for the 16 Republican men (and one woman) who ran in 2016, Democrats essentially cleared the field for Hillary Clinton, the first woman to win the party’s presidential nomination. Her only two challengers were white men; one who eventually became a star at the center of his own political movement and the other who was shortly reduced to strumming his guitar shirtless for attention.

Oh, how we miss the simpler times with Martin O’Malley.

This time around more than two dozen people are looking to challenge President Trump in a crowded and already overwrought Democratic primary. With the first debates of the season being held in Miami over the next two nights, many Democratic voters still don’t yet have fully formed opinions of the candidates. So it may be helpful to realize that only about half of the white Democratic men who have declared their candidacy for president have actually articulated a clear rationale for running — and I’m being generous.

There are John Delaney and John Hickenlooper, a former congressman and governor, respectively. Neither of them currently holds public office. Bill de Blasio and Pete Buttigieg both currently have day jobs as mayors, albeit of cities of vastly different sizes. (One of them is roughly 85 times larger than the other.) Michael Bennet and Bernie Sanders both currently work in the U.S. Senate, while Eric Swalwell, Seth Moulton and Tim Ryan are still serving in the U.S. House of Representatives. Joe Sestak, the newest entrant into the race, used to be a congressman until he was booted out of office, and Beto O’Rourke gave up his seat in the House to pursue a failed bid for the Senate last cycle. Steve Bullock and Jay Inslee both currently serve as chief executives of their states, Montana and Washington, respectively. Mike Gravel ran for president once before (and long ago was a senator from Alaska). And then there is Joe Biden.

Those are the over a dozen white men running to court a Democratic primary electorate that was 58% women and 38% black in 2016. So much for a party supposedly obsessed with “identity politics.” While nearly all of them have argued that they alone "can fix it," or at least can win back at least some of the white working-class voters Democrats lost to Trump in 2016, few have actually provided reasonable proof to back that up.

Biden and Sanders are well known to virtually all voters, and sit comfortably enough atop the available early polls to make an obvious case for their candidacy, if not for their electability. Pete Buttigieg, for better or worse, has become a media celebrity. Bill de Blasio has next to no chance, but is at least a well-known figure in the nation's media capital. But what about the other guys?

Delaney, a businessman and former Maryland congressman, passed up an opportunity to challenge his blue state’s popular Republican governor, Larry Hogan, last cycle. Delaney opted instead to become the first Democrat to launch a challenge to Trump, announcing his candidacy only six months after the president took office. As late as February, Delaney remained the only straight white male candidate in the race, although 11 people, including two black candidates, two Asian-American candidates, one Hispanic candidate, one Samoan-American candidate, and the first openly gay candidate, had already declared. I think it's safe to say the white guys who jumped in late have made up for that

Another former congressman, O’Rourke, tried his hand at unseating a Republican in higher office with his unsuccessful challenge to Sen. Ted Cruz last year. Pundits briefly perceived O’Rourke as the same kind of inspirational blank check provided by Barack Obama was in 2008, but it looks like few outside of Texas agree so far. O'Rourke has failed to poll above 5% in most early state polls, and nationally is well below that.

Rep. Eric Swalwell of California and Rep. Seth Moulton of Massachusetts do not represent districts that voted for Trump, unlike the northeastern Ohio district represented by Rep. Tim Ryan, so there goes that argument about Trump voters. Moulton did not qualify for the first round of debates but appears committed to plugging onward.

Montana Gov. Steve Bullock, like Ryan, can lay actual claim to being elected by the same voters who elected Trump — a not so shabby feat. He, like Washington Gov. Jay Inslee, also appears to be running a largely one-issue campaign. Bullock's is to get dark money out of politics. Inslee is even more explicit about his singular focus, which is climate change — and has produced a detailed policy plan praised by many progressives, including Rep. Alexandria Ocasio-Cortez.

The two white men from Colorado, former Gov. John Hickenlooper and Sen. Michael Bennet, are interchangeably nondescript, and appear to be running as hall monitors aiming to moderate an increasingly progressive Democratic base. And then there is Sestak, a former Pennsylvania congressman who mounted unsuccessful bids for the Senate in 2010 and 2016. Lord only knows why he's running. Did I forget Mike Gravel?

Will any of the lower-tier white male Democrats have a breakout performance this week? There's no telling — but maybe the real question is how many of them will come to their senses and move on with their lives.