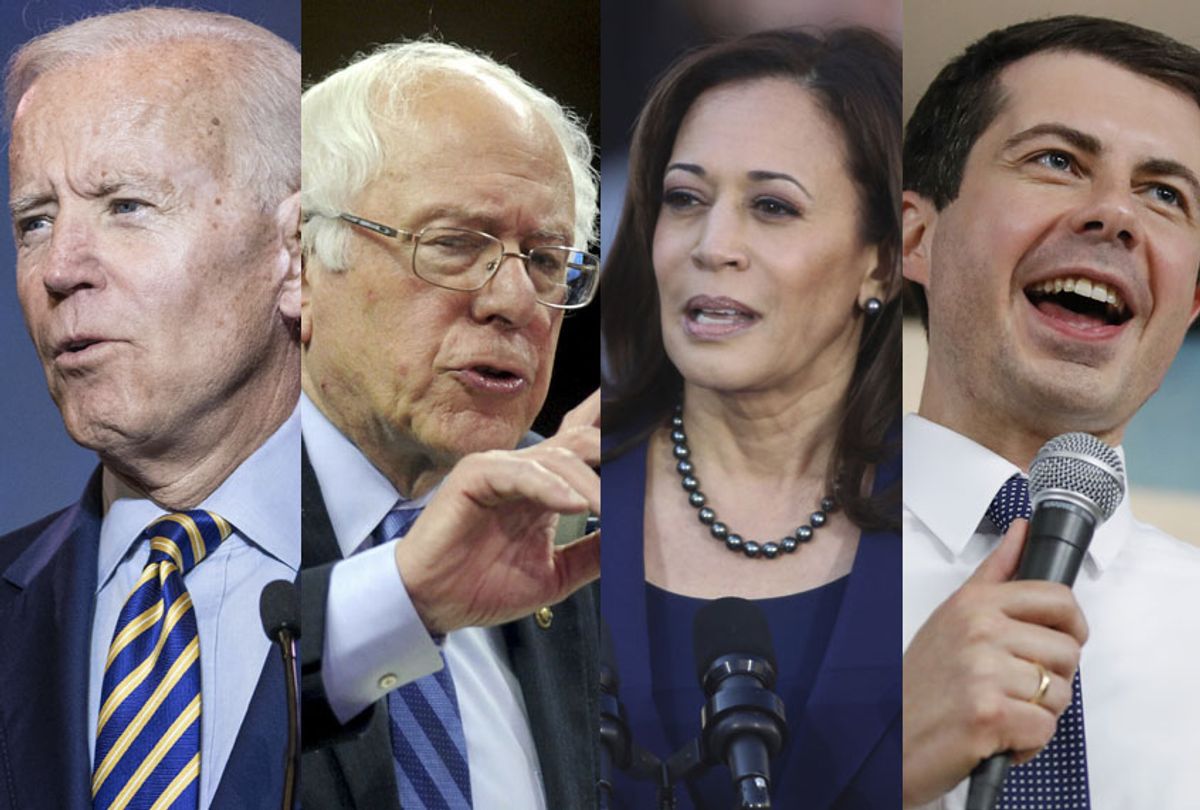 After the first night of an often bewildering debate featuring 10 presidential candidates, it's time for Democratic Primary Debate 2: Biden Strikes Back. This time, there at least the two men standing center stage — former Vice President Joe Biden and Sen. Bernie Sanders — who are actually famous and known to most voters, as the "grinning guy standing next to President Barack Obama" and "the shouty guy Larry David played on 'SNL.'"

The rest of the field, however, is still facing an electorate who is asking the basic questions: "Who are these people?" and "How can I tell them apart?" So Salon is here to help, with round two of our quick-and-dirty rundown of who's who in the second night of the Democratic debates.

Standing at 38% in the polls, Biden has maintained a healthy lead over the other candidates, at roughly double the current support of his closest contender, Sanders. But primary polls are volatile, and there's good reason to believe Biden is just doing so well now because voters associate him with Obama but know very little else about him. (My money's on that option, as Biden's last two efforts at running for president were dismal failures.)

Biden has a big, red target painted on his back, both because he's the clear early frontrunner and because his long political history and glib rhetorical style give his opponents a lot to work with: His coziness with the banking industry, his bragging about his friendships with segregationists (coupled with his opposition to school busing), and his pockmarked history on women's issues. Odds are that his competitors are gaming out ways to bait Biden into acting defensively or saying something dumb, and he may have to spend the night trying to keep his cool.

The Candidates With Something to Prove: Sen. Bernie Sanders, Sen. Kamala Harris and Mayor Pete Buttigieg

Sanders came into the 2020 race with a lot of perceived wind at his back, having cultivated a rabid fan base and widespread name recognition by losing a tight primary race against Hillary Clinton in 2016. But he's been sliding in the polls since March, falling from 27% to 19%, and it's reasonable to conclude that his surge in 2016 was more about anti-Clinton sentiment than actual Bernie fever. This debate may matter more to Sanders than anyone, as he needs to find some way to wow viewers and regenerate some of that excitement, or he runs a real risk of being regarded as yesterday's news.

Harris, California's junior senator, had a strong campaign launch in January, but has been struggling ever since to find a hook that will make her seem like a viable candidate to run against Donald Trump. But her June 22 speech at the South Carolina Democratic Convention, in which she leaned into her past as a prosecutor, laying into Trump on his "rap sheet" and declaring that she knows "how to take on predators," launched a viral video. If she can get that message across to voters who want a tough cookie to take Trump down, she has a real chance of getting a better footing in the polls.

Buttigieg, the 37-year-old mayor of South Bend, Indiana, got a flurry of flattering coverage in the spring, because he speaks several languages and can play the piano, neither of which is a skill useful to the job of the presidency. He continues to be a candidate that well-educated white people like to say they find interesting at cocktail parties. But if he wants to be more than a flash in the pan, he needs to stand out during the debate.

New York's senator has fallen well behind in the race and reported disappointing fundraising numbers, largely because she's become a scapegoat Sen. Al Franken's resignation after eight different women accused him of sexual misconduct. One could argue that Franken's problems were entirely his own fault, but the blame-the-woman crowd is heavily represented in the donor class, creating real concerns that Gillibrand's campaign is moribund even if she can catch voter interest.

Still, what people may not know yet is that Gillibrand is flexible, smart and good on her feet. So there's a not-small chance that people who've written her off before might find her impressive on Thursday night.

Williamson is a self-help guru, one of many propelled to fame by Oprah Winfrey, and has managed to parlay that into enough donations to get her into the debate to embarrass herself. It's all very odd, and made worse by the fact that she sends out fundraising emails  encouraging her fans to do yoga through the debates.

Yang is a guy who made a lot of money in the start-up world and is now a philanthropist. He's basically the "TED Talk" candidate — yes, he's given one — which is to say he's a guy who talks big, lofty ideas but there's no reason to believe he's equipped to handle the nuts and bolts of government. Still, he has a bit of a dark horse quality: He's funny and self-deprecating and he talks really good, and debates are all about talking real good.

Candidates Who May Have to Set Themselves on Fire: Gov. John Hickenlooper, Sen. Michael Bennet, Rep. Eric Swalwell

I wouldn't count out Swalwell, a California congressman, when it comes to actually igniting his clothing, as he has a long history of behaving in weird and unsavory ways — such as staging a fake debate with an actor costumed to look like his opponent — in order to get attention.

Wednesday's debate was mostly collegial between the top-tier opponents, but there's good reason to believe there may be more conflict on Thursday, as Sanders and Biden are strongly invested in making each other look bad. Still, as with Wednesday, don't be surprised if the main effect is showing which candidates need to find a trap door to jump through — even if most of them are too blinded by ego to know it.