"Marianne Williamson for Secretary of Crystals": The bonkers break-out character of NBC's debates 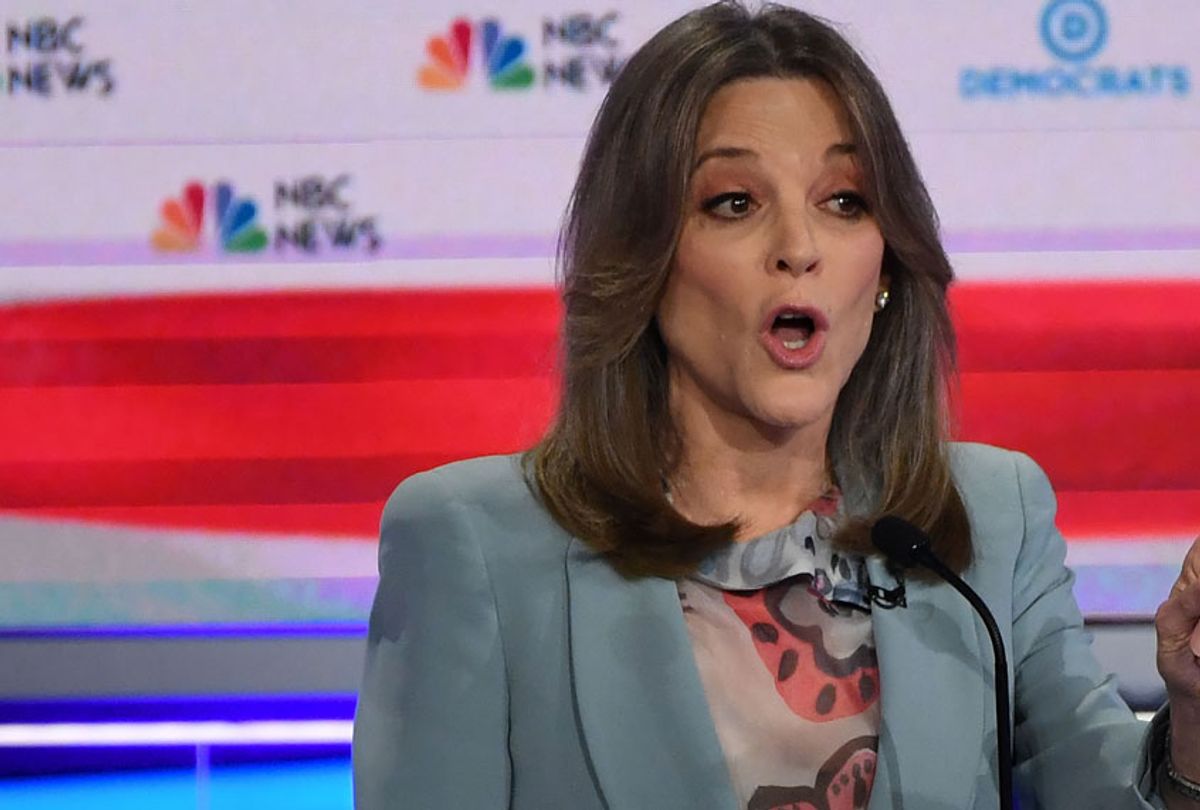 There's an episode during the third season of "Broad City" in which Ilana Glazer picks up a cat, examines it closely and then sincerely asks, "What you?" That seems to be the collective response to author and presidential hopeful Marianne Williamson after her appearance on the second night of NBC's Democratic debates this week.

Williamson is a bestselling self-help author; some of her books include “The Law of Divine Compensation: On Work, Money and Miracles,” “A Course In Weight Loss: Spiritual Lessons for Surrendering Your Weight,” and “Healing the Soul of America: Reclaiming Our Voices As Spiritual Citizens.”

As Oprah's spiritual advisor, she has a platform and a message that reaches swaths of the electorate who perhaps aren't mainlining the Sunday morning political news shows. Over the years, she's tweeted things like: “God is BIG, swine flu SMALL.  See every cell of your body filled with divine light. Pour God's love on our immune systems. Truth protects,” and “The power of your mind is greater than the power of nuclear radiation. Visualize angels dispersing it into nothingness.”

Earlier this month, she had to backpedal on statements that led critics to believe she was coming out as 2020’s anti-vaxxer candidate. Then this week, her campaign sent out a pre-debate press release encouraging debate audiences to substitute yoga for a drinking game during the debate. (“Every time someone talks about the green new deal, strike an eagle pose.”)

And while she only spoke for four minutes and 54 seconds during last night’s debate (compared to the 13 minutes of former vice president Joe Biden, or Sen. Kamala Harris’ 12 minutes), she made a spectacle of every second, notably when she detailed her first move if elected president:

“My first call is to Prime Minister of New Zealand who said that her role is to make New Zealand the place where it’s the best place in the world for a child to grow up,” she said. “And I would tell her, ‘Girlfriend, you are so wrong because the United States of America is going to be the best place…”

Throughout the debate, she indicated that she wasn’t really a plan person (“If you think we are going to beat Donald Trump by just having all of these plans you’ve got another thing coming.”) and referenced John F. Kennedy sending people to the moon while the other candidates discussed climate change.

Meanwhile, viewers watched her unpredictable responses with bemusement and disbelief.

In her closing statement, Williamson declared that she would "harness love for political purposes" as a way to defeat President Donald Trump.

Given her kooky answers (which were all the stranger when compared to a standout performance by Harris), Williamson's chance at winning the primary is slim. While debate viewers on Twitter certainly responded to her presence on the stage, the reaction largely took the form of jokes and memes rather than serious contemplation of her answers. Her time on the official campaign trail may be cut short, but don't worry — fans  of her outsized personality, ironic or otherwise, will surely have her inevitable self-help book slash campaign memoir to look forward to next year.