The spacecraft is expected to look like an enormous drone, and will search for hints of past or present alien life 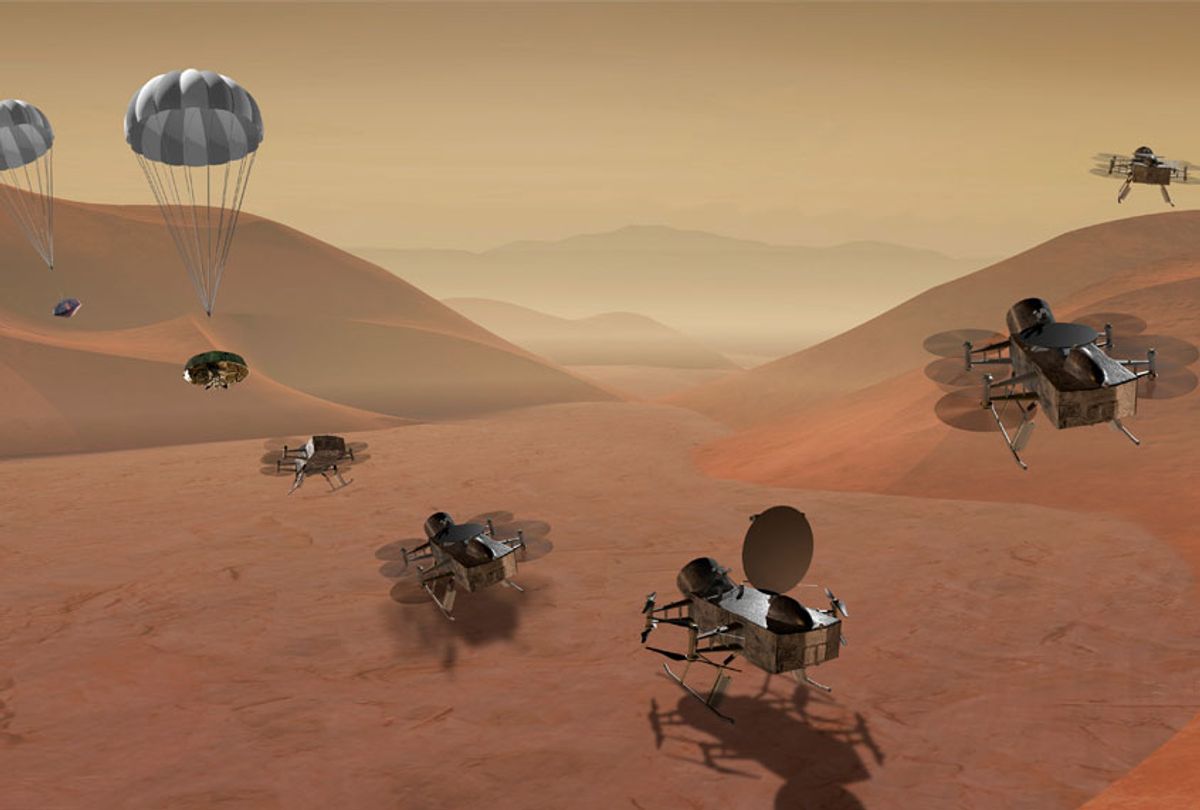 This artist's rendering made available by NASA shows multiple views of the Dragonfly dual-quadcopter lander that would take advantage of the atmosphere on Saturn's moon Titan to explore multiple locations, some hundreds of miles apart. (NASA via AP)
--

NASA announced Thursday that it is sending a billion-dollar flying robot to explore the surface of Saturn's largest moon, Titan, as part of a new mission called "Dragonfly."

Dragonfly will be able to fly across the skies of Titan and land periodically to take scientific measurements, study the moon's mysterious atmosphere and topography, subsurface ocean and liquid on the surface, while searching for hints of past or present life.

The 10-foot-long and 10-foot-wide dual-quadcopter is expected to look like an enormous drone, with eight rotors helping it travel from location to location across the moon's surface at a speed of about 5 miles (8 kilometers) in under an hour.

The mission will be developed and led by the Applied Physics Laboratory at Johns Hopkins University in Laurel, Md.

"This revolutionary mission would have been unthinkable just a few years ago," NASA administrator Jim Bridenstine said in a video announcing the mission.

The spacecraft is scheduled to launch in 2026, though it will not touch down on the surface of Titan until 2034. It has an expected life-span of roughly two-and-a-half years, and will be powered by a battery that will be recharged with a radioactive power source between flights.

Dragonfly will feature several cameras, as well as an assortment of scientific equipment, including spectrometers to identify large organic molecules, a host of meteorology sensors and a seismometer to detect quakes that could reveal the thickness of the moon's ice crust. The spacecraft will also be equipped with drills to collect samples.

"Titan is such an amazing, complex destination," said Elizabeth Turtle, who will lead the mission for the lab as its principal investigator. "We don't know the steps that were taken on Earth to get from chemistry to biology, but we do know that a lot of that prebiotic chemistry is actually happening on Titan today. We are beyond excited for the chance to explore and see what awaits us on this exotic world."

Titan has long intrigued scientists who have longed for the opportunity to see the far-away moon up close. On December 24, 2004, NASA's Cassini spacecraft dispatched a probe, Huygens, to the moon's surface. Huygens parachuted to Titan in one piece and found that the large moon is home to seas and lakes filled with liquid ethane and methane, as well as clouds and massive fields of sand dunes.

Part of the Dragonfly mission is to examine whether Titan could now be — or once was — home to alien life. Because of its thick, nitrogen-based atmosphere and possible layer of liquid water ocean beneath its surface, the moon is thought to be the most Earth-like world in the solar system and one of the best candidates for alien life. Titan's atmosphere is also four times denser than Earth's and its gravity is about one-seventh of Earth's — a combination that makes it an ideal location to deploy a drone and investigate extraterrestrial life.

Dragonfly was one of two finalists being considered for the New Frontiers program, a source of funding for space probes with groundbreaking scientific missions. Dragonfly was one of two finalists in the program; the other, spearheaded by Steven Squyres at Cornell University, is was called CAESAR, and would have aimed to collect samples from comet Churyumov-Gerasimenko and return them back to Earth in order to try to understand how comets have shaped life on Earth.

The two missions had made it through several competitive rounds before the final decision to go with Dragonfly. Planetary missions developed by NASA's New Frontiers program are considered mid-tier, meaning they are capped at $1 billion and therefore less expensive than the agency's multibillion-dollar "flagship" missions, like the $2.5 billion Curiosity Mars rover — though more expensive than the agency's "Discovery" missions — like the Mars InSight lander currently exploring Mars, which cost roughly $850 million, or the Dawn spacecraft orbiting the dwarf planet Ceres, which cost $500 million.

Only three other missions have been funded through the New Frontiers program. Those missions include the New Horizons spacecraft, which visited Pluto in 2015; Juno, which now orbits Jupiter; and Osiris-REx, which will soon collect a sample from the asteroid Bennu and return it to Earth.

In addition to Dragonfly, NASA recently announced two new missions — PUNCH and TRACERS — to study the sun and how it affects Earth. And in May, the Trump administration urged Congress to kick-start plans to return U.S. astronauts to the moon in 2024, as part of a mission called "ARTEMIS," and to include an additional $1.6 billion for NASA's budget next year.

For now, mark your calendars: 2034 will mark the first time humans fly a drone on another world.