Saturn's moon Titan has dust storms much like Earth

Like desert dust storms on Earth, scientists find that huge storms whip up dust and dirt on Saturn's biggest moon 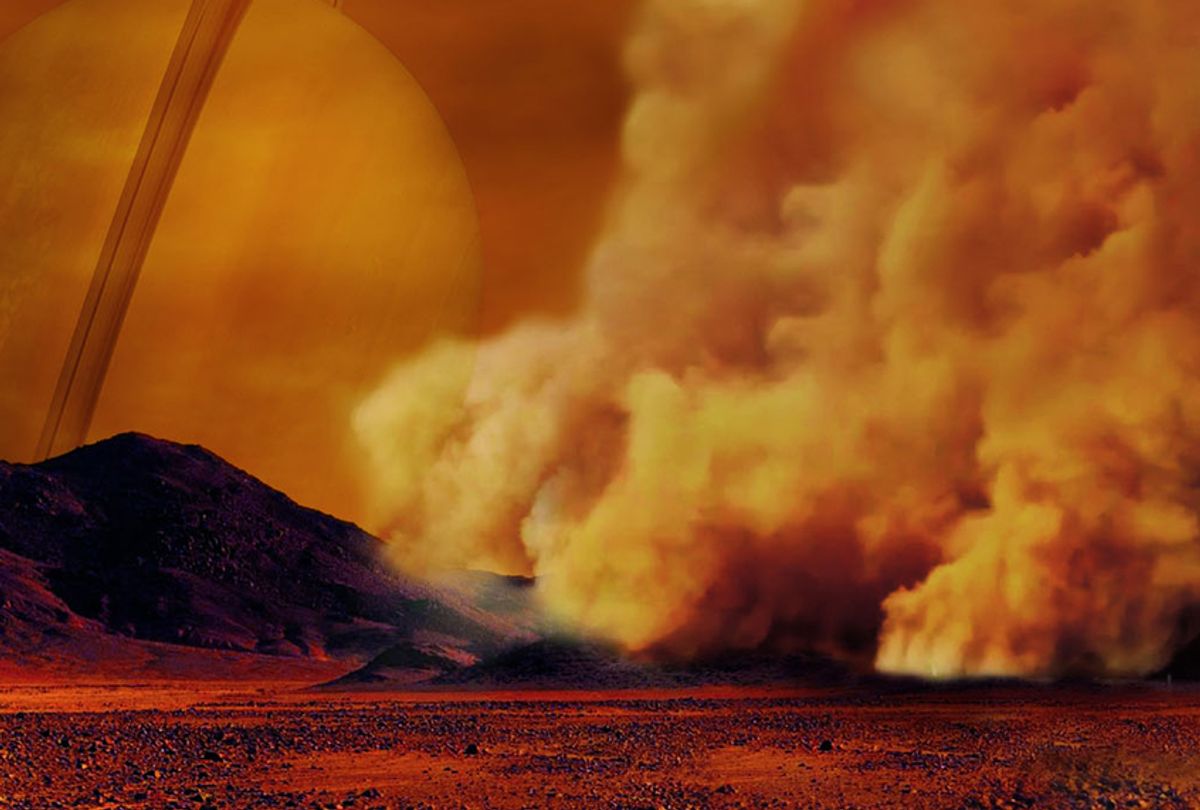 Vast dust storms on Earth, like those that sweep over the Sahara or Arizona, have little analogue in the solar system: only one other world, Mars, is known to have comparable dust storms. That changes today, as a new scientific paper published in Nature Geosciences revealed that dust storms routinely sweep across the surface of Saturn’s large moon Titan.

Pulling data from the Cassini spacecraft, which probed the Saturnian system for 13 years before falling into Saturn’s atmosphere in September 2017, the paper’s co-authors describe how a combination of “Cassini spectral data, radiative transfer modelling and atmospheric simulations” led them to the conclusion that Cassini had observed a massive dust storm on Titan.

“The brightenings [that] originate in the atmosphere are consistent with formation from dust storms composed of micrometre-sized solid organic particles mobilized from underlying dune fields,” the scientists wrote in Nature Geosciences.

Titan has always been an unusual moon. Unlike most of the solar system’s large moons, it has a substantial atmosphere that is largely comprised of nitrogen (like Earth’s). Titan’s atmosphere is slightly denser than Earth’s atmosphere overall, but not so dense that it would crush an astronaut (like Venus’s).  In fact, at 1.45 atmospheres, an astronaut on Titan who was suitably warm could survive with only an air-tight oxygen mask on, with their skin exposed to the atmosphere without discomfort.

Titan’s dense atmosphere is partly to blame for these storms. Obviously, in order for dust to blow around, you need wind, and in order to have wind, you need to have a dense enough atmosphere to kick up solid particulates on the surface. These two components come together more rarely than you might think: Venus has an immensely dense atmosphere, but its surface is so hot there’s probably not much dust that hasn’t been vaporized or melted down to rock. The moon has plenty of silty dirt on its surface, but hardly an atmosphere to speak of (nor wind). The gas giants have thick atmospheres but no solid surface geography with dunes or dirt. Titan, Earth and Mars are in a class of their own.

Scientists had speculated previously that there may be Titanian dust storms; notably, when the Huygens lander touched down on Titan’s surface, the probe observed dust spew up in its wake for several seconds, something that the scientists note in the paper.

The discovery of large-scale dust storms on Titan has implications for all kinds of different scientific fields, from geology and meteorology to geophysics and astrobiology. “Besides Earth and Mars, Titan would thus be the only other body in the Solar System where dust storms and aeolian activity over dune fields have been observed, indicating the complexity of the atmospheric dynamics and atmosphere–surface interactions at play on Saturn’s largest moon,” the scientists note in the paper.

Notably, Titan’s geology may be quite alien compared to Earth’s (or Mars), in part because its lakes and rivers are not comprised of water but rather hydrocarbons like methane and ethane. Like water on Earth, the hydrocarbons on Titan exhibit a similar meteorological cycle, in which they move between being clouds, rain, and bodies of liquid on the surface.

That this discovery was made long after the Cassini probe had disintegrated illustrates how the rich scientific data from these kinds of missions can result in scientific discovery for years to come. Currently, there are no confirmed future missions to Titan, though a proposed mission called “Dragonfly” would land a small drone on the surface, which would fly around and make observations.