2020 Democrats come together to defend Kamala Harris against birtherism attacks

Harris has been the victim of a birtherism attack on social media — retweeted and then deleted by Donald Trump Jr. 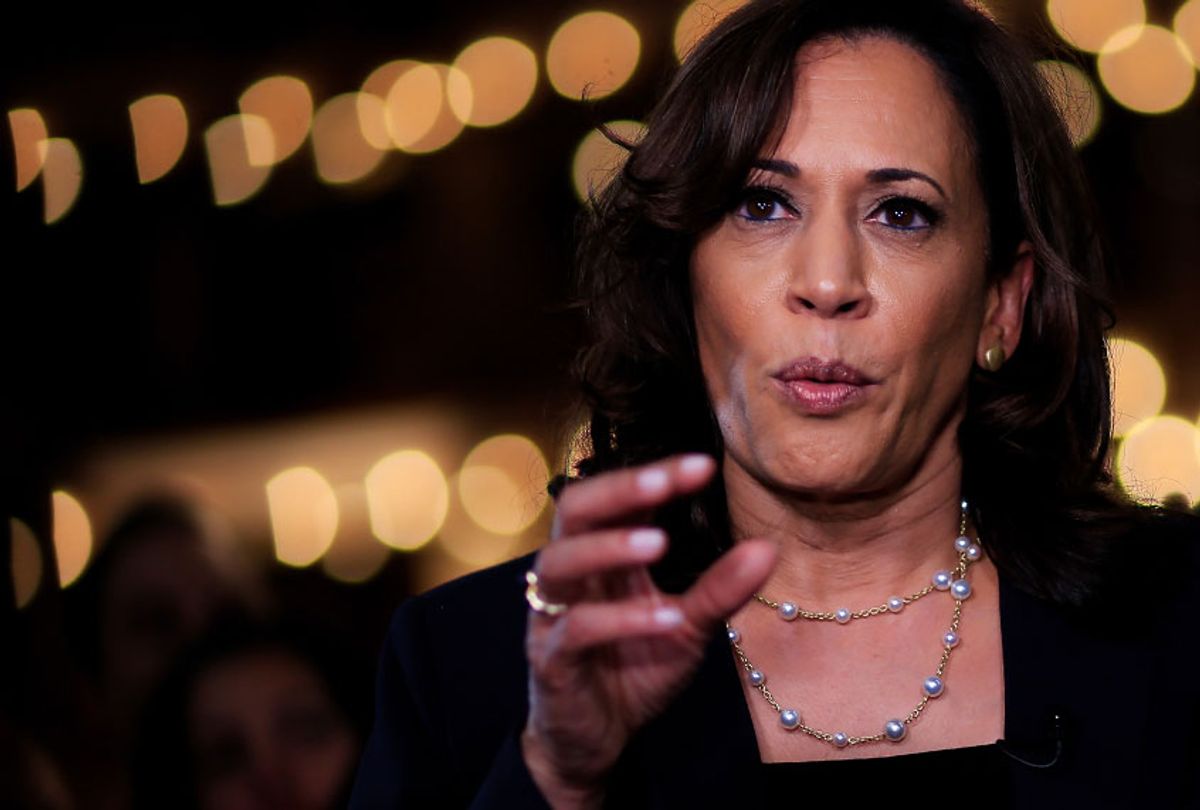 Several candidates vying for the Democratic Party's nomination for president came together over the weekend as they defended rival Sen. Kamala Harris, D-Calif., against a barrage of online attacks on her race.

Former vice president Joe Biden, who clashed with Harris last week at the Democratic primary debate in Miami after the freshman senator confronted him over the issue of race, said the online attacks against Harris were clear echoes of "birtherism."

"The same forces of hatred rooted in 'birtherism' that questioned @BarackObama's American citizenship, and even his racial identity, are now being used against Senator @KamalaHarris," Biden tweeted. "It's disgusting and we have to call it out when we see it. Racism has no place in America."

"Birtherism" is a racist conspiracy theory largely promoted by some Republicans, including President Donald Trump before he clinched the presidency, which absurdly claimed former President Barack Obama was born in Kenya and was thus ineligible to be president.

The familiar attacks were reignited on Thursday after the president's eldest son, Donald Trump Jr., re-shared a post from Ali Alexander, a conservative commentator whose Twitter profile claims to have "exposed Kamala Harris," that alleged: "Kamala Harris is *not* an American Black. She is half Indian and half Jamaican. I'm so sick of people robbing American Blacks (like myself) from our history. It's disgusting."

Don Jr. deleted the post by the end of the night, the New York Times reported. A spokesperson for the eldest Trump son told the newspaper his client's statement had been a misunderstanding.

"Don's tweet was simply him asking if it was true that Kamala Harris was half-Indian because it’s not something he had ever heard before," spokesman Andy Surabian told the Times. "And once he saw that folks were misconstruing the intent of his tweet, he quickly deleted it."

But by then, even though Don Jr. had deleted his tweet, a flurry of accounts began sharing the contents of Alexander's tweet questioning Harris' race.

The attacks against Harris started during Thursday's Democratic presidential debate, after the freshman senator confronted Biden over the issue of race. Harris specifically took aim at Biden for trying to prevent the Department of Education's efforts to enforce school busing to integrate schools in the 1970s. The California Democrat then described the experience of "a little girl in California" who traveled across districts as part of the second class of students bused to integrate the public schools in her county.

"And that little girl was me," an emotional Harris said. "So I will tell you that on this subject, it cannot be an intellectual debate among Democrats. We have to take it seriously. We have to act swiftly."

The exchange between Harris and Biden was seen as a breakthrough for the California Democrat, who has received a surge of support and donations in the wake of her debate performance amid the online attacks.

"The coordinated smear campaign on Senator @KamalaHarris is racist and vile," Inslee tweeted. "The Trump family is peddling birtherism again and it's incumbent on all of us to speak out against it."

Lily Adams, the campaign communications director for Harris, dismissed the attacks in an interview with CNN.

"This is the same type of racist attack his father used to attack Barack Obama," Adams told the news outlet. "It didn't work then and it won't work now."

Harris, who was born in Oakland, Calif. to an Indian mother and Jamaican father, has previously confronted critics who have questioned her race, her prosecutorial record incarcerating minorities and her decision to marry a white man.

In an interview with the Breakfast Club hosts DJ Envy and Charlamagne Tha God which aired in March, the show's hosts asked Harris to respond to a series of disparaging memes that have been circulated on social media. Charlamagne Tha God cited a meme that said Harris is "not African-American," because her parents were immigrants from India and Jamaica and she spent her high school years in Canada.

"So I was born in Oakland and raised in the United States except for the years that I was in high school in Montreal, Canada," Harris responded with a laugh. "And look, this is the same thing they did to Barack (Obama). This is not new to us and so I think that we know what they are trying to do."

"They are trying to do what has been happening over the last two years, which is powerful voices trying to sow hate and division, and so we need to recognize when we're being played," Harris continued.

Charlamagne Tha God followed up by asking Harris how she addresses questions about "the legitimacy of your blackness."

"I think they don't understand who black people are," Harris answered, referring to critics.

"I'm black, and I'm proud of being black," Harris said at a later point in the interview. "I was born black. I will die black, and I'm not going to make excuses for anybody, because they don't understand."