"Angry" Rex Tillerson to Congress: Jared Kushner went behind my back on foreign policy 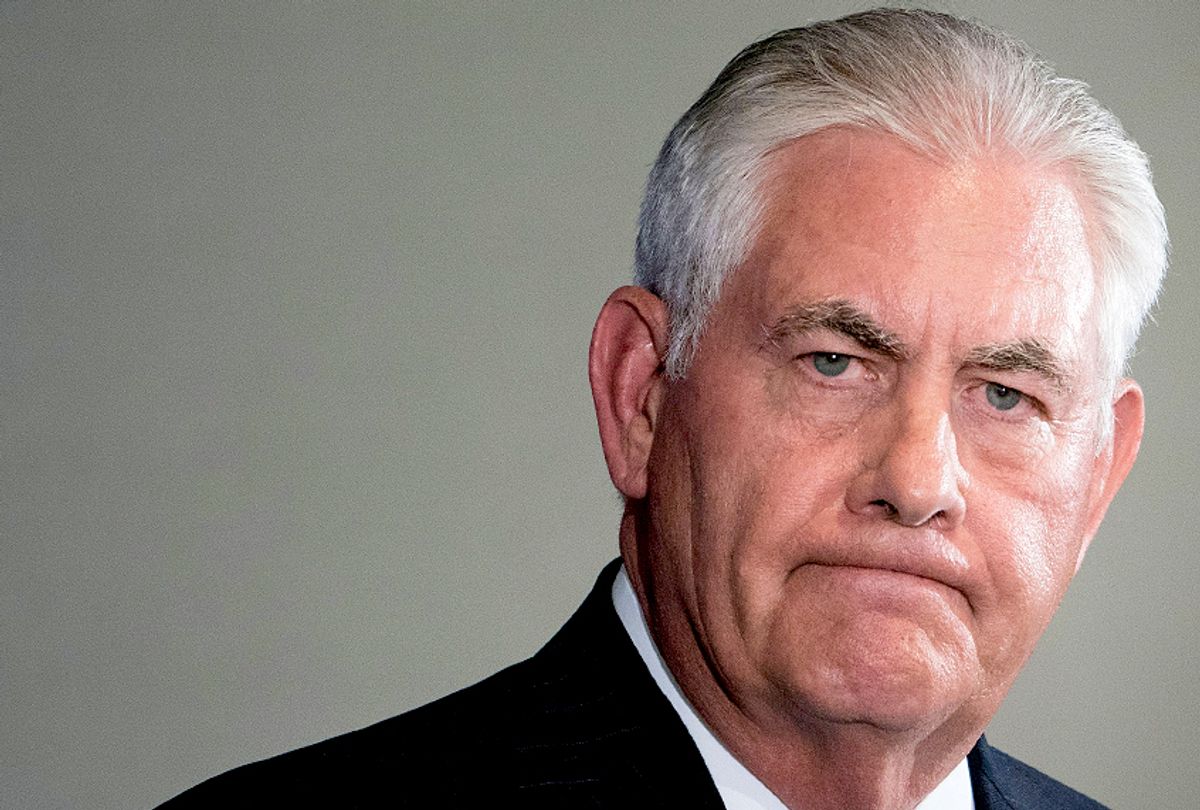 Tillerson told the House Foreign Affairs Committee last month that he was left “angry” after Kushner kept him in the dark while conducting his own meetings with foreign officials, according to a transcript of Tillerson's seven-hour testimony published by the Washington Post.

Tillerson told the committee that one of the “challenges” that “everyone had” in the Trump administration was “to learn to deal with ... the unique situation with the president’s son-in-law [Kushner] and daughter [Ivanka] being part of the White House advisory team.”

“There was not a real clear understanding of the role, responsibilities, authorities … which made it challenging for everyone, I think, in terms of how to deal with activities that might be undertaken by others that were not defined within the national-security process itself,” he explained.

Asked if he could name any instances in which Kushner had secret meetings behind his back, Tillerson said that “Mexico was a situation that occurred on a number of occasions.”

“The [Mexican] foreign secretary came to town — unbeknownst to me — and I happened to be having a business dinner at a restaurant in town,” Tillerson said. “And the owner of the restaurant, proprietor of the restaurant, came around and said, ‘Oh, Mr. Secretary, you might be interested to know the foreign secretary of Mexico is seated at a table near the back, in case you want to go by and say hello to him.’ Very innocent on his part.”

“I could see the color go out of the face of the foreign secretary of Mexico as I very — I smiled big, and I said, ‘Welcome to Washington,’ and I said, ‘I don’t want to interrupt what y’all are doing.’ I said, ‘Give me a call next time you’re coming to town. And I left it at that,” he said.

Tillerson said that the Mexican foreign secretary was “rather shocked” to learn Kushner was operating on his own because he believed that “everything he was talking to Mr. Kushner about had been run through the State Department and that I was fully on board with it.”

In another instance, Tillerson told the committee that Kushner failed to tell either the State or Defense departments about a blockade against Qatar that began in the spring of 2017.

“I was surprised,” Tillerson said. “Someone slipped me a message, and it just was a very short note … and I slipped it to [Defense] Secretary Mattis. We waited for the next scheduled break and then we went out and made some calls to find out what was going on. At the time, I think both Secretary Mattis and I both felt … that someone would have called us and told us.”

Tillerson said he was forced to manage the fallout from the blockade without knowing all the details.

“I didn’t have enough information to know if something had really set this off or an event that hadn’t been reported,” he said.

During the testimony, the committee informed Tillerson that it had learned of a private dinner between Kushner and former White House strategist Steve Bannon at which they were told about the blockade.

“It makes me angry,” Tillerson said. “I didn’t have a say. The State Department’s views were never expressed.”

The former secretary of state and ExxonMobil CEO recalled another instance when the State Department was unaware that Kushner was working with Saudi officials on a “comprehensive” plan for a strategic relationship.

Tillerson said that Kushner “would make trips abroad and usually, you know, kind of was in charge of his own agenda. And typically not a lot of coordination with the embassy.”

The White House denied that Kushner had done anything wrong.

“Jared consistently follows proper protocols,” White House spokesman Hogan Gidley told The Daily Beast. “The alleged dinner to supposedly discuss the blockade never happened, and no one in the White House was involved in the blockade. Moreover, Mr. Kushner’s work with Mexico had led to positive results on trade and other issues.”

But Tillerson said he raised the issue with the White House and Kushner “said he would try to do better.” Tillerson added that in reality, “not much changed.”

Kushner’s shadow diplomacy was just one aspects of working for the Trump administration that irked Tillerson during his brief tenure at the State Department. The other was Trump's ignorance.

“The president was on a steep learning curve,” Tillerson said. “He didn’t know a lot of the legal aspects of the immigration laws or certainly other aspects of how the government operates within the congressional lawmaking system and oversight.”

Tillerson said he tried to explain important issues to Trump, but that the president was not keen on deep dives and long memos. “That’s just not what he was going to do,” Tillerson said.

“I learned to be much more concise with what I wanted to bring in front of him,” he added.