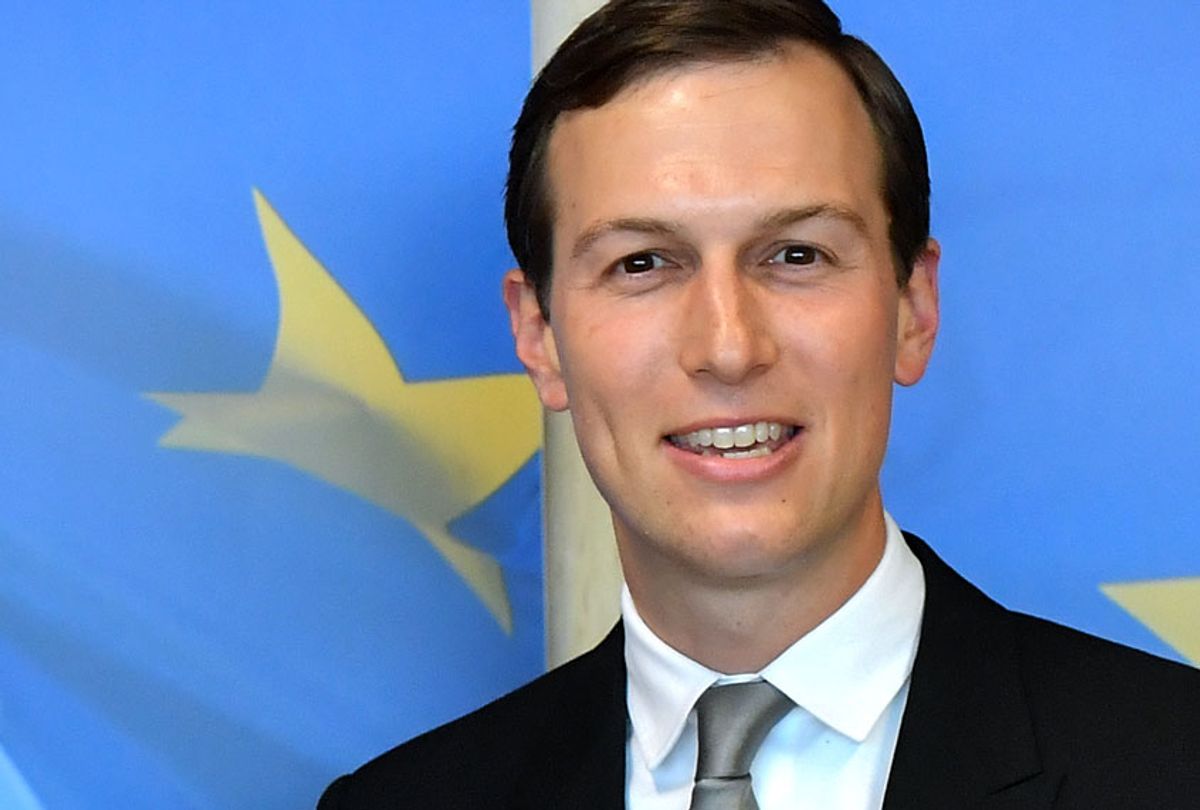 Senior Advisor to the US President Jared Kushner (Getty/EMMANUEL DUNAND)
--

A real estate firm owned in part by Jared Kushner reportedly received $90 million in foreign funding from "an opaque offshore vehicle" after the son-in-law of President Donald Trump began working as a senior adviser at the White House.

The company in question, Cadre, has received overseas investments while Kushner "through a vehicle run by Goldman Sachs in the Cayman Islands," according to the Guardian. Although Kushner sold other assets after beginning his employment at the White House, financial disclosures indicate that he maintained his stake in Cadre, which is now worth as much as $50 million.

Because much is unknown about the nature of who has been investing in Cadre, experts have raised concerns that Kushner's interest in the company could interfere with his ability to impartially represent America's best interests in geopolitical situations. During his time in the White House, Kushner has taken a lead on foreign policy initiatives, including a well-publicized attempt to broker peace in the Middle East.

"The conflicts that have swirled around Jared Kushner have only grown more distressing with time," Harvard Law School professor Laurence Tribe told Salon by email.

"Besides being the president’s son-in-law, he is a scion of a family, whose wealth is intertwined with Jared’s many roles in the Trump administration, roles that have put him virtually in bed with, among other bloody despots, Saudi Crown Prince MBS, with whom Jared hobnobbed right after MBS sent a team of thugs to brutally torture, murder and dismember a Washington Post critic of the Saudi regime. It would take a long time to enumerate the conflicts we know about. Those we don’t yet know about are neatly hidden away in the Cadre company, in which Kushner apparently has holdings valued at as much as $50 million."

While Cadre declined to comment on the record with the Guardian, a spokesman for Goldman Sachs said, "Cadre does not have access to any information about the Goldman Sachs clients who have invested in these vehicles."

The mysterious nature of these conflicts makes it impossible for American citizens to determine what drives the decisions being made in the White House, according to Tribe.

"The point of these conflicts, hidden and otherwise, is that they make it impossible for the American people to know which recommendations Jared whispers into the ears of his ill-informed father-in-law — who happens to be president of the United States — are driven by loyalty to the interests of the United States, and which are driven instead by loyalty to the Trump-Kushner criminal enterprise — a phrase I use reluctantly and sadly, but advisedly."

As Tribe revealed, this is not the first time that Kushner's fitness to serve as a foreign policy aide has been called into question. In April, it was revealed that Kushner was "Senior White House Official 1" from a memo released by the House Oversight Committee based on a whistleblower's report, which pulled back the curtain on how national security clearances were granted at the White House.

The memo read, "In the case of Senior White House Official 1, the Director of the Personnel Security Office, Mr. Kline, overruled the determination by Ms. Newbold and the first-line adjudicator. Ms. Newbold informed Committee staff that if Mr. Kline wanted to favorably adjudicate the application, he should have noted in the file how he had considered and mitigated concerns with each of the disqualifying factors, but he merely noted in the file that 'the activities occurred prior to Federal service.'"

In response to the reports about his national security clearance issues, Kushner told Fox News' Laura Ingraham, "I can say over the last two years that I’ve been here, I’ve been accused of all different types of things, and all of those things have turned out to be false."

Another high profile example of an occasion when Kushner's alleged conflicts of interest could have influenced American foreign policy. In 2018, it was reported that Kushner Cos. allegedly asked Qatar on a number of occasions about investing in the company's 666 Fifth Avenue property. In May 2017, one month after Kushner himself was accused of directly asking Qatari Finance Minister Ali Sherif al-Emadi for assistance with the building, the U.S. backed Saudi Arabia and the United Arab Emirates in its blockade of Qatar.

"Of course the American people have a right, legal as well as moral, not only to know about these potential conflicts of interest but also to see them visibly and totally ended," Tribe told Salon. "As an executive official in Trump’s White House, Jared Kushner — and, for that matter, his wife, first daughter Ivanka — is bound to obey the Foreign Emoluments Clause, a basic constitutional safeguard written into Article I, Section 9 against the flow of financial benefits ('Emolument[s] of any kind whatever') from foreign powers— even friendly powers, but surely those who are anything but true friends to America — to officers of the U.S. government 'without the Consent of the Congress.'"