“Her actions show she doesn’t believe all human beings are worthy of basic dignity,” Ocasio-Cortez says of Conway 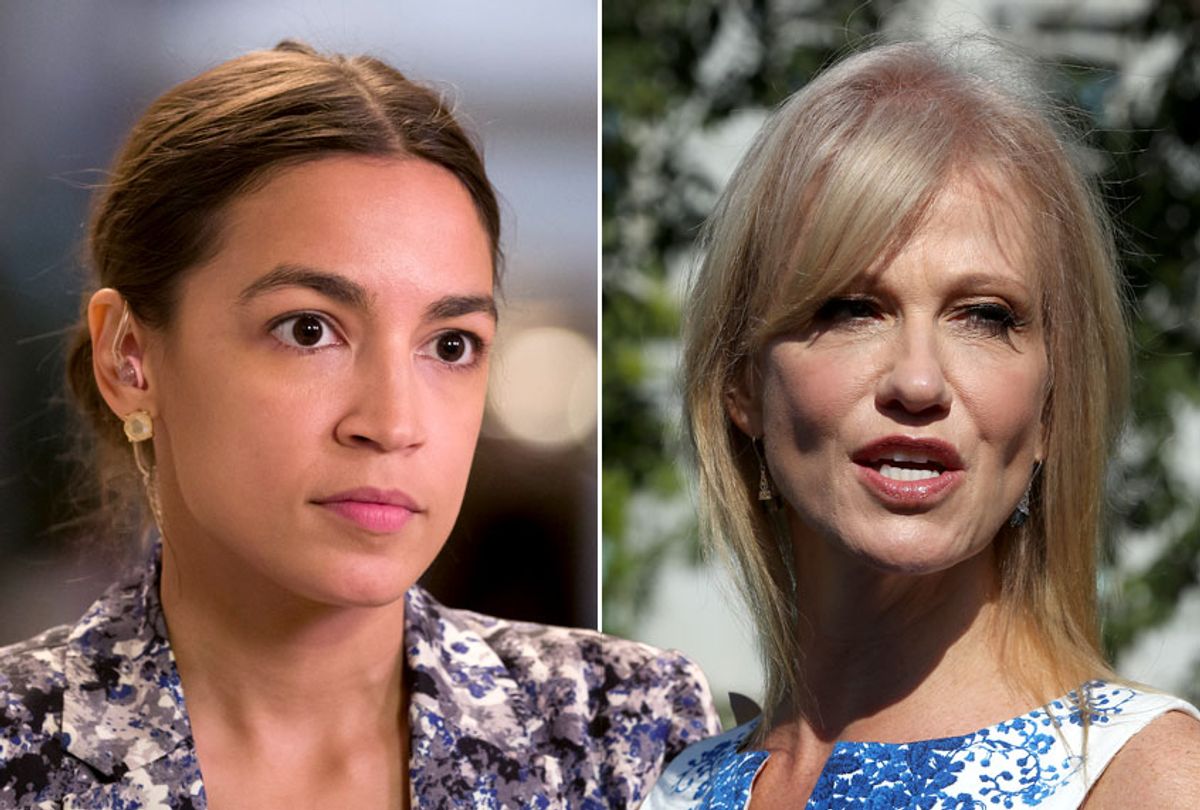 White House counselor Kellyanne Conway is in the middle of a heated war of words with Rep. Alexandria Ocasio-Cortez, D-N.Y., about the conditions at migrant detention centers along the southern border.

"How many migrant women has Kellyanne Conway touched? Hugged? Sat on a concrete floor with? Actually listened to?" Ocasio-Cortez asked in a tweet.

She later added, "The answer is none. Her actions show she doesn’t believe all human beings are worthy of basic dignity. That‘s why she defends & muddies the clear and indefensible."

Conway replied with a tweet that accused Ocasio-Cortez of being all talk and no action.

"How many migrant women did @AOC help by voting AGAINST the $4.6 billion bipartisan humanitarian aid that is FOR THEM?" Conway wrote. "(She even voted against the Democrat aid package). All talk, no dollars."

During a visit to the facilities earlier this week, Ocasio-Cortez expressed horror at the squalid living conditions, describing “people drinking out of toilets” and accounts of “psychological warfare.”

"Just left the 1st CBP facility. I see why CBP officers were being so physically &sexually threatening towards me," Rep. Alexandria Ocasio-Cortez, D-N.Y., tweeted on Monday. "Officers were keeping women in cells w/ no water & had told them to drink out of the toilets. This was them on their GOOD behavior in front of members of Congress."

She later added, "Now I’ve seen the inside of these facilities. It’s not just the kids. It’s everyone. People drinking out of toilets, officers laughing in front of members Congress. I brought it up to their superiors. They said 'officers are under stress & act out sometimes.' No accountability."

In a two-tweet thread, Ocasio-Cortez also wrote, "After I forced myself into a cell w/ women&began speaking to them, one of them described their treatment at the hands of officers as 'psychological warfare' - waking them at odd hours for no reason, calling them wh*res, etc. Tell me what about that is due to a 'lack of funding?'"

She added, "Now I’m on my way to Clint, where the Trump admin was denying children toothpaste and soap. This has been horrifying so far. It is hard to understate the enormity of the problem. We’re talking systemic cruelty w/ a dehumanizing culture that treats them like animals."

It was also revealed earlier this week, through a ProPublica report, that border patrol agents had created a Facebook group which included violently racist, sexist and xenophobic content. The content included a photoshopped picture of Ocasio-Cortez being forced to perform oral sex on President Donald Trump, a threat to throw a "burrito at these bitches" (in reference to visiting members of the Congressional Hispanic Caucus) and reference to the bodies of migrants who were found in bodies of water attempting to enter the U.S. as "floaters." One patrol supervisor wrote "f*ck the hoes," while another said "there should be no photo ops for these scum buckets."