"National Treasure" is not high art. But Nic Cage can help you escape the reality of this Independence Day 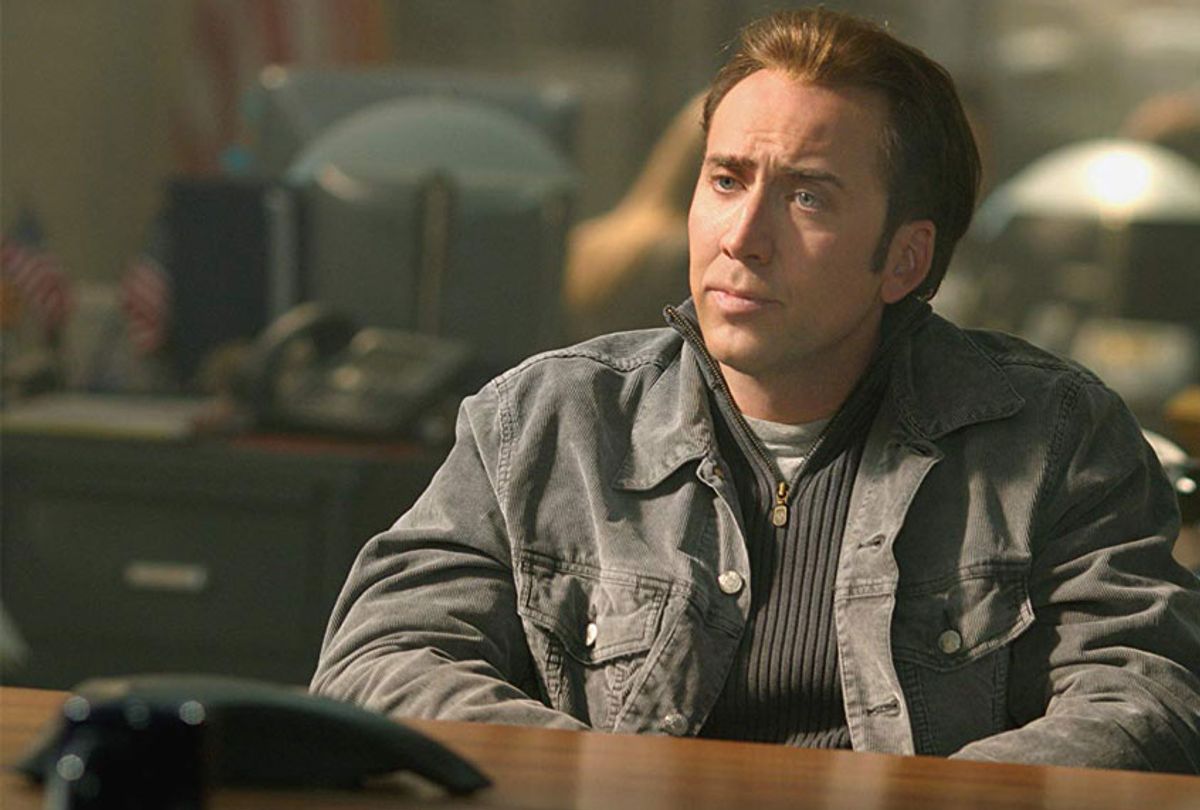 Two years ago, I wrote a retrospective on the musical drama film "1776," a delightful and underrated classic that tells the story of the signing of America's Declaration of Independence. Although the 1972 movie wasn't particularly accurate about its history, it did get the broad strokes right, and managed to pull off the deft feat of being simultaneously educational and entertaining.

While "National Treasure," the 2004 cult classic being discussed here, is definitely entertaining, it is far from educational (at least in terms of its basic plot; it includes many little bits of interesting, and accurate, historical trivia). Indeed, the premise is so goofy that it almost reads like a parody of a brainless patriotic blockbuster rather than a real movie. Yet it is a definitely guilty pleasure, and 90 percent of the reason why can be summed up in two words: Nicolas Cage.

First, though, the story: "National Treasure" claims that an ancient treasure which had been protected by the Knights Templar was squirreled away by those Founding Fathers who also happened to be Freemasons and hidden somewhere in the United States. To protect its location, the Founding Fathers left a series of riddles and clues, with eccentric scholars like historian and cryptologist Benjamin Franklin Gates (Cage) devoting their careers to solving the puzzle and discovering the treasure. One of those clues involves a secret map on the back of the Declaration of Independence.

There are a number of things about this premise that are laughable. Why would the Founding Fathers, Freemasons or not, be entrusted with such a priceless treasure (bear in mind that, from the perspective of denizens of the late-18th century, they were unwashed traitors against the world's largest empire, not future living gods in the making)? If they wanted to conceal its identity until the right person came along to find it, why would they do so by leaving clues — a method that could result in anyone with enough brain power and perseverance to locate it (including the British army), not necessarily someone morally worthy? For that matter, how did they transport such a massive treasure to its eventual hiding place without anyone noticing, much less keeping records? How did they even have the time to undergo such a massive undertaking when they were, you know, trying to form a new nation first by rebelling against the British Empire and then establishing a successful democratic government?

These are just a few of the many questions raised by the ludicrous backstory used in "National Treasure" — but, in a way, the absurdity of the concept works to the film's favor. It is so brainless, so completely out of touch with historical reality, that it becomes weirdly endearing. Helping matters is the fact that director Jon Turteltaub and co-writers Jim Kouf, Cormac Wibberley, Marianne Wibberley, Oren Aviv and Charles Segars treat their subject with complete seriousness. Side characters like Gates' father Patrick Henry Gates (Jon Voight) and love interest Dr. Abigail Chase (Diane Kruger) scoff at his kooky beliefs, but only so the plot will later correct them and force them to praise Gates for having been right all along. The same is true for the various tertiary personalities who show up to raise an eyebrow or be mystified by Gates' words and actions. In a deliberately campy film, the silliness of the story — both its underlying concept and how events proceed in the plot — would be rubbed in our faces. "National Treasure," knowingly or otherwise, makes for great camp because none of its dumber elements seem to realize that they're dumb.

In short: This is a movie in which the creators said "I love America" and "I love treasure hunting adventures," decided to combine the two, and saw nothing at all mad about doing so. If anything, they think you're mad for not seeing why this is awesome. And while the resulting movie may be brainless, the sheer gusto with which it goes about telling its madcap story actually does become pretty awesome in its own way.

Which brings us to Cage. There are a lot of great performances here — Voight and Kruger, Justin Bartha as Gates' wisecracking assistant Riley Poole, Sean Bean as the sleazy villain Ian Howe, Harvey Keitel as the FBI Agent pursuing Gates and secretly has a heart of gold — but Cage is the movie's star, in more ways than one. Not only does he play the central character, but his iconic tics and quirks are perfectly suited to this material. A more traditional movie star — someone muscle-bound and traditionally handsome, competent and stoical — would have brought a movie this preposterous to its knees. When you're telling a wild story, though, you need a wild lead to make it work.

Take the scene where Gates steals the Declaration of Independence to protect it from Howe. If I were to simply explain that he comforts Kruger's character, a National Archives official unwillingly dragged into the heist, by asking if she's hungry and requesting that she "be a little more civilized," the humor of the scene would be lost. Same goes when Gates quotes a line from the Declaration of Independence or tells an anecdote about Thomas Edison in order to introduce the next part of his plan to find the treasure (the history lessons he provides always have absolutely no logical connection to whatever his next step is going to be). Or any scene where Gates prattles on about the giant conspiracy behind the treasure's origin, with an earnestness that might convince less discerning audience members that they're learning about real history. Cage is a man who can make any conspiracy theory sound compelling. This isn't the same thing as logically sound, but a popcorn flick needs to be fun, and Cage's version of compelling is a lot of fun.

The key to enjoying these scenes comes from not their actual contents, but from the characteristic idiosyncrasies that Cage brings to all of his performances. There is an intensity to Cage's delivery and mannerisms, a sheer joy in the seriousness with which he delivers the most cringe-inducing lines and realizes the most trite plot cliches, that it's impossible not to find him entertaining. He is the cheese-filled sun in a solar system that would fly apart if anything other than the highest grade cheese was at its center. As with any Cage performance, it cannot be described in words, but must be seen to be believed.

To be clear, this isn't his most memorable role (for instance, he has funnier moments in "National Treasure: Book of Secrets," which was qualitatively equal to this film but not 4th of July-themed, and doesn't hold a candle to "The Wicker Man" or "Vampire's Kiss"). It is, however, pretty much exactly what you would expect if you asked a computer to create a perfect Nicolas Cage adventure film based around Independence Day. It is also why, as far as 4th of July movies go, "National Treasure" belongs up there with the best. It isn't a great movie itself, but it has all of the elements that one can associate with the dumbest yet most fun aspects of our holiday — the worshiping of the Founding Fathers, the bizarrely wrong view of history, the American spirit of going out and finding that there treasure — and these make it as re-watchable a 4th of July movie as any classic like "1776."