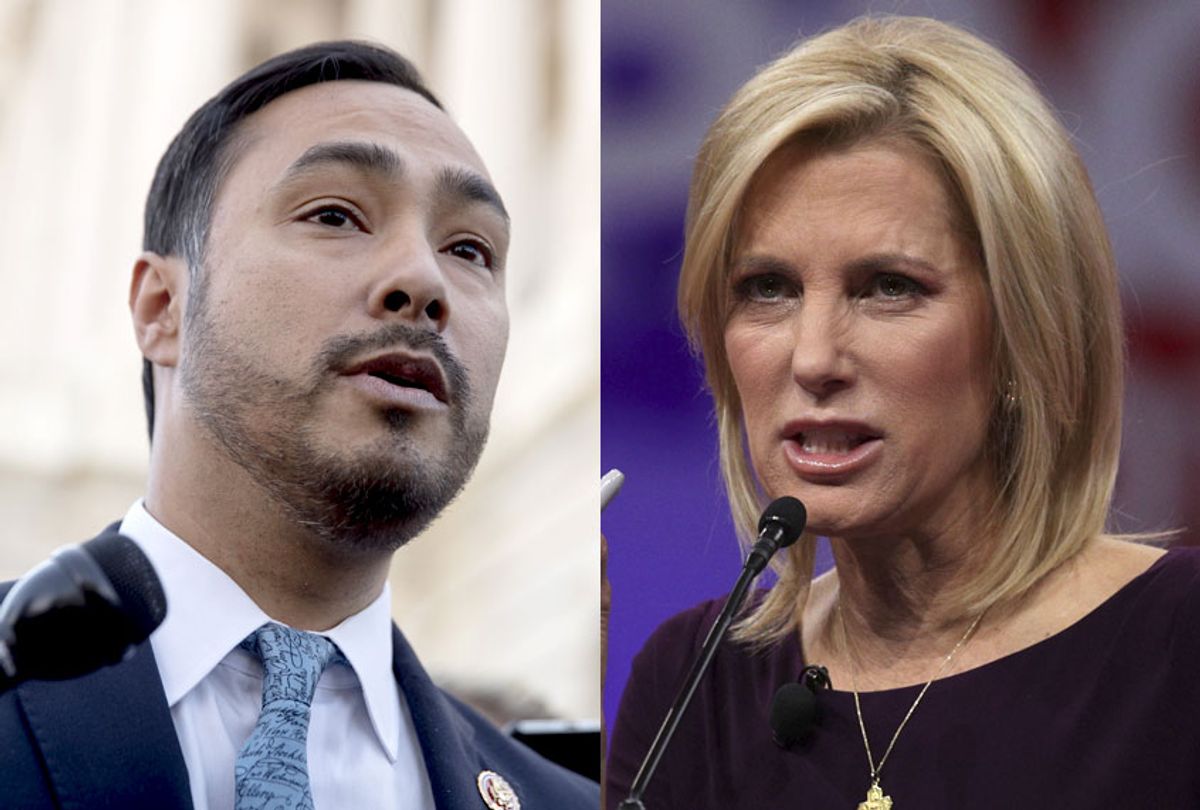 Rep. Joaquin Castro, D-Texas, called Fox News host Laura Ingraham a "white supremacist" on Wednesday during a heated back-and-forth with the conservative pundit over conditions at migrant detention facilities near the U.S.-Mexico border.

The feud erupted on Twitter over pictures and videos Castro shared on the social media platform of the facilities operated by the U.S. Customs and Border Protection (CBP), where thousands of undocumented immigrants and asylum seekers are being held in custody.

Castro, the twin brother of Democratic presidential candidate Julián Castro and the chairman of the Congressional Hispanic Caucus, shared a surreptitiously recorded video of conditions inside migrant detention centers.

One video showed several women wrapped in sleeping bags and sitting on a concrete floor at a facility in El Paso, Texas. One woman could be heard saying she did not have medicine.

"This moment captures what it's like for women in CBP custody to share a cramped cell—some held for 50 days—for them to be denied showers for up to 15 days and life-saving medication," Castro tweeted. "For some, it also means being separated from their children. This is El Paso Border Station #1."

Another video depicted a shower at a border patrol station in Clint, Texas, which has come under intense scrutiny for the treatment of children held there.

Ingraham re-posted Castro's clip of the showers at the detention centers, which she described as "similar to Army facilities in Iraq I saw (and used) visiting Camp Victory & Balad. Think @JoaquinCastrotx needs to spend more time overseas w/ our troops bef[ore] he calls this inhuman."

Castro responded three hours later by calling Ingraham a "white supremacist" and condemning her comparison of the facilities.

"I don't think refugees should be kept in war-zone conditions in the most prosperous nation on earth," he added.

Ingraham has previously faced backlash for her anti-immigrant statements. In June, she described detention facilities used to house migrant children separated from their parents as "essentially like summer camps," likening the facilities to "boarding schools." She also compared the a surge in border crossings to a "slow-rolling invasion of the United States."

The exchange between Castro and Ingraham earlier this week comes as the Trump administration faces mounting criticism from lawmakers and the public over conditions at migrant detention centers near the nation's southern border.

Earlier this week, a report from the Department of Homeland Security's internal watchdog found "dangerous overcrowding" and "prolonged detention of children and adults" at facilities in the Rio Grande Valley.

In a letter to acting Homeland Security Secretary Kevin McAleenan, the office urged the agency to "take immediate steps to alleviate" the situation.

Pictures included in the report show migrants at the facilities crowded behind fences and sleeping on the concrete floor with aluminum blankets.

Children at three of the five facilities had no access to showers and limited access to a change of clothes. Two facilities had not provided children access to hot meals, another requirement under CBP standards. Some adults at the facilities were held in standing-room-only conditions for a week and at another, some were held more than a month in overcrowded cells.

"We are concerned that overcrowding and prolonged detention represent an immediate risk to the health and safety of DHS agents and officers and to those detained," inspectors wrote in the report.

Castro was one of the many lawmakers from the Congressional Hispanic Caucus to visit some detention facilities earlier this week. After his visit, the congressman called America's border patrol system "broken."

"And part of the reason it stays broken is because it's kept secret. The American people must see what is being carried out in their name," Castro tweeted, before sharing what the group learned during its visit.

The lawmaker said women were "crammed into a prison-like cell with one toilet, but no running water to drink from or wash their hands with” at a facility in El Paso, Texas. Many of those women, he said, "had not bathed for 15 days."

"Some had been separated from children, some had been held for more than 50 days. Several complained they had not received their medications, including one for epilepsy," he added.

"All Americans must help to change this system," Castro wrote on Twitter, alongside a picture of migrant women.