Former admissions official describes how Donald Trump got into Wharton: "It was not very difficult"

"I certainly was not struck by any sense that I’m sitting before a genius," James Nolan recalled of Trump 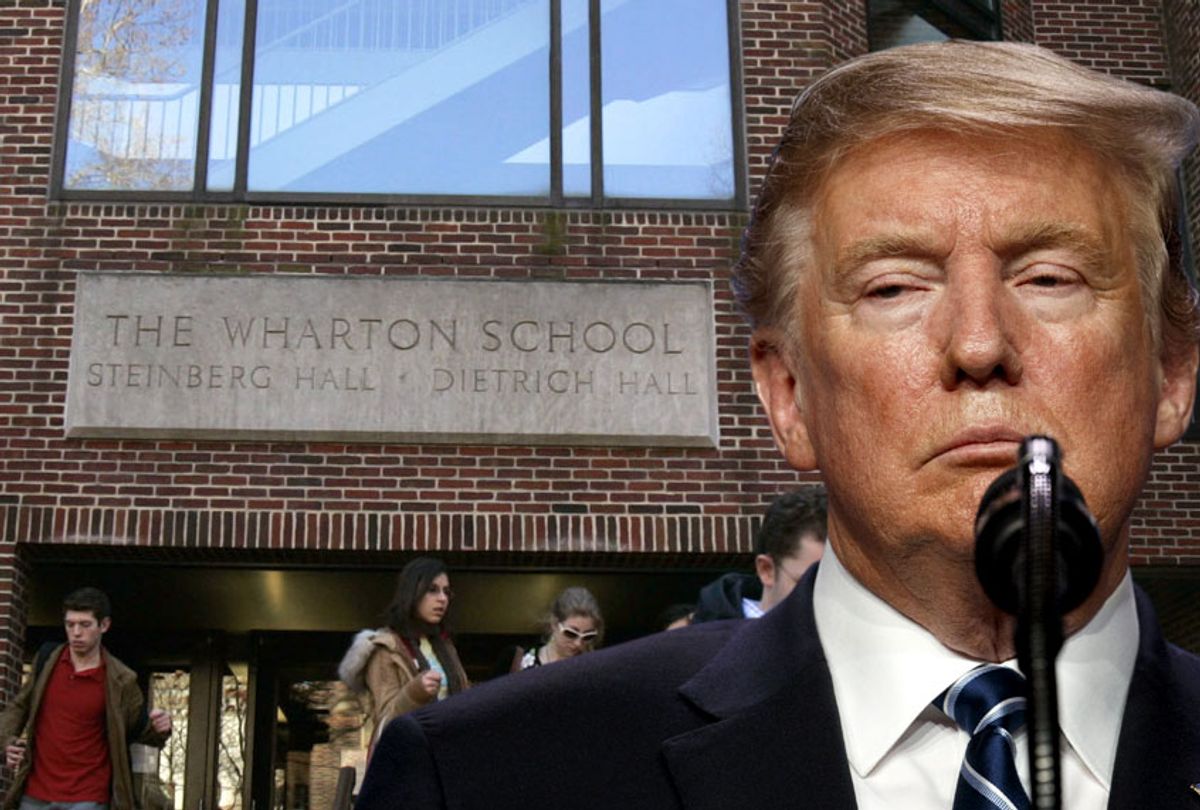 President Donald Trump likes to boast of his Ivy League credentials and being a self-proclaimed "extremely stable genius," but a new report reveals that his time at the University of Pennsylvania's Wharton School for business was not marked by such smarts.

For decades, Trump has cited his attendance at what was then called the Wharton School of Finance as evidence of his intellect. He has said he went to “the hardest school to get into, the best school in the world,” calling it “super genius stuff.” Last month, President Trump pointed to his studies there as he awarded the Presidential Medal of Freedom to conservative economist Arthur Laffer.

"It was not very difficult," James Nolan, a former admissions officer at the University of Pennsylvania, recalled to the Post of admissions in the '60s.

"I certainly was not struck by any sense that I’m sitting before a genius," he added of his interview with Trump. "Certainly not a super genius."

Nolan said he was the sole admissions officer who spoke directly with Trump. Although he could not recall the admissions rating he gave to the future president, he conceded that "it must have been decent enough to support his candidacy."

At the same time, Wharton was not as competitive in 1966 as it is today. Nolan told the Post that more than half of all applicants were accepted — and that rate was even higher for transfer students like Trump. In contrast, the admissions rate in 2019 for the incoming class at the University of Pennsylvania was 7.4 percent.

While Trump's exact academic records at the University of Pennsylvania are not known, he was reportedly not listed among the top honorees at the university's commencement and his name did not appear on the dean's list, which would have indicated he was among the top 56 students in his graduating class of 366. The Post went into detail about how some of Trump's classmates recall him as a less than impressive student:

Yet Trump is remembered by some classmates as a middling student.

Louis Calomaris, who spent considerable time with Trump during real estate classes, said in an interview that he headed a weekly study group. Trump had attended two or three of the study sessions when, one day in class, the professor announced that the most important thing was to attend his lectures.

“Out of the corner of my eye, I see Trump close his book. And he never came to another study group, but he never missed class,” Calomaris said.

A biography of Trump from 1985 drew a similar conclusion:

In a 1985 biography of Trump, Jerome Tuccille wrote that Trump hardly viewed his attendance as a priority.

“Donald agreed to attend Wharton for his father’s sake,” Tuccille wrote. “He showed up for classes and did what was required of him but he was clearly bored and spent a lot of time on outside business activities.”

The future president began generously donating to the University of Pennsylvania right around the time that Donald Trump Jr. began classes there in 1996 and Ivanka Trump began doing so in 2000, although records are unclear as to the exact amount he gave during that period. Trump followed a precedent that had been used on his own behalf. While it is not clear if his father donated to the University as he was seeking admission, Trump biographer Gwenda Blair wrote in 2001 that the future president was only able to obtain the transfer from after being interviewed by Nolan, who was friendly with Trump's wealthy older brother, Freddy.

Similarly, Jared Kushner — Trump's future son-in-law — was notoriously admitted to Harvard University despite having a low GPA and low SAT scores, prompting one former official at his erstwhile private school to remark that "it was a little bit disappointing, because there were at the time other kids we thought should really get in on the merits — and they did not."