In her announcement, McGrath describes what happened when she wrote a letter to McConnell at 13 years old 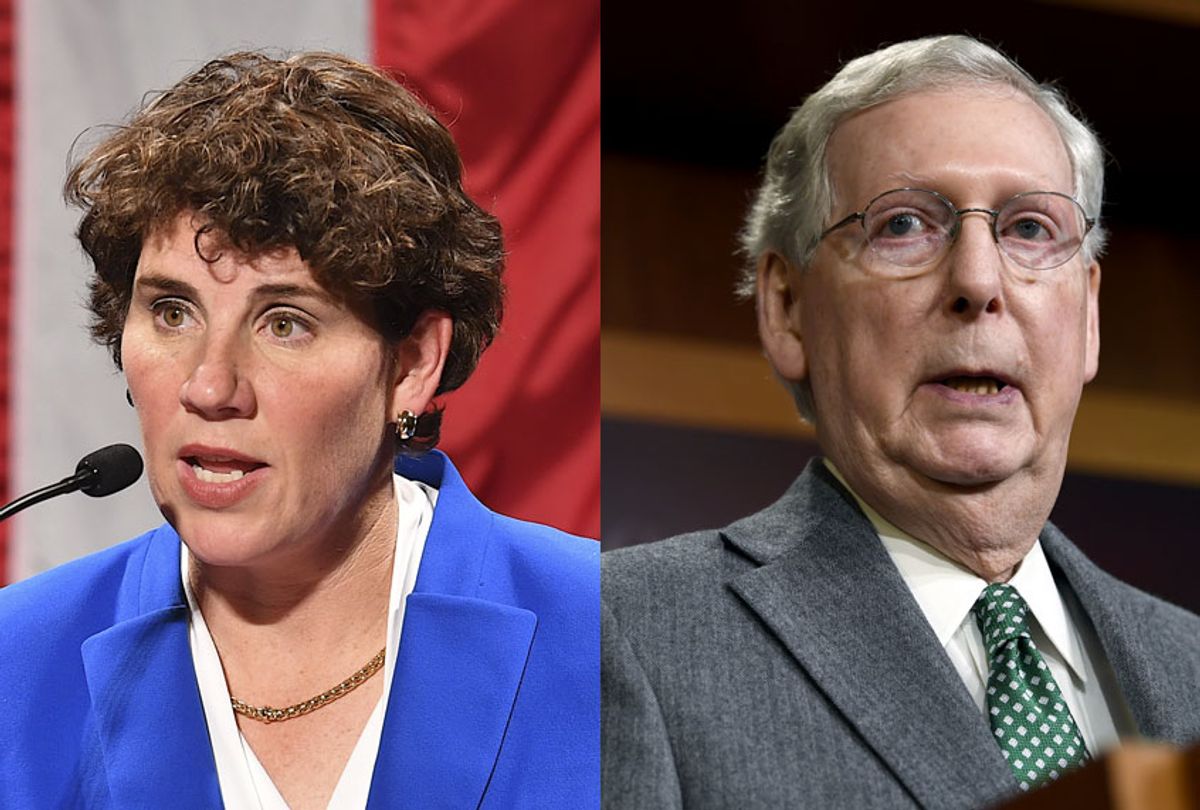 Amy McGrath, a former fighter pilot and the first woman to fly in an F/A-18 in a combat mission for the U.S. Marines, announced Tuesday that she is mounting a challenge for the Senate seat held for decades by the powerful incumbent Majority Leader Mitch McConnell.

In the video announcing her 2020 campaign, McGrath described how she wrote a letter to McConnell when she was 13 years old describing her ambition to become a fighter pilot and asserting her belief that women should be able to fight for their country — only to never receive a reply.

"I've often wondered how many other people did Mitch McConnell never take the time to write back or even think about?" McGrath asked.

She then reviewed the stories of "a woman suffering from diabetes who fears losing her health care and coverage for her pre-existing condition; a coal miner forced to retire by black lung disease, who's looking for someone to offer more than words; a student, who can only afford college as long as she can get her federal loans and has no idea how she'll pay off her debt."

As McGrath described their stories, the video identified those Kentuckians as Ann Young from Bourbon County, Jimmy Guess from Johnson County and Kendall Russell from Jefferson County. She then argued that McConnell had "bit by bit, year by year, turned Washington into something we all despise.”

"I'm running for Senate, because it shouldn't be like this,” she added.

Although McGrath garnered celebrity during the 2018 congressional elections after a biographical video celebrating her accomplishments went viral, she ultimately lost her House race against Rep. Andy Barr by a narrow margin of 3 points. She is likely to face an equally uphill battle as she mounts a bid for Senate in a state that President Donald Trump won by nearly 30 points in 2016; his name will be back on the ballot on Election Day in 2020.

McConnell campaign manager Kevin Golden told CNN that "McGrath lost her only race in a Democratic-wave election, because she is an extreme liberal who is far out of touch with Kentuckians. Comparing President Trump's election to 9/11, endorsing a government takeover of healthcare and calling the wall 'stupid' is a heck of a platform that we will be delighted to discuss over the next 16 months."

At the same time, McGrath's race against Barr was surprisingly close, with the New York Times considering it to be a dead heat shortly before the election and McGrath holding Barr to a much closer margin than his previous Democratic opponent, who had been trounced by 22 points. McGrath could also benefit from McConnell's abysmal approval ratings in Kentucky, with a recent Morning Consult poll showing the senator with a 36 percent approval and 50 percent disapproval rating in his home state.

Speaking to Salon last year on "Salon Talks," McGrath described how she was "hugely disappointed" by McConnell's Senate record.

"I'm continually disappointed in Mitch McConnell," McGrath explained. "I mean, I think there's a pattern when he wasn't in the leadership, when he was in the minority, of obstructing in our country and just basically doing things that hurt people in our country for purely political reasons. And now that he's in the leadership, it's scary to me that — the priorities are what we really throw me. The first priority was the repeal of the Affordable Care Act without any replacement. And to try to push that through without a CBS score, without having the facts of what it would do to people, having to push it through at midnight. That's wrong, that's not America."

You can watch McGrath’s full announcement video below: