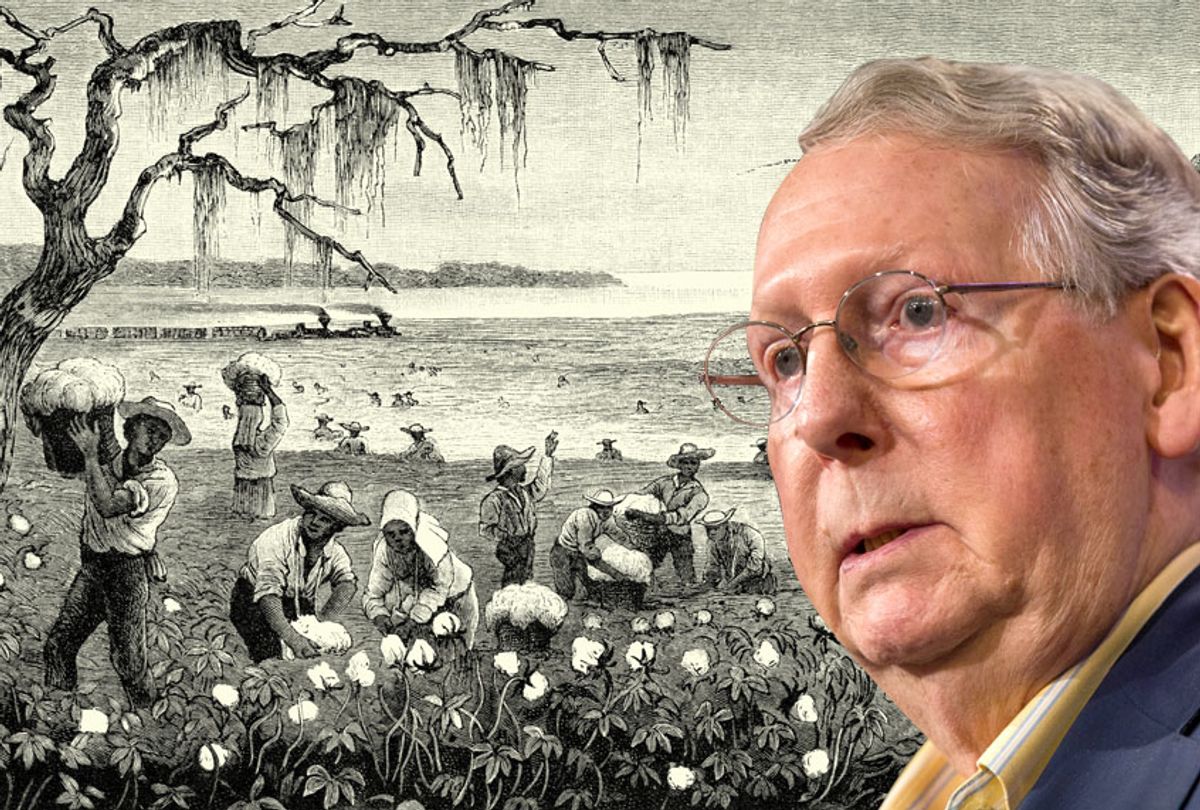 Census records from 1850 and 1860 reveal that two of McConnell's great-great-grandfathers, James McConnell and Richard Daley, owned in total at least 14 slaves — 12 of whom were female — in the years immediately preceding the Civil War, according to NBC News. The men lived in Limestone County, Alabama, and McConnell himself spent his early childhood years as an Alabaman before eventually moving to Kentucky.

One day before a hearing in the House of Representatives on the issue of reparations last month, McConnell made it clear that he opposed the measure.

"I don’t think reparations for something that happened 150 years ago — when none of us currently living are responsible — is a good idea. We’ve tried to deal with our original sin of slavery by fighting a Civil War by passing landmark civil rights legislation. We’ve elected an African-American president," McConnell said regarding the issue of reparations.

His reference to the election of former President Barack Obama was ironic, considering how he notoriously proclaimed after Obama took office that "the single most important thing we want to achieve is for President Obama to be a one-term president." That goal, of course, never panned out.

In response to McConnell's comments, author Ta-Nehisi Coates observed that the mistreatment of blacks did not end with the close of the Civil War.

"When it ended, this country could have extended its hallowed principles of life, liberty and the pursuit of happiness to all, regardless of color — but America had other principles in mind. And so, for a century after the Civil War, black people were subjected to a relentless campaign of terror — a campaign that extended well into the lifetime of Majority Leader McConnell," Coates told the House Judiciary Committee last month.

McConnell also bore firsthand witness to some pivotal moments in civil rights history, including Dr. Martin Luther King, Jr.'s 1963 "I Have a Dream" speech. As The Washington Post reported in 2015:

During college, he served as an intern in Washington and attended Dr. King’s “I Have a Dream” speech in 1963 — “You could see a massive throng of humanity down to the memorial” — and wrote a college editorial excoriating opponents of civil rights. He worked as an intern for [Sen. John Sherman] Cooper, opening mail, much of which was from constituents unhappy with the senator’s support for the Civil Rights Act.

Mr. McConnell, 73, recalled, as he often does, asking Mr. Cooper how he could handle the overwhelming pressure. His boss told him, “There are times when you are supposed to lead, and other times to reflect the views of your state, and I think it is time to lead,” he said. “That was pretty inspirational to a young guy just going to law school.”