"The president needs to answer for statements he has made about his relationship with Mr. Epstein," Schumer added 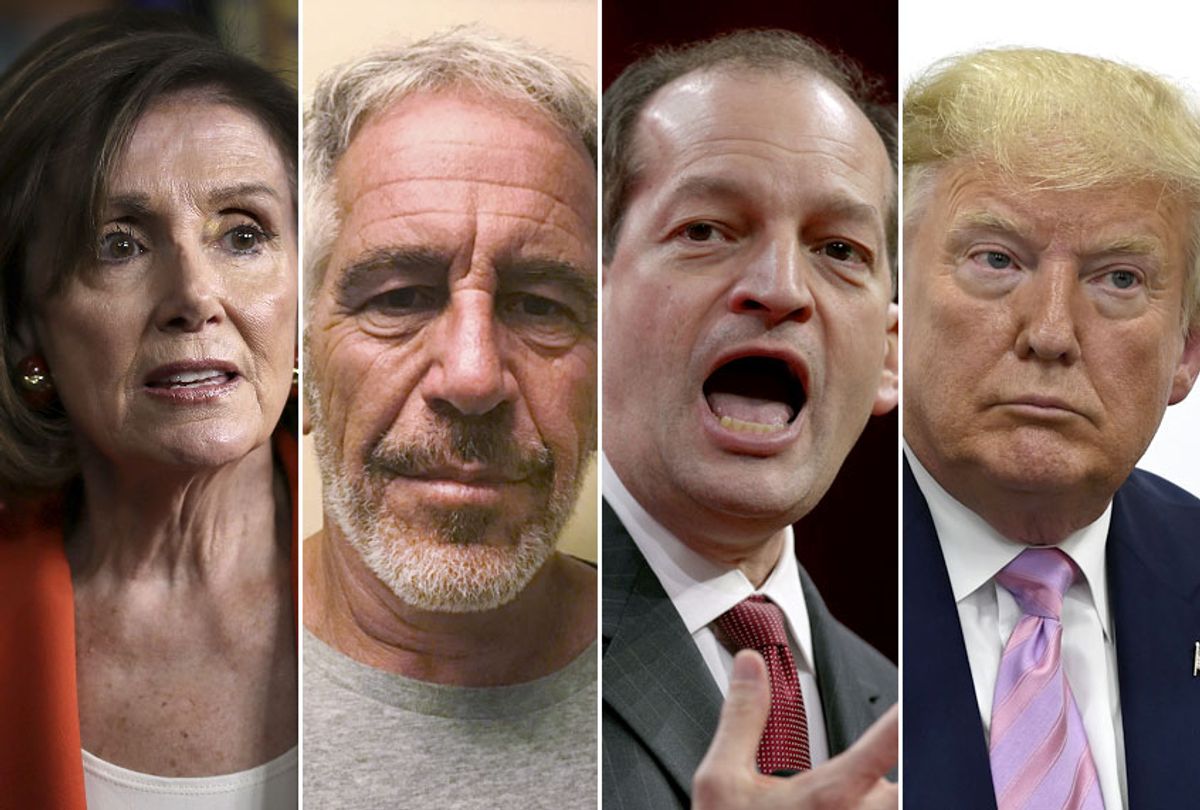 Speaker of the House Nancy Pelosi and Senate Minority Leader Chuck Schumer, the top two Democrats in Congress, have called on Alex Acosta, the labor secretary in President Donald Trump's Cabinet, to resign over his role in cutting what has been described as “the deal of a lifetime” with the billionaire Jeffrey Epstein in a decade-old sex trafficking case.

".@SecretaryAcosta must step down," Pelosi wrote in a tweet on Tuesday. "As US Attorney, he engaged in an unconscionable agreement w/ Jeffrey Epstein kept secret from courageous, young victims preventing them from seeking justice. This was known by @POTUS when he appointed him to the cabinet.”

Schumer added that "if [Acosta] refuses to resign, President Trump should fire him” as he drew attention to the commander-in-chief's controversial relationship with Epstein.

"The president needs to answer for statements he has made about his relationship with Mr. Epstein," Schumer said during a speech Tuesday on the Senate floor. "In 2002, he said he had known Epstein for 15 years, and he was ‘a terrific guy who enjoyed women on the younger side.’”

The quote given by Senate minority leader was based on a 2002 interview in New York magazine in which Trump described Epstein as a "terrific guy" and complimented his taste in women by stating, "It is even said that he likes beautiful women as much as I do, and many of them are on the younger side."

Schumer said "the president needs to answer for this” — a reference to Epstein's frequent visits to Mar-a-Lago — and added that "I don't not recall” was “not an acceptable answer in this case."

Acosta has come under renewed scrutiny in the wake of Epstein’s weekend arrest. While he was a federal prosecutor handling Epstein’s past case, he cut a secret non-prosecution agreement that forced a federal investigation into an alleged trans-Atlantic sex trafficking operation of underage girls to a close. My colleague Amanda Marcotte recently elaborated on Epstein’s sweetheart deal:

Epstein's case — at least until Trump was elected president — was the most iconic recent example of how much abuse a wealthy and powerful man can get away with. By the time he was arrested for sexual abuse of minors in 2008, Epstein had ensconced himself deeply in power, surrounding himself with famous and powerful friends like Bill Clinton, whom Epstein hung out with in 2002 and 2003, and Donald Trump, who in 2002 described Epstein as a "terrific friend" who liked women "on the younger side."

Thanks to Alex Acosta, who was then a U.S. attorney in Miami and is now Trump's labor secretary, Epstein got a plea deal in 2007 that makes a slap on the wrist look like the electric chair. The full details came out in a 2018 series from the Miami Herald, in which reporter Julie K. Brown exposed how Acosta allowed Epstein to escape federal charges, shield the identities of "any potential co-conspirators" and keep the details from victims, so long as he pled guilty to two minor state offenses. Epstein didn't even really serve the 18 months he agreed to, as he was kept in a private wing of the Palm Beach County jail and only stayed there at night, allowed out on "work release" for 12 hours a day, six days a week.

Acosta took to Twitter to defend himself Tuesday, claiming that "with the evidence available more than a decade ago, federal prosecutors insisted that Epstein go to jail, register as a sex offender and put the world on notice that he was a sexual predator."

He added, "Now that new evidence and additional testimony is available, the NY prosecution offers an important opportunity to more fully bring him to justice."

Trump, meanwhile, has defended his labor secretary, telling reporters that "if you go back and look at everybody else's decisions — whether it's a U.S. attorney, or an assistant U.S. attorney or a judge — you go back 12, or 15 years ago or 20 years ago and look at their past decisions, I would think you'd probably find that they would wish they maybe did it a different way."