Tom Steyer is back in the 2020 race: Will that shame Nancy Pelosi into action?

Just what we needed: another Democratic candidate. Only this one has a specific purpose: Impeaching Donald Trump 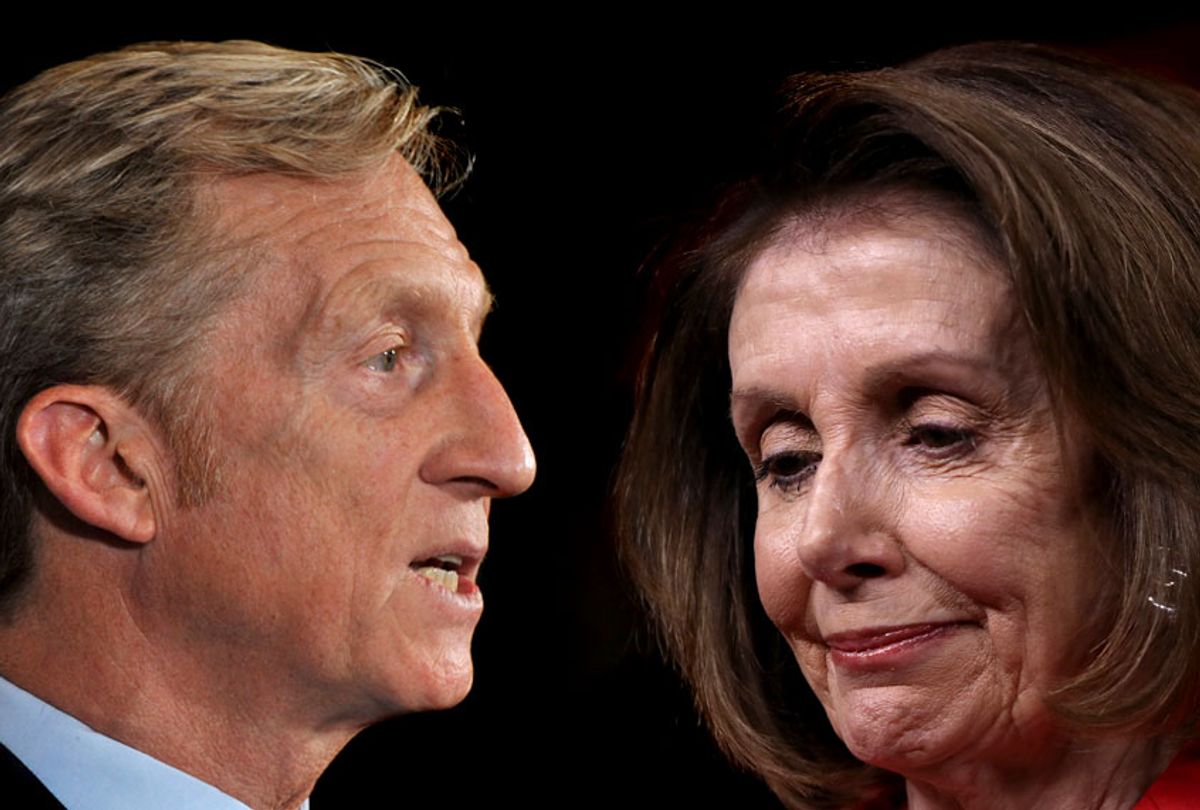 Nancy Pelosi’s strategy of slowly building the case for President Trump’s impeachment through congressional investigations appears more impotent with each passing day. It has been three months since special counsel Robert Mueller released his report implicating the president in multiple felony offenses. Instead of pouncing, Pelosi has slowly backed House Democrats away from impeachment hearings and now Trump has the highest approval ratings of his presidency.

Emboldened by the House speaker's hesitation, the Trump administration has grown only more brazen in its thwarting of attempts at congressional oversight. On Monday, Attorney General Bill Barr publicly pressured Mueller to not testify before Congress on July 17 and threatened to block any attempt by Congress to subpoena members of the special counsel’s team. Various members of the Trump administration have previously ignored congressional subpoenas. And as The Intercept’s Mehdi Hasan points out, Trump's lawyers cited Pelosi’s refusal to launch an impeachment inquiry to argue against honoring House Democrats’ attempts at oversight.

Meanwhile, Pelosi continues to hold steadfast to her bewildering strategy and has seemingly gone to war with her own base to get them back off the public pressure campaign ahead of the 2020 election.

In a divisive interview with New York Times columnist Maureen Dowd, Pelosi rehashed her tortured “self-impeachment” excuse for avoiding her constitutional duties. "The thing is that, he every day practically self-impeaches by obstructing justice and ignoring the subpoenas,” Pelosi said about Trump.

If Trump has done things worthy of impeachment, doesn't the House have an obligation to impeach? After all, an impeachment inquiry is a straightforward constitutional duty. The idea that Congress needs to wait for the federal courts to confirm that the legislative branch has the right to exert its constitutional powers, even when the White House refuses to recognize them, only serves to delay the whole process until an election year, meaning it probably won't happen at all. Congress has the power to compel testimony and disclosure, and a refusal to cooperate should be enough to begin impeachment hearings to prove the violation. Instead, Pelosi and the leadership swatted down calls for impeachment and waited six months before taking Trump to court over his tax returns.

For his part, Trump has taken advantage of the leadership vacuum and has spun Pelosi’s inaction as an exoneration. Barr also announced on Monday that the administration will now not only defy Congress but also the Supreme Court by adding a citizenship question to the decennial census via executive action.

New polling shows that impeachment is unpopular in five key swing districts won by Democrats in 2018. It is likely those numbers that scare Pelosi away from using her power. But as the Watergate hearings showed, public sentiment won’t change without a public inquiry. The case for impeachment must be made publicly and loudly.

This is likely why billionaire Tom Steyer has reportedly decided to join the presidential race after initially opting to focus on funding congressional campaigns. Steyer launches his campaign just as Rep. Eric Swalwell, D-Calif., became the first Democrat to drop out, opting to run for his House seat instead.

The "total stonewalling of the Congress’ power by the administration with a degree of contempt and arrogance is startling,” Steyer told Salon. “Trump doesn’t believe in equal powers, or oversight, or laws or the Constitution. The American people can see it.”

Steyer’s public case for impeachment stalled out after he initially bowed out of the presidential race six months ago but his group, Need to Impeach, recently released a $1 million ad buy for national networks in New Hampshire and Iowa, criticizing Democratic Party leaders for doing nothing.

“Every day, the leadership of the Democratic Party admonishes Donald Trump’s pattern of reckless lawbreaking and corruption. But when pressed about what they plan to do about it, they fail to act,” Steyer said in May. “All the political arguments about why it is smart to shield Trump don’t make any sense and are not borne out by the facts.

“This president is clearly trying to run out the clock,” he explained. “And to the extent that Democrats ... enable him to be a president who has a few differences with Congress but who is otherwise a normal president working on a bipartisan fashion to get things done for Americans — to the extent that is true, that will in fact take impeachment off the table. That will in fact take the power out of the hands of the American people. That will in fact spike the effort and make it irrelevant what the American people ultimately want.”

Now more than 80 Democrats in the House, including five Democrats who represent competitive districts, along with former Republican Rep. Justin Amash of Michigan (now an independent) support launching an impeachment inquiry over Trump's potential obstruction of justice. So does every major Democratic presidential candidate. If Democrats don't open impeachment hearings when the executive branch refuses to abide by congressional subpoenas, or turn over required taxes, or abide by Supreme Court rulings, then what justification do they hold for calling themselves an opposition party?